Gov. Brown responds to UC-related bills as part of package 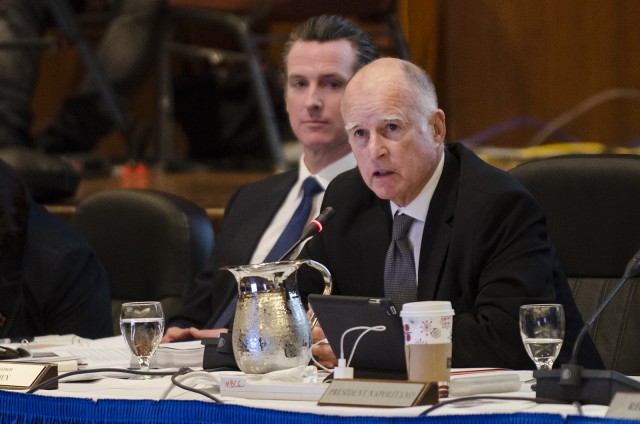 Gov. Jerry Brown responded to a 61-bill package this weekend including bills that could have a direct impact on the University of California and its systemwide policies. (Daily Bruin file photo)

Gov. Jerry Brown responded to a 61-bill package this weekend including bills about gun control, voter registration and sexual assault policies that could have a direct impact on the University of California and its systemwide policies.

The bills that have been signed by Brown are subject to UC Board of Regents’s approval.

The bill, which was signed Wednesday, requests the UC, and requires California State University and other California Community College campuses, to ensure housing facilities for homeless college students.

The bill calls for the UC to ensure housing for former foster and homeless youth. Students under the age of 25, if they were considered homeless anytime during two years prior to applying to the University, would be accommodated.

Rebecca Trounson, a spokesperson for the UC, said UC campuses work in a variety of ways to support students who are homeless, including providing them with emergency financial support, temporary housing, food and connecting them with community resources.

Jessica Franey, co-chair of the Homelessness Prevention Clinic and a graduate law student, said she thinks the bill will prove beneficial to students who do not have a home to go back to for winter and summer breaks.

“At the time when we go out for holidays and visit our family and friends there are some people who don’t have a home to go to,” she said. “This will help out a lot.”

Trounson added since the bill has just been signed, it is too soon to know how the campuses will respond.

Brown vetoed a bill Sunday that would have required the governing boards of the UC and other California colleges to establish standard processes in dealing with claims of sexual assault.

AB 967 would have required the UC to adopt and carry out a uniform process, applicable to each campus of the institution, for disciplinary proceedings relating to any claims of sexual assault.

The bill would have also required the UC to release annual data and have standard punishments of suspension and expulsion for cases.

In a letter vetoing the legislation, Brown said the bill would deprive professionals of using their judgement according to the circumstances.

He added he thinks the state should not directly mandate the governing and disciplinary processes of the universities.

Chrissy Keenan, co-director of the Bruin Consent Coalition and a fourth-year human biology and society student, said she was disappointed about the veto as student survivors and advocates were in support of the bill.

Keenan added, however, the model for a systemwide policy for the UC to respond to cases of sexual assault will be finalized by end of this quarter.

Brown signed a bill last Wednesday that updated protocol for the treatment of research animals within California universities.

AB 147 dictates that state institutions, including the UC, must give all dogs and cats used for scientific research to animal adoption organizations after being used for research, if they are deemed healthy enough.

In February, the UC Office of the President wrote a letter to the state legislature opposing AB 147. It stated that the new bill could limit the University-wide practice of direct adoption, a process run independently by the UC on a campus-by-campus basis.

During the direct adoption process, campus veterinarians evaluate dogs and cats who have undergone research and testing, assessing factors such as the animal’s health and the health condition of the person or organization adopting the animal.

If the dog or cat is deemed suitable for placement in a new home, the campus oversees the adoption itself instead of giving the animal to a local shelter or third-party agency.

Trounson said that the UC has since withdrawn its opposition of the bill. She added that AB 147 will not require UC schools to change their policy since they already have guidelines supporting the adoption of animals.

Discussions about post-research adoption arose in 2014 when the UC opposed AB 2431, a bill which required universities to offer dogs and cats up for adoption if the university planned to euthanize them.

In a letter to the state legislature that year, the UC argued that some dogs or cats may not be suitable for adoption after undergoing research, namely if the research exposed them to infectious agents or non-FDA approved drugs. They also said certain studies required euthanization of these animals for additional tissue collection or procedures, so enforcing adoption could inhibit the research.