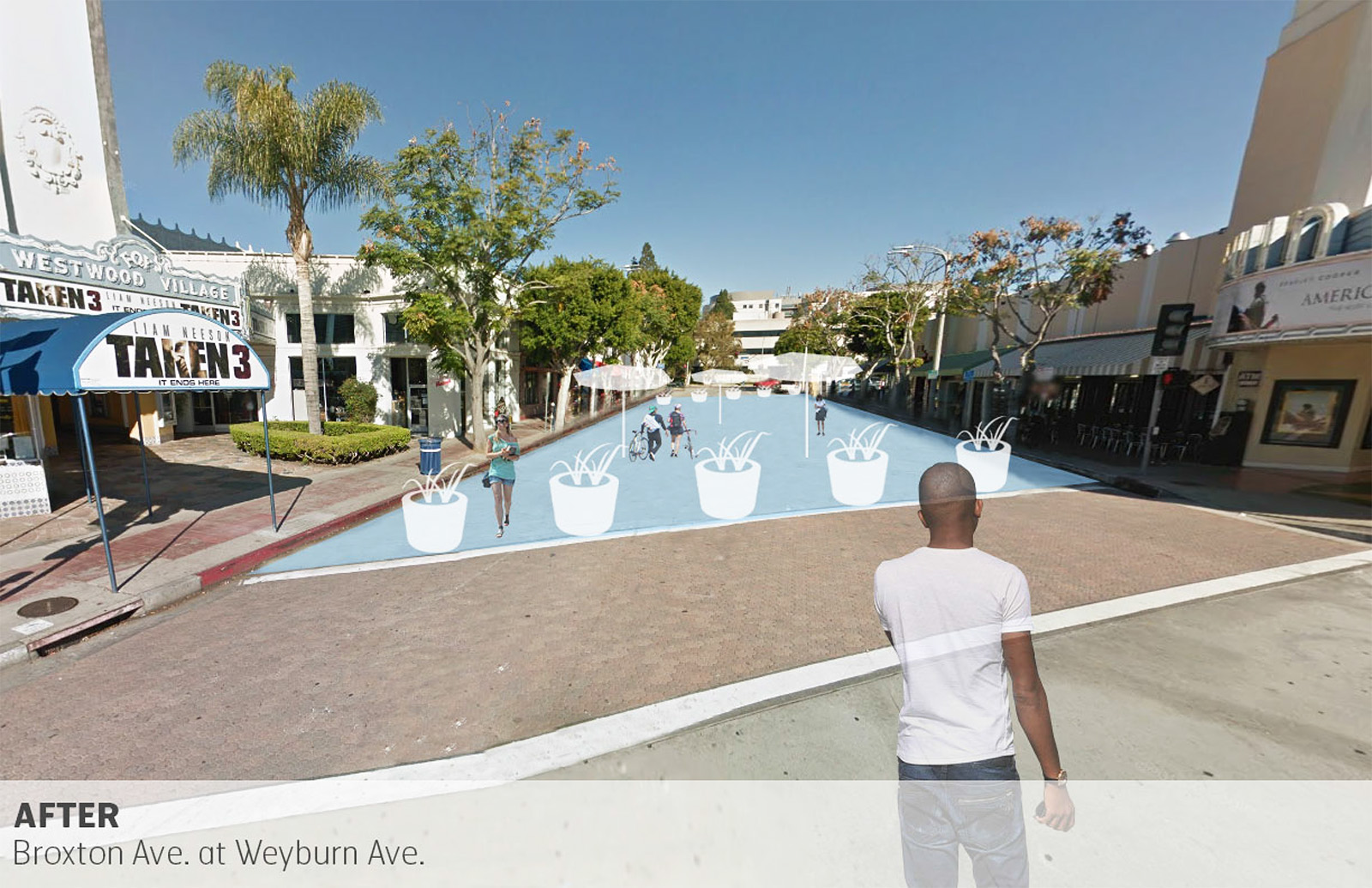 Broxton Avenue will be considered to become a plaza with space for umbrella tables and walking in December. (Courtesy of the Westwood Village Improvement Association)

Westwood officials announced Wednesday that they will propose turning a portion of Broxton Avenue, including the block that houses Diddy Riese, the Regency Bruin Theater and the Regency Westwood Village Theater, known as the Fox Village Theater, into a plaza for community events.

The Westwood Village Improvement Association, also known as the BID, will apply to create the plaza by December through a Los Angeles Department of Transportation program called People St, which offers adding plazas, parklets and bike corrals to existing streets.

If the application is successful, LADOT officials would convert the portion of Broxton Avenue between Weyburn Avenue and the alley south of Le Conte Avenue into a space for walking, tables, eating and outdoor events.

The BID started a petition Wednesday to allow the public to show support for the plaza. LADOT will ultimately decide whether part of Broxton Avenue will be converted into a plaza.

Andrew Thomas, executive director of the BID, said he thinks creating the plaza can create more walking space and make the Village a place more people want to visit. He said he wants the Village to offer a similar ambience to that of the Grove or Third Street Promenade.

LADOT will announce their decision early next year, Thomas said.

He added drivers will no longer be able to access Broxton Avenue via Le Conte Avenue because the plaza will block off the traffic, but he thinks it will not affect traffic much because Broxton Avenue does not have as much traffic as Westwood Boulevard or Gayley Avenue.

He added LADOT would pay for the plaza’s installation, but the BID would be responsible for its maintenance. Thomas said he did not yet have an estimate for potential maintenance costs.

Evan Keasley, manager of Mon Amour Cafe on Broxton Avenue, said he thinks the plaza will add more foot traffic to the street, and could increase his sales.

Others said they think the new plaza will limit access to Westwood Village businesses because it would close off the street.

Kimberly Brown, a manager at BJ’s Restaurant and Brewhouse on Broxton Avenue, said she thinks the plaza will create more traffic that will discourage people from going to the Village.

She added BJ’s lost customers when Broxton Avenue was closed for movie premieres earlier this month, and she thinks the plaza will have a similar effect.

Steve Sann, chair of the Westwood Community Council, said he thinks the plaza will limit access to the Broxton Avenue Public Parking garage because closing the street would make it difficult for cars to access the garage.

He added he thinks the BID should focus more on long-term concerns, such as sidewalk repairs and maintenance, instead of creating the plaza.

Thomas said if the Broxton plaza is approved, it would be installed by next spring.