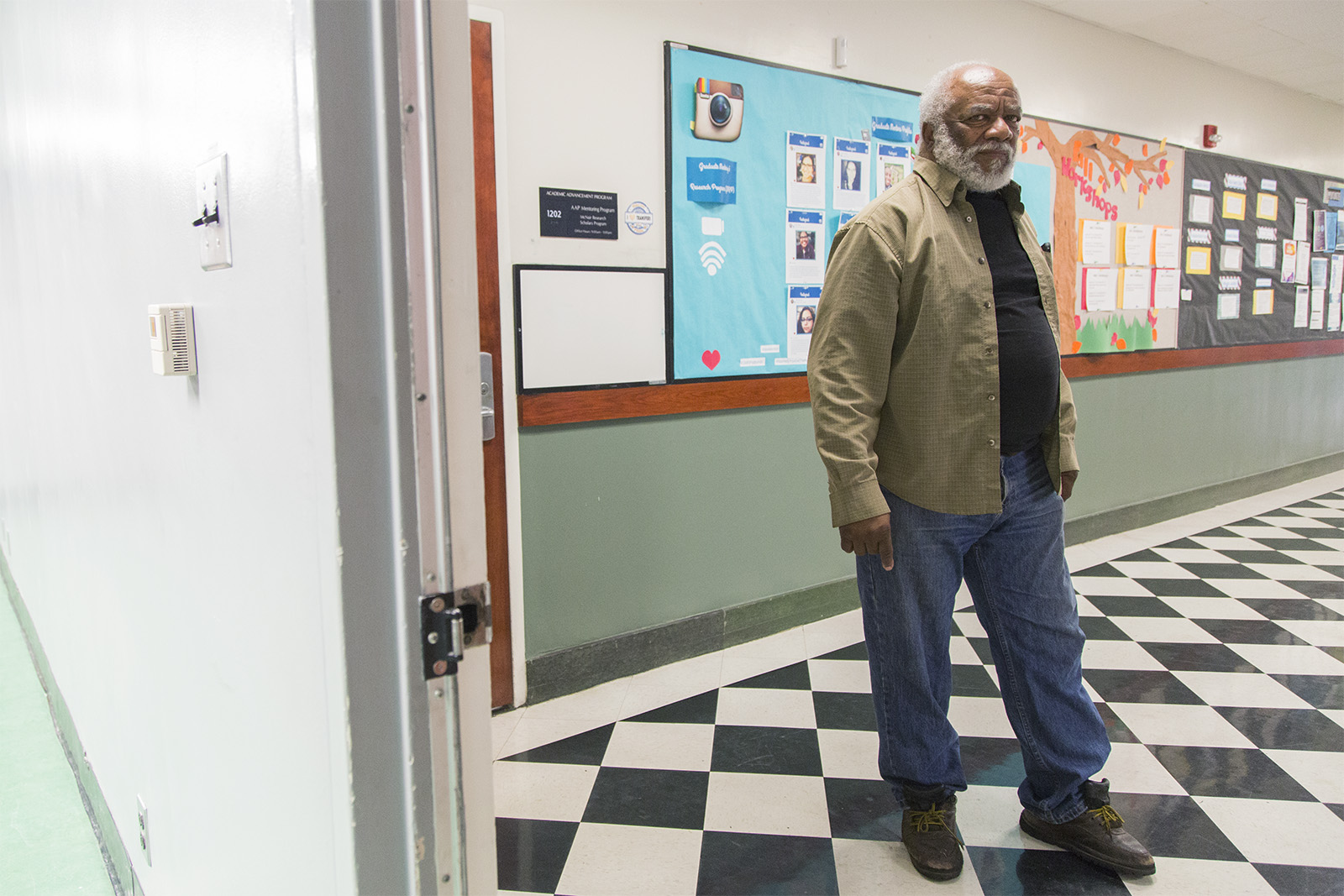 J. Daniel Johnson returned to Campbell Hall last week to stand in the same spot where two Black Panthers were shot in front of him 46 years ago. Here, he is standing at the entrance to Room 1201. (Owen Emerson/Daily Bruin senior staff)

The article was edited to clarify that John J. Huggins was armed.

J. Daniel Johnson stands at the entrance to Room 1201 in Campbell Hall and greets almost every passerby with a warm smile, handshake and a “How you doing, brother?” or, for the ladies, “How are you, sweetheart?”

But inside, Johnson, 68, feels a little nervous, as he always does whenever he is inside Room 1201.

It is the place where he saw John J. Huggins, 23, and Alprentice “Bunchy” Carter, 26, who were members of the Black Panther Party, shot and killed on the afternoon of Jan. 17, 1969 at about 2:40 p.m. The shooting happened during a meeting to develop a process to choose a director for the new black studies program at UCLA. Johnson was a 21-year-old fourth-year political science and sociology student at the time, and was chairing the meeting along with one of his friends.

Even though much of Campbell Hall, including Room 1201, has been reconfigured since the shooting, Johnson still remembers what transpired one January afternoon with absolute clarity.

Johnson gestures toward the long row of black-and-white checkered tiles that line the hallway, showing how the bullets flew from a gun of Huggins, who was armed. “Right here is where John Huggins fell,” he added, pointing along the front wall inside Room 1201. “And over here, behind where this chair is, is where Bunchy Carter died.”

Johnson said he remembers that the meeting had ended, and a man named Harold “Tuwala” Jones, 19, came into the room. Huggins confronted Jones about harassing a leader of the Black Panther Party, Elaine Brown. Jones cursed Huggins, and Huggins hit Jones in return. Carter tried to break up the fight before Claude “Chuchessa” Hubert, 21, entered the room and shot Huggins in the back. Carter took cover behind a chair, but Hubert shot him with a dum-dum bullet – a type of ammunition that expands when it hits a target – and it blew a hole in Carter’s chest, killing him instantly, Johnson said. Huggins died later, after he was taken to the hospital, he added.

When Johnson first heard the gunshots, standing just a few feet away from Huggins and Carter, his first thought was to save his wife, who had come into the room after the meeting ended.

“I threw her against the wall and got on top of her to shield her from harm,” Johnson said.

The shooting shook up the leadership in the High Potential Program, a program whose aim was to admit more minority students to the university, Johnson said. The members had to rebuild and reestablish the organization.

“Tensions were very high on campus, but we got back to business,” he said.

Johnson’s drive to improve conditions for minority students at UCLA through the High Potential Program and other organizations is still going strong, 46 years later.

Most recently at UCLA, he spoke Thursday on a panel about black activism for members of the Afrikan Student Union, which he originally founded in 1966 as Harambee, and a year later renamed it the Black Student Union. In addition to the High Potential Program, he is a member on the board of directors of the UCLA Black Alumni Association, the Alliance for Equal Opportunity in Education – a group of organizations originally formed by UCLA alumni in the UCLA Black Alumni Association, the Urban League and the NAACP.

Johnson first came to UCLA in the fall of 1964 as an undergraduate, and it was the first racially integrated school he attended. He also worked at UCLA as one of the first peer counselors from 1968 to 1972. He came back to pursue a master’s degree in public health program at UCLA in 1974, which he didn’t finish. From 1977 to 1987, he worked for Norm Miller, the vice chancellor of student affairs, and returned again to the university as a researcher from 1993 to 1998.

Everett Wells, Johnson’s oldest acquaintance from his undergraduate career at UCLA, said Johnson had a persistent interest in leadership and change, even while he was a student.

“It was a very active period of the civil rights movement … and he was very active in bringing many advocates and leaders to speak on campus,” Wells said. “There were speeches in Meyerhoff Park every day, oftentimes more than one.”

Johnson said he originally decided to come to UCLA at the age of 12 because of two individuals: Ralph Bunche, a 1950 Nobel Peace Prize winner, and Jackie Robinson, the first black major league baseball player.

“I thought UCLA would be the best school in the country if they came out of there,” he said.

Growing up in Alabama, Johnson only attended all-black schools, because the laws of segregation were not repealed until the year he graduated from high school – 1964. Neither of his parents were highly educated; his mother was forced to drop out of school at age 11 because of her failing eyesight, and his father had to get a full time job at a salt mill when he was 12 years old because his father died and he had to support his family on his own.

When Johnson got to UCLA, he was one of 100 black students admitted, and most of them were athletes, he said.

Virgil Roberts, a UCLA alumnus and one of Johnson’s friends in the Black Student Union, said he first met Johnson playing flag football with his Rieber Hall team. But Roberts remembers Johnson more vividly for his political demonstrations.

Johnson led one sit-in at the vice chancellor’s office after some black students were assaulted in a bowling alley in South Carolina, Roberts said.

“I have this image of him wearing combat boots and jumping on the desk of the vice chancellor and demanding that she send out a response (to the assault),” he said. “It wasn’t long after that that she retired. That was the reason she quit, because of him,” Roberts added with a laugh.

Roberts said there was a lot of agitation in the campus climate in 1967. Many minority groups, including Latinos and Asian-Americans, wanted more recognition and inclusion from the university, he added.

“What sometimes gets lost is that a lot of the change that took place – civil rights, gay rights – that was all started by (students),” he said. “All those movements were converging at the same time at UCLA and around the country.”

Charles E. Young, former chancellor of UCLA and professor in the UCLA School of Public Affairs, said he met Johnson in 1967, two years before he became chancellor of the university. Johnson was driven to accomplish change at UCLA for black students before many other students were, he said.

“Essentially, he was pressing for things in the direction I wanted them to go,” Young said. “I think it is fair to say that he and his colleagues were a bit ahead of me, and helped me move forward to where they were.”

Young added Roberts and Johnson helped create programs to admit more minority students and develop the black studies center, making it possible to do things at UCLA that were not done anywhere else at that time. Although some faculty members opposed Johnson and Roberts’ work, including some of Young’s best friends, Young said Johnson and Roberts made him aware of the issues black students faced and they illustrated the importance of addressing those issues.

“They piqued my conscience and allowed me to move to where I should have been,” he said.

Johnson continues to address those issues for black students now. He comes to campus at least once a month to meet with the administration and work on the High Potential Program, now called the Academic Advancement Program, which is still located in Campbell Hall. Today, he is a husband of 47 years, a father of six, and has recently welcomed his eighth grandchild.

At the panel on Thursday, Johnson urged ASU members to change UCLA in their own way.

“The stuff we did, you can’t do again,” Johnson said to the panel audience. “Look at yourself in the mirror and identify yourself as a person to make that change.”