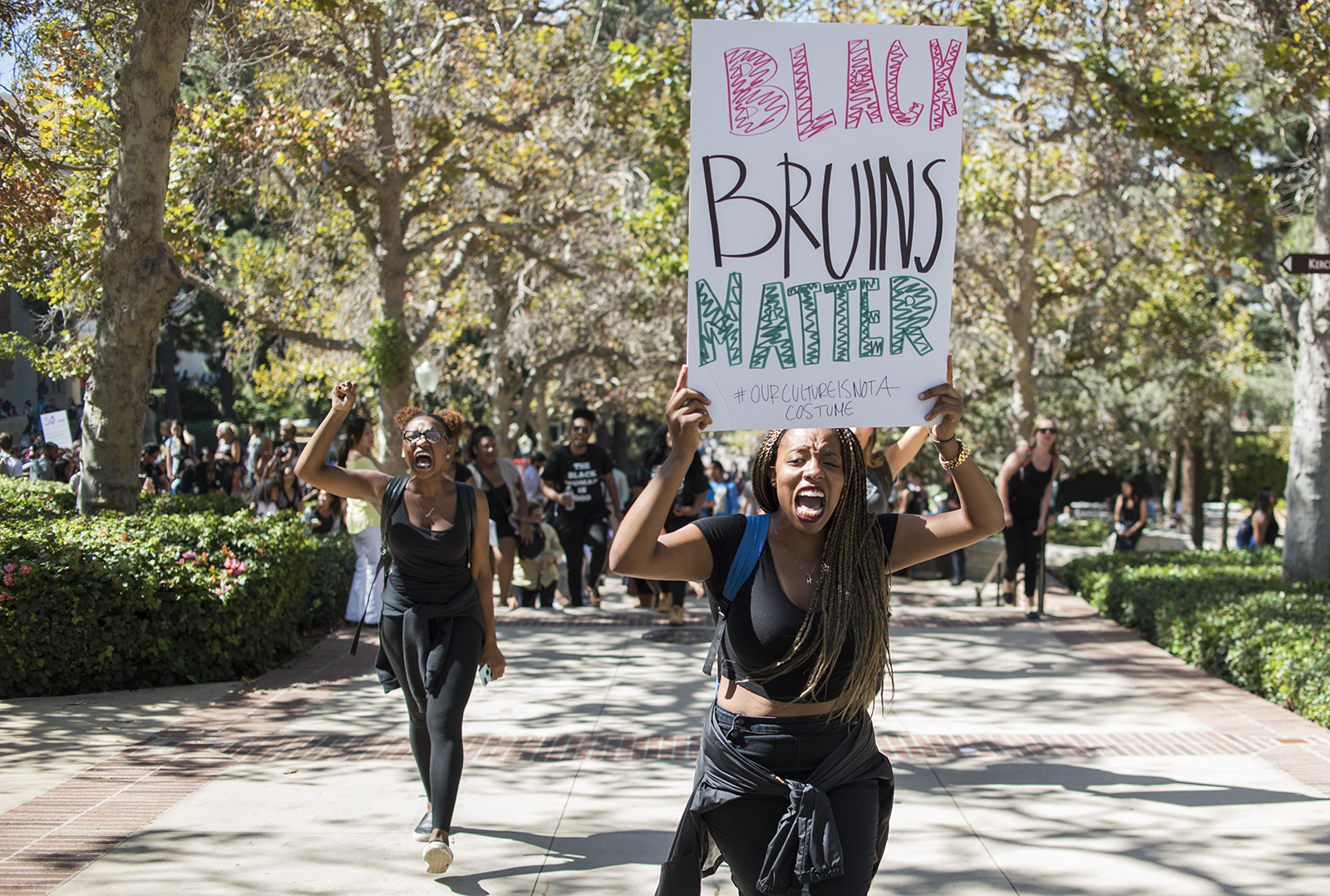 Students marched to Murphy Hall chanting “Our culture, not a costume,” among other chants. (Daniel Alcazar/Daily Bruin senior staff)

By Shreya Maskara and Andrea Henthorn

About 200 protesters held signs with messages such as “Black culture is not a theme,” and chanted “Black Bruins Matter,” among other messages.

At the raid, which many students described as racist, partygoers dressed in baggy clothes, plumped lips and padded bottoms. Some students were also seen with brown paint and black soot on their faces.

Jerry Kang, vice chancellor for equity, diversity and inclusion, said both Alpha Phi and Sigma Phi Epsilon have been placed on immediate interim suspension of all social activities pending the outcome of an investigation.

Within minutes of the start of Thursday’s rally, members of the Afrikan Student Union chanted and marched up Bruin Walk, gathering over a hundred followers before stopping to speak in front of Kerckhoff Hall. Those in the crowd called the partygoers’ acts shameful.

“(Our culture) is not a costume,” students chanted.

Chibunkem Ezenekwe, a first-year undeclared student who saw students dressed up at the fraternity house Tuesday night, said she thinks the incident reflects what she calls a climate unwelcoming of black students.

Ezenekwe said she was upset to see students represent her culture by wearing baggy pants, stuffing their butts and wearing paint on their faces.

“This was my introduction to being a black Bruin on campus – to being an adult,” she added.

Jewel Bourne, a fifth-year English and gender studies studen and member of the Afrikan Student Union, said she learned of the party through social media, and said she is incredibly angered.

“The saddest part is I’m not surprised,” Bourne said.

Bourne said she feels people question whether she belongs at the university because she is black.

Protesters then marched from Meyerhoff Park in front of Kerckhoff Hall to Murphy Hall, stopping in front of the UCLA Title IX office and Block’s office.

UCLA alumna Marci Brooks, who graduated in 2013, said she intended to study English when she came to UCLA, but changed her major to African American studies after observing the campus climate.

Brooks said the low representation of black students on the UCLA campus is problematic, and there is no opportunity to foster black culture when so few black students are admitted.

Kamil Oshundara, a board member of the Afrikan Student Union and second-year world arts and cultures student, said she thinks the students dressed up at the party represented a culturally appropriated image of the black community.

“You cannot just pick and choose which parts of black culture you want to exhibit,” she said.

Oshundara said she thinks the problem arises when students on campus don’t understand issues black students experience and fail to acknowledge the presence of racism on campus.

“Chains, rings and baggy clothes don’t define our community,” she said. “Students need to understand that is cultural appropriation and racism.”

“I want to underscore as an individual, first, that Black Bruins Matter,” Kang said.

He added the way the fraternity and sorority members acted was condemnable, though not illegal, and called the event an act of grotesque minstrelsy.

Students are free to celebrate in ways that draw on popular culture, but their specific choices can cause harm and pain to fellow members of their community, the university said in an email statement Wednesday.

“Put simply, just because you can do something does not mean you should,” the statement said.

Members of the Afrikan Student Union said the raid was insensitive, and the fact that it was held during Black Bruin Welcome Week made the matter worse. This week, coordinators hosted activities such as a convocation for alumni, students and staff to gather and discuss what it’s like to be black individuals at UCLA.

Janay Williams, an ASU chairperson who witnessed students covered in brown paint and black soot Tuesday night in an attempt to portray the complexion of black students, called out to the chancellor outside his office on the second floor of Murphy Hall.

“We hope the chancellor hears us, and the world hears us, because the truth is that UCLA is racist,” yelled Williams, a fifth-year ecology and evolutionary biology student.

Williams added ASU students and alumni will present a list of demands to the UCLA administration by Monday. The demands are intended to help make the campus climate more comfortable for black students, she said.

ASU is urging the chancellor to admit the incident was an act of racism, Williams said. She added she hopes to address these concerns in meetings with UCLA administration, and ASU will respond with a larger protest if the administration doesn’t respond to its demands.