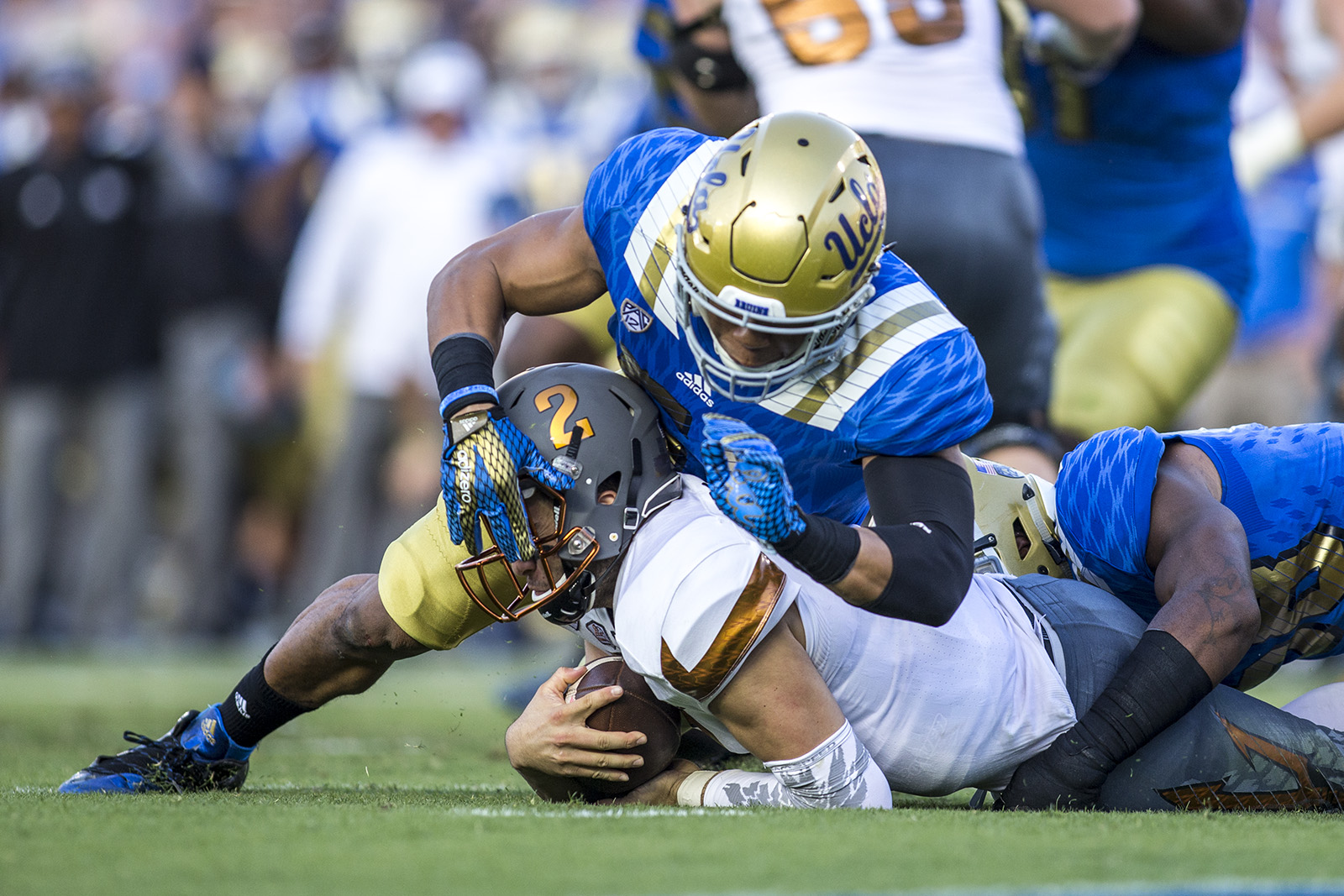 Redshirt senior Aaron Wallace (left) and junior Deon Hollins brought down Arizona State quarterback Mike Bercovici last Saturday. The linebackers were part of a Bruin defense that was strong for much of the UCLA loss. (Aubrey Yeo/Daily Bruin senior staff)

This week, Daily Bruin Sports takes a look at the UCLA defense and its overlooked performance against Arizona State last weekend.

In the fallout of UCLA’s upset loss to Arizona State, in the wave of negative story lines surrounding the Bruins, no one talked about one of the few positives for the team – the defense’s performance. On a night where the team’s offense and special teams stuttered, the defense for the most part played well. Despite being on the field for over 37 minutes, the unit did all it could to keep the Bruins in the game.

Junior inside linebacker Isaako Savaiinaea was a huge part of this, leading the team with 15 tackles and a crucial interception late in the game. A week after junior linebacker Jayon Brown’s injury ruled him out of this game and gave the injury report another blemish, Savaiinaea proved a crucial performer, stepping into his shoes ably.

The defense played best in the first half, holding ASU to only 15 points. It only gave up one touchdown, that too when forced to contend with a short field after Tim White’s 63-yard kick return in the first quarter. Aside from that, the defense was stingy, conceding yards early, but tightening up in the red zone. The stats tell the story: ASU had nine drives in the first half; they only scored off three of them.

“I thought we started the game sharp on defense,” said defensive coordinator Tom Bradley. “We came out and I felt we were doing the right things, that we had them right where we wanted them. Unfortunately, we couldn’t do anything about the field position early in the game.”

The defense’s performance gave the offense some breathing room, pivotal for a unit that offensive coordinator Noel Mazzone said really struggled to build a rhythm in the first half. However, the Bruins failed to capitalize on this chance in a miserable third quarter; both offense and defense were overrun, giving up two scores and allowing ASU to take a commanding 29-10 lead.

But the defense tightened up again at the start of the fourth quarter, as UCLA’s offense found its feet and the Bruins began to rally. Twice in the quarter UCLA needed stops, and twice they got them. The first came after a touchdown that cut the score to 29-16, Savaiinaea’s pick gifting the offense excellent field position with a chance to claw within six points. They would do just that, and once again the Bruin defense came up with a key stop, holding the Sun Devils outside of field goal range.

On another night, those two stops could have made the difference. A few bounces, some better luck and the defensive performance would have made headlines. But fate didn’t smile on the Bruins Saturday night.

The defense’s performance wasn’t perfect – just look at ASU’s three second-half scoring drives, rife with missed tackles and blown assignments. But for most of the game, it was the only aspect of the Bruins with a pulse, something they will look to build upon during this bye week.

“You can’t dig yourself into a deep hole right at the start there, you know, it’s hard to come back from that,” said Savaiianea. “But I’m proud of the way we played, and we’ll go back, look at the film and try to improve for next time.”