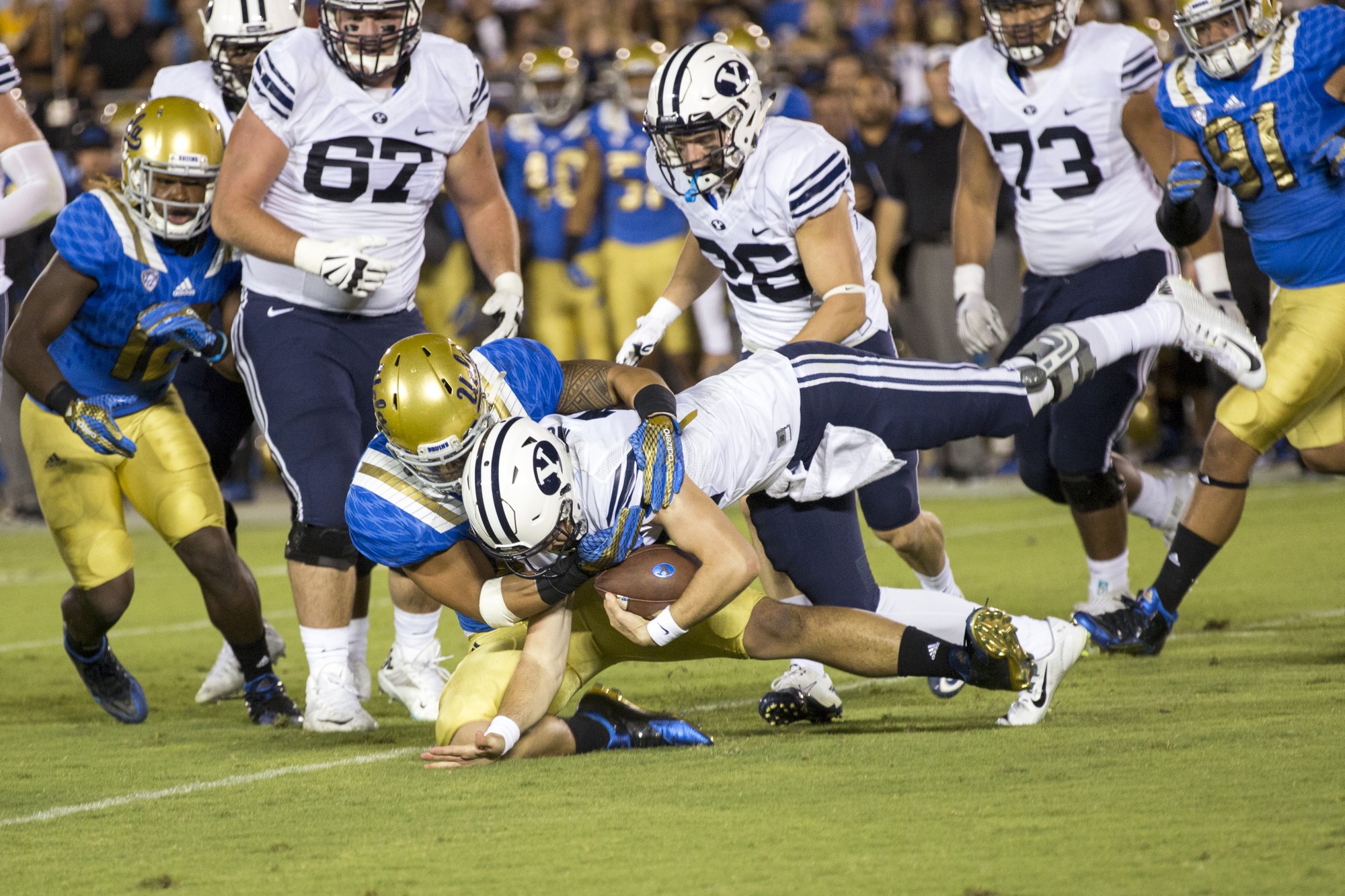 PASADENA — Isaako Savaiinaea had waited a long time for an opportunity to play with UCLA’s first-team defense in a big-time game.

“I’ve always been prepared,” the junior inside linebacker said. “If this day comes, then I’ll be ready.”

The day came on Saturday against No. 19 Brigham Young University (2-1). Savaiinaea, a second-string inside linebacker, had to step in for sophomore inside linebacker Kenny Young after Young was ejected early in the first quarter.

With only two career starts – both coming back in 2013 – Savaiinaea didn’t have much to fall back on; he just had to go.

Fellow junior linebacker Myles Jack had no doubt that Savaiinaea would shine.

“Isaak’s been ready to go,” Jack said. “Isaak’s played big games – he played against Stanford when (Eric Kendricks) got hurt (in 2013).”

Savaiinaea played as well as a second-string player could play. As a matter of fact, he played as well as anyone on the UCLA defense on Saturday. The junior finished Saturday’s game with a team-high 14 tackles and 1.5 sacks, leading No. 10 UCLA to a 24-23 victory.

“Without Isaak, I don’t think we win that game,” said junior weakside linebacker Deon Hollins. “He came in and didn’t miss a beat.”

There were many opportunities where Savaiinaea could have panicked. He was tasked with facing a quarterback with scrambling potential, but he maintained his gap integrity. He was asked to cover BYU’s physical receivers in the slot on certain occasions, but never got burned. And, most important of all, he had to assume Young’s leadership role as the “Mike” linebacker in UCLA’s 3-4 defense – and did just that.

“He did a great job,” said defensive coordinator Tom Bradley. “He adjusted very well, got us lined up. And I thought he did a really good job taking on a leadership role.”

Savaiinaea helped the UCLA defense gain some momentum in a game where it desperately needed it. The Bruins’ offense was struggling to get going for much of the game, but Savaiinaea provided some key plays to keep the Cougars from pulling away. With BYU driving inside the UCLA 35-yard line late in the second quarter, Savaiinaea got into the backfield and forced a sack on third-and-2.

That sack would prove pivotal, as it kept BYU out of field goal range and prevented the Cougars from putting up the additional three points that it would eventually need to pull out the victory.

As the game came down to one final offensive possession for BYU, Savaiinaea was in as big a situation as ever. If he slipped up and allowed a big play, UCLA’s chances at the College Football Playoff may have been extinguished. But this was the moment he’d been working so long for, and he wasn’t about to let it go to waste.

On BYU’s final play, Savaiinaea was in one-on-one man coverage with BYU’s 6-foot-5 slot receiver Terenn Houk. Houk ran over the middle on a deep in route toward the first down marker, and BYU quarterback Tanner Mangum looked for him; but Mangum couldn’t throw – Savaiinaea’s coverage was too good. Seconds later, UCLA made the game-winning interception, and Savaiinaea was able to relish the moment.

“The win still hasn’t hit me yet,” Savaiinaea said. “It came down to the last seconds and it’s one of those (moments), you can’t describe what you’re feeling right now. It’s just like cloud nine.”