Royce Hall usher to enter spotlight with premiere of his composition 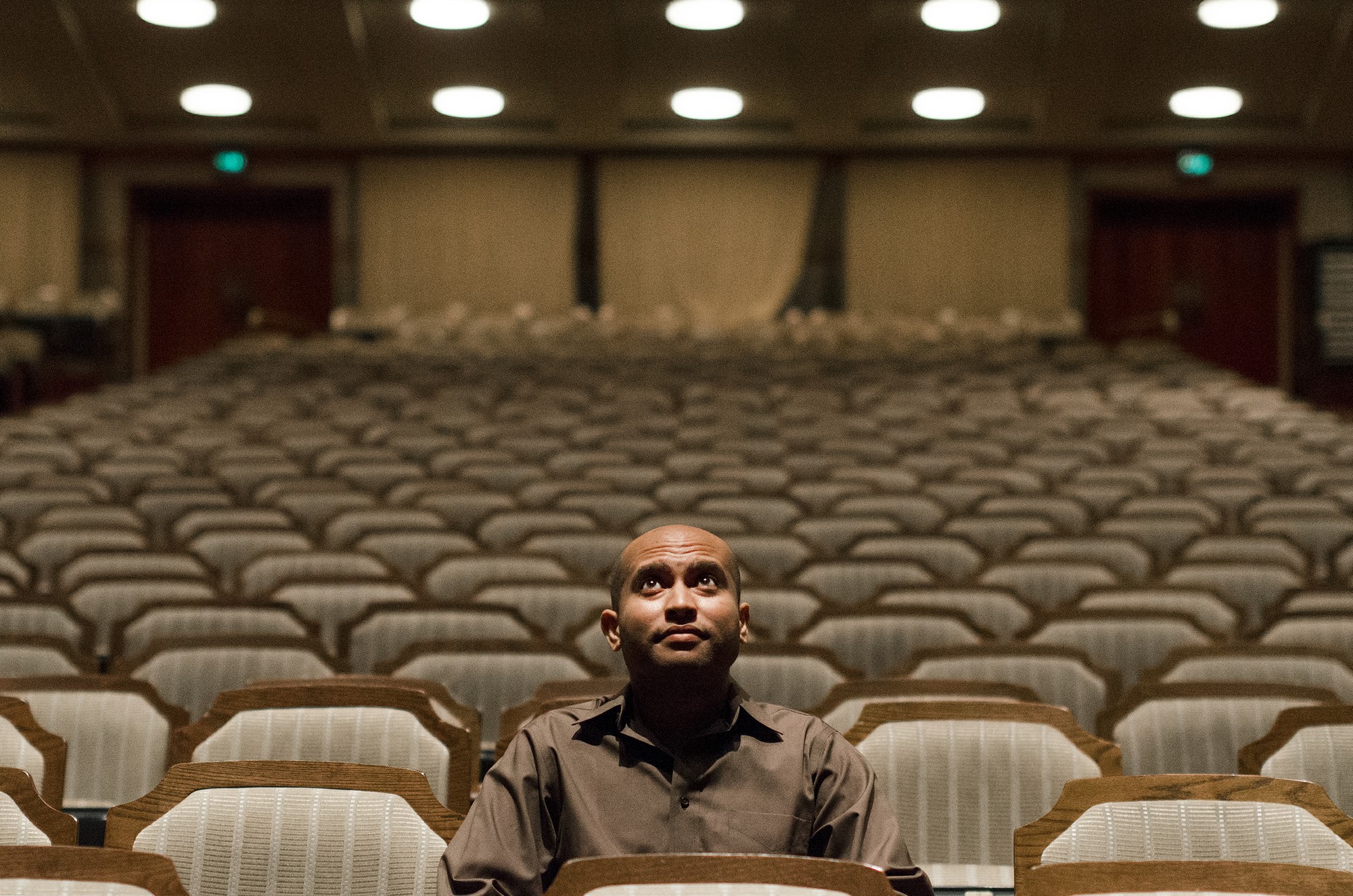 Alumnus Derrick Spiva Jr. is head usher at Royce Hall. On Sunday, he will take his place in the audience to watch the Los Angeles Chamber Orchestra perform his own composition. (Miriam Bribiesca/Daily Bruin senior staff)

Derrick Spiva Jr. typically stands in the back of Royce Hall listening to world-class performers on his breaks as head usher.

Instead of showing guests to their seats, the alumnus will join them in the audience for one night. Taking his seat in the grand auditorium, Spiva will watch the curtain open on the premiere of his own orchestral composition.

The Los Angeles Chamber Orchestra is performing Spiva’s West African inspired piece, “Prisms, Cycles, Leaps,” at Royce Hall Sunday. The premiere coincides with the release of his album of the same name. Though Spiva said the performance is his greatest accomplishment thus far, his involvement in the L.A. music scene extends from ushering on weekends to teaching local students during the year.

Prior to the concert, Spiva was already familiar with the Los Angeles Chamber Orchestra. He has witnessed several of their concerts in between helping guests to their seats through his job with theater management services at Royce Hall.

Spiva began as an usher as soon as he arrived at UCLA in 2001, and has only stopped working for one year since. He initially applied because he wanted a job that related to the field he was studying: music. The young musician figured that by working at a concert hall, he could watch artists live.

One of his favorite performances by the Los Angeles Chamber Orchestra is “Azul,” a cello concert written by Osvaldo Golijov and performed by Yo-Yo Ma. Spiva said other events attracted stars like Oprah, Janet Jackson, Tom Hanks and the Clintons to Royce Hall. The peer-to-peer interaction with celebrities helps humanize them.

Spiva met John Williams, the composer of the original “Star Wars” trilogy, when a short documentary was filmed about Williams at Royce Hall. Before the interview began, Spiva had a chance to speak with the artist.

“I was telling him, ‘Yeah, I really enjoy your music, and I enjoyed the piece you wrote for the inauguration of Barack Obama in 2008,’” Spiva said. “(Williams) was like, ‘Thanks, yeah that was a really cold day when they had to play that music.’”

Spiva’s job in theater management taught him that he can enjoy the show, but he has to keep watch over the chaos that might occur outside. Thus Spiva said it will feel strange being off duty and listening to his own work.

“It’ll be a real challenge for me to sit down and relax and not be responsible for what’s going on outside the theater,” Spiva said.

Ernie Ybarra, a UCLA alumnus and the house manager of Royce Hall, said he will be responsible for keeping the auditorium under control during the Los Angeles Chamber Orchestra concert.

Ybarra believes Spiva has a keen musical sense culled from participating in and watching numerous performances.

“It’s good to have one of your own succeed,” Ybarra said. “I always tell the kids that if they ever come back and perform, it will be great to see them on stage performing for hundreds of people.”

While studying at UCLA, Spiva was inspired to compose by classes he took about world music, such as West African music and dance, North Indian tabla and music of the Balkans. Spiva wanted to hear the elements of these cultures – their rhythms and melodic lines – played in a new context with sounds pieced together in an unfamiliar way.

“I embarked on a journey to create what I was actually trying to look for in other people’s music,” Spiva said.

Spiva said translating rhythms to paper for the orchestral piece was challenging because different cultures have different approaches to learning music. West African music is typically taught via rote learning or ear training, but he said repeating sounds is as sophisticated as writing them down.

For “Prisms, Cycles, Leaps,” which took almost two years to compose, Spiva aimed to translate the rhythms into the notation of Western classical music.

The piece’s name is broken into the three parts. The word “prisms” references how an object can be perceived in new ways when tilted at an angle.

“(The piece is) the same object, so it’s the same melody, same rhythm, but because the way they’re felt is shifting with the beat, it kind of gives this interesting characteristic of perceiving,” Spiva said.

The “cycle” nomenclature comes from the repetition of certain instruments, meant to settle audience members before shifts occur so they can notice the changes. Sporadic leaps give the music a completely different feel, as well as the last word in the title, Spiva said. He described the big jumps not as gradual changes, but as right angle turns.

The structure of “Prisms, Cycles, Leaps” can be compared to an art gallery, Spiva said. While each piece of art has its own identity, they come together under an overall theme – in Spiva’s case, a theme of Ghanaian, North Indian and Balkan musical elements layered on top of one another.

His album, also titled “Prisms, Cycles, Leaps,” includes the orchestral piece and four others that revolve around the same concept of cycles. However, Spiva said the album varies in sound texture by incorporating different instrumentation with vocals, electronic or jazz solos.

A composer-in-residence program called “Music Alive: New Partnerships” enabled the premiere concert at Royce Hall by pairing Spiva with the Los Angeles Chamber Orchestra. Spiva said he entered a call for scores, and New Music USA awarded a residency to 12 composers in the United States.

Jeffrey Kahane, the music director and conductor of the Los Angeles Chamber Orchestra, said the program provides funding to composers and ensures an orchestra will perform one of the composer’s creations. Kahane said Spiva’s sample score impressed him.

For Kahane, “Prisms, Cycles, Leaps” is a joyous and visceral piece. He said the new piece will be juxtaposed well with the other two traditional pieces played at the concert, Franz Schubert’s Symphony No. 8 in B minor, D. 759 and Ludwig van Beethoven’s Violin Concerto in D major, Op. 61.

“(Spiva’s piece) really does bring the energy of African dance and Balkan folk rhythm into the concert hall,” Kahane said. “To do that in a way that is really authentic and doesn’t sound artificial is not an easy thing to do, and I think (Spiva) has done that very successfully.”

In addition to working as an usher and as a musician, Spiva is a music educator in Los Angeles.

“One of the things that I’m really passionate about is making sure that I share the information I have with other folks,” Spiva said. “I just love to spark the interest of young people.”

Spiva teaches music to elementary students in conjunction with the Los Angeles Philharmonic, as well as music theory and composition to teenagers through the Community Arts Partnership at CalArts.

Fourth-year music performance student Mark Gutierrez met Spiva as a bass player in the intermediate orchestra of the Santa Clarita Valley Youth Orchestra, which Spiva has conducted since 2012. Gutierrez said Spiva has since become a mentor to him – giving advice on Gutierrez’s own compositions and helping Gutierrez get hired as an usher at Royce Hall.

Gutierrez will take the day off to watch Spiva’s show with the Los Angeles Chamber Orchestra.

“(Spiva is) very articulate,” Gutierrez said. “(He) has a very clear idea of his intents both as a composer and as a person – what his idea is musically and more the message behind the music.”

Gutierrez respects Spiva’s focus on rhythm, which he said is not often taught in music education. He called Spiva a global citizen because of his interest in rich, multicultural traditions that other contemporary composers brush aside.

“One of the things that makes (Spiva) a great artist is that he has his eye on things going on all around world – musically, culturally (and) politically,” Gutierrez said.

Spiva hopes his music helps expose people to other cultures and create a microcosm for the rest of the world, encouraging understanding instead of anger and fear.

Spiva said the performance of “Prisms, Cycles, Leaps” is the furthest he has taken his musical career thus far and said Los Angeles is a great place for him to start.

“It couldn’t have happened in a better way,” Spiva said. “I get to go back to the place where I’ve worked for so many years and be on the stage rather than helping in the back.”