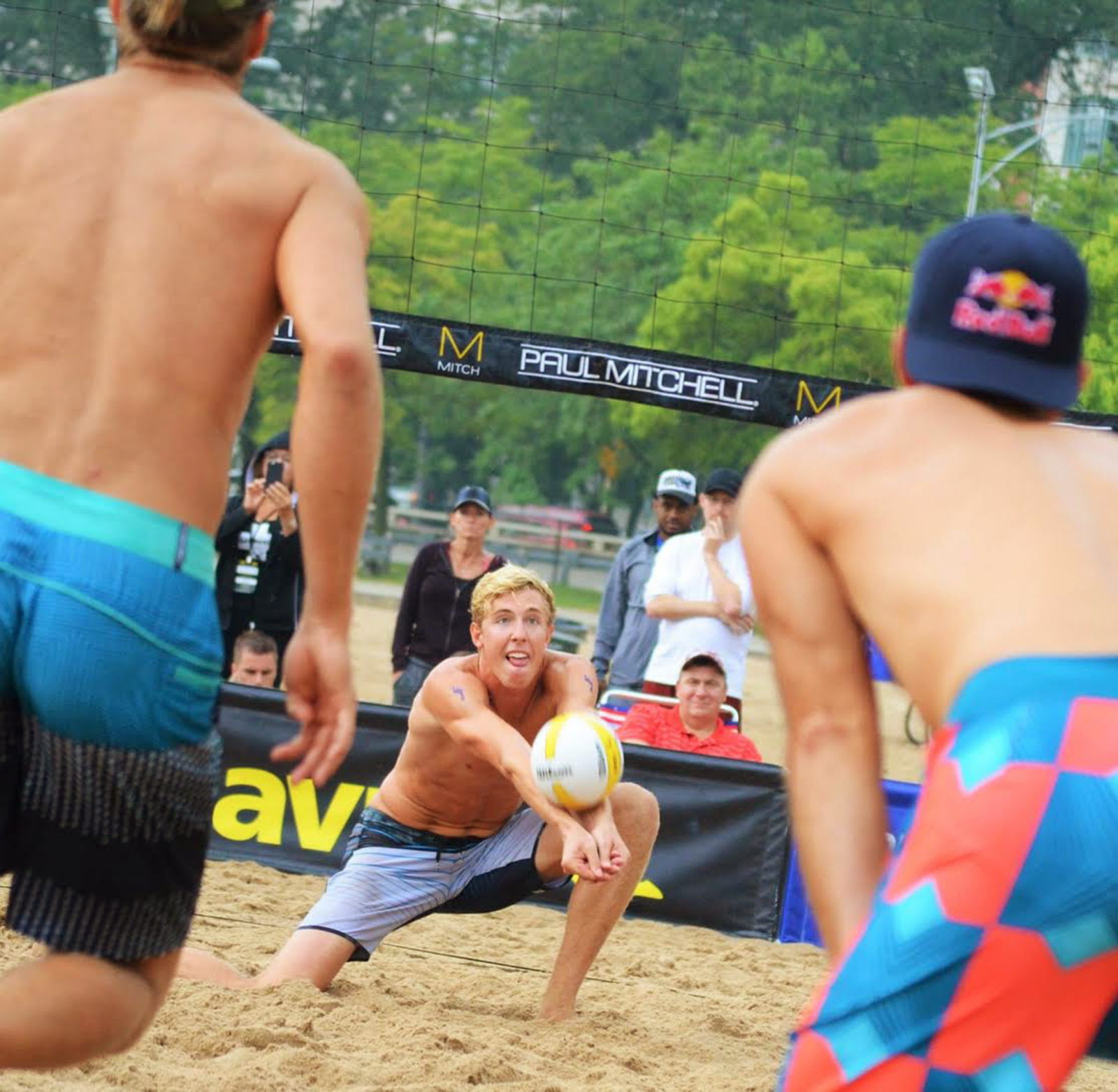 Robbie Page, a UCLA alum who played four years of NCAA volleyball, now practices 30 minutes away from his alma mater. After graduation, Page played overseas before deciding to come home to California to play beach volleyball. (Courtesy of Nick Chan)

Robbie Page wakes up before the sun most mornings and goes to work before the Southern California day becomes too hot.

For hours every morning, the Association of Volleyball Professionals player trains on the sand in Manhattan Beach, conditioning his 7-foot body to withstand the various physical tests of professional beach volleyball.

Page practices 30 minutes away from his alma mater, UCLA, where he played volleyball for four years after joining the team as the nation’s No. 1 recruit before the 2011 season. While his new home base is only a few freeway exits away, it took the outside hitter a long time to get there.

Page immediately headed overseas following his graduation in 2014, signing with Copra Piacenza in the Italian professional volleyball league. After paying his dues on the international indoor circuit for five months, he decided to come home to California – and the beach.

“I love the indoor game and I really enjoyed playing it. I would have loved to have a career in it but for me, it wasn’t the kind of lifestyle I wanted to live,” Page said. “It’s a grind. I have a lot of respect for the guys who play on the national team and play a lot of years overseas.”

Originally from Rochester, N.Y., Page said he fell in love with the West Coast after coming to UCLA. While he enjoyed traveling with his Italian team, spending months away from home in Europe took its toll.

After returning to Los Angeles, Page joined forces with AVP veteran Jason Lochhead and immediately transitioned from indoor to beach, playing with Lochhead for the first four tour stops. For the final three season competitions, Page teamed up with his current partner, Billy Allen. Together, the two have managed two fifth-place finishes, their season best.

“Robbie came on my radar and most of the players on the tour radar in the last year and the beginning of this year,” Allen said. “He would be hard not to notice, being 7 feet tall. With the way the game’s been going, everybody is trying to get the biggest blocker they can.”

Page’s rookie season ended Sept. 12 with a fifth-place finish at the Kingston AVP Championships at Huntington Beach. The former Bruin’s first season performance was good enough to be in the running for Newcomer of the Year honors. After leading the AVP in ace serves, Page could also be named Best Server.

“Usually in order for a blocker to be effective at the higher level on tour it takes five or six years, five or six seasons, but Robbie, with that skill set, was able to break in a little earlier than that,” Allen said.

He may be a few miles south in a much different competitive environment, but Page in many ways is continuing the path he began at UCLA. Because beach volleyball is a West Coast culture, Page’s pedigree was often doubted when it came to succeeding at volleyball, whether it was beach or indoor.

“Underdogs can make their dreams come true,” Page told the Daily Bruin in 2014. “I think even people out here think volleyball sucks (on the East Coast). Everyone looks down on it, like it doesn’t compare to West Coast volleyball.”

Page looks to move up in the AVP while also gaining points in international contests, working toward his goal of qualifying for the 2020 Olympics. While his sport has slightly changed, Page remains the same – a 7-foot force on the court with powerful ambitions to match.