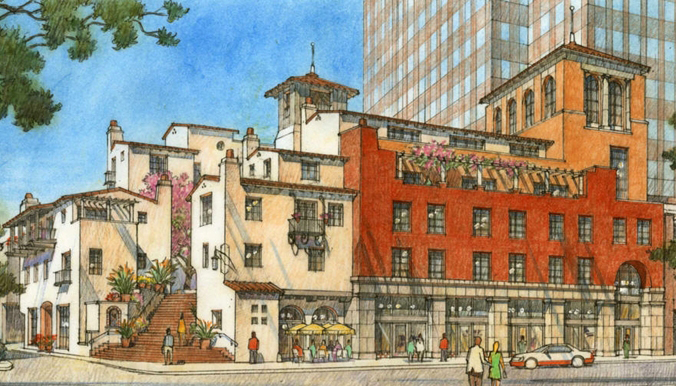 A new hotel being built in Westwood Village will accommodate long stays of 30 nights or more starting December. (Courtesy of Scott Gold)

A new hotel on the southeast side of Westwood Village aimed at long-term guests will become the only hotel in the area to require a 30-night minimum stay once it opens in December.

Indivest, the real estate developer that built the Center West building on Wilshire Boulevard, has been working on the project since 2008.

Scott Gold, general manager of the project, said the hotel will cater to international visitors, tourists and Westwood residents whose homes are being renovated.

Plaza La Reina, the 45-room boutique luxury hotel on Lindbrook Drive near Tiverton Avenue, will also house a restaurant and a bakery, Gold said. It will take the form of a Spanish style colonial building to match the architecture of Westwood Village, he added.

The hotel will include studio rooms, one-bedroom rooms and six specialty suites for guests who will work while they stay at the hotel, Gold said. He added that each room will include a kitchen.

Plaza La Reina staff have not chosen which restaurant and bakery will be on the ground level of the hotel, Gold said. Additionally, a four-level underground parking lot will be available for hotel guests and Westwood Village visitors.

Sandy Brown, president of the Holmby Westwood Property Owners Association, said she thinks the hotel will be a convenient place for homeowners to stay because a handful of the 1,100 houses in the area undergo renovations every year. Brown said those residents usually stay at the Beverly Hills Plaza Hotel, but that she thinks this hotel will be more home-stay oriented.

She added since people from outside of Westwood could also stay in the hotel, it could add more pedestrians to Westwood Village, making it more vibrant during nights and weekends.

Residents and visitors walking past the construction site said they think the project’s location isn’t ideal, because it is a long walk from other attractions in the Village or UCLA.

Erinn Cohen, a 23-year-old Westwood resident, said she thinks the new eateries may not be convenient for some students because the hotel is isolated from the rest of the life in the Village.

Ryan Jackson, a UCLA alumnus who works at Napa Village Grille in the Village, said there are already hotels along on Hilgard and Tiverton avenues and Westwood doesn’t need another. He thinks, however, that some students may want to try the new eateries once they open.

Indivest will also construct an apartment complex on Gayley Avenue and Wilshire Boulevard, a couple blocks west of Plaza La Reina. The company has not yet broken ground on that project.