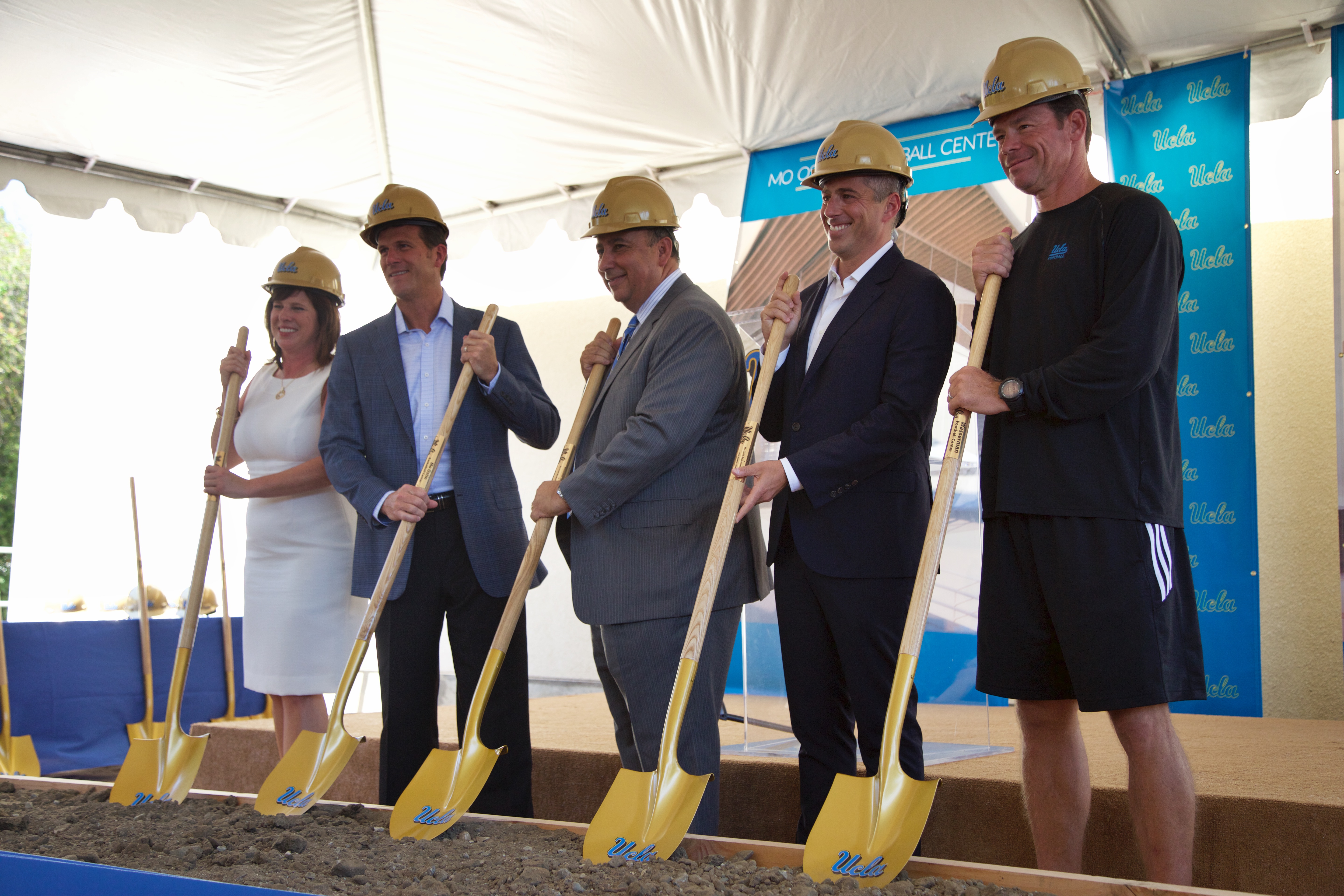 UCLA broke ground Thursday on two facilities that members of the athletic department vow will change the course of three prominent school sport programs: football and men’s and women’s basketball.

Fundraising campaigns for the The Mo Ostin Basketball Center and the Wasserman Football Center began less than two years ago as part of the campus-wide UCLA Centennial Campaign.

Casey Wasserman was on hand Thursday to wield the ceremonial shovel, making his mark on the land designated for the $65 million facility across from Spaulding Field. Wasserman graduated from UCLA in 1996 and went on to become a force in professional sports, building the Wasserman Media Group. His company represents many professional athletes, including UCLA basketball alumnus Russell Westbrook of the Oklahoma City Thunder.

“Success is a multifaceted endeavor,” Wasserman said, praising the work of coaches Cori Close, Steve Alford, and Jim Mora. “To be able to contribute more to that effort by creating facilities that allow someday to bring that culture permanently to the student athletes that will attend this university forever is something I couldn’t be more proud of.”

The football center will feature a strength and conditioning center with training rooms tailored specifically to football training, as well as a locker room, players’ lounge, equipment room and offices. Notable donors include UCLA football alum Troy Aikman, who donated $1 million to the project and Mora, who made an undisclosed financial commitment.

The football coach described the project as “the final piece of the puzzle” in terms of capturing a national championship.

Mo Ostin, a music executive who worked with talent ranging from Frank Sinatra to Green Day, contributed $10 million to the new basketball facility, which will be housed across from the Wasserman Center.

Close, who led women’s basketball to a Women’s National Invitation Title win last season, described the new training center as a “tipping point” for her program as well as for the men’s program.

Alford praised the new building’s 24/7 access and security system, joking that it would allow him to confirm whether his players were putting in the work they promised.

“I’m trying to figure out how we can have, even with the new building, unprecedented success in men’s basketball. I’m trying to figure out how that happens,” Alford said, referencing his program’s storied past in relation to Wasserman’s remarks. “I guess that means we gotta win 11 national titles and 89 games in a row. I have no idea how that’s going to happen, but if this building creates that, I’m all for it.”