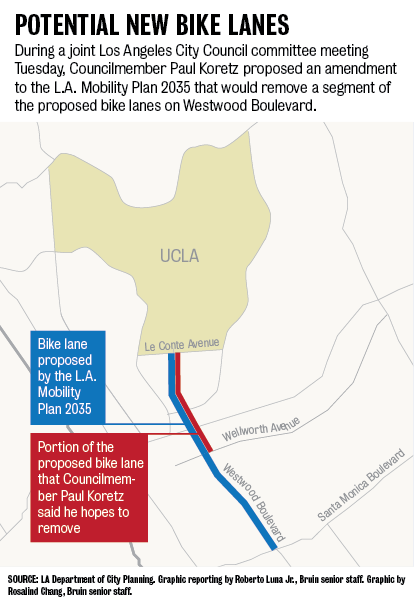 The original version of this article contained multiple errors. Karwaski stated thousands, not hundreds, of UCLA students, faculty and employees bike to campus every day. He also stated that a half mile between Wellworth Avenue and the main entrance of the campus has a collision rate, not of 10 collisions per mile, but 10 times the city's average. The committees will vote on amendments after, not before, the plan goes to the full city council for approval.

After listening to an hour of public comment, the city’s Planning and Land Use Management Committee and Transportation Committee members approved the L.A. Mobility Plan 2035 but postponed voting on amendments, including another intended to establish equity in future street planning, to give members more time to evaluate people’s comments and the proposed changes.

The committees will meet again to vote on amendments to the mobility plan before it goes to the full city council for approval.

In addition to creating a 180 mile network of bike lanes throughout Los Angeles, the plan aims to eliminate traffic-related deaths by 2035 and increase transit frequency, so buses arrive within 15 minutes of each other at each stop.

The plan would shift policy toward prioritizing safety and making Los Angeles friendlier for alternative forms of transportation like light rails and more pedestrian-friendly sidewalks, she added.

He added he thinks the street was blindly selected to have bike lanes and that accidents on Westwood Boulevard occur because the street is not suited for cyclists.

Herbie Huff, a research associate at the UCLA Lewis Center for Regional Policy Studies, previously worked on a bike lane planner and said she thinks Koretz and Westwood residents haven’t presented an evidence-based argument that clearly outlines how bike lanes on Westwood Boulevard would be unsafe.

Huff said she thinks Westwood Boulevard is the optimal street to place bike lanes because bike lanes north of Le Conte Avenue and south of Wellworth Avenue would provide cyclists with good connectivity from Santa Monica to UCLA.

She added she thinks bike lanes wouldn’t affect emergency vehicles because vehicles would be able to pull over or use bike lanes in the event of emergencies.

Councilmember Mike Bonin said choosing an alternative street would require the entire plan to be revised based on further research, because it was created for a comprehensive network of streets.

UCLA students and representatives argued against Koretz’s amendment at the meeting, calling for the plan to pass in its current form. They said they think protected bike lanes on Westwood Boulevard would help ensure the safety of more than 3,000 cyclists who commute daily to UCLA.

Daniella Ward, a graduate student in urban planning, gave the committees a stack of postcards signed by students who support the proposed bike lanes.

Dave Karwaski, senior associate director of UCLA Transportation, said he also thinks the council should approve the plan in its current form, citing the safety of the hundreds of UCLA students, faculty members and employees who bike to campus through Westwood Boulevard every day. Karwaski previously mentioned that about 10 Westwood Boulevard collisions per mile per year involve a cyclist or a pedestrian.

Nurit Katz, UCLA’s chief sustainability officer, said she thinks the bike lanes should stay in the plan to protect cyclists who use Westwood Boulevard, but the council should initiate a follow-up study to determine whether safety concerns outweigh the potential benefits.

Members of the Westwood community who opposed the bike lanes argued they would be ineffective in ensuring cyclists’ safety and endanger those using vehicle lanes.

Jerry Brown, president of the Westwood Neighborhood Council, said he doesn’t support the bike lanes because the plan calls for shrinking vehicle lanes on Westwood Boulevard to accommodate the bike lanes, which he thinks will make the street more hazardous.

However, Huff said research found that narrower lanes are actually safer because people can feel the proximity of other cars and other people and instinctively slow down.

Steve Sann, chair of the Westwood Community Council, said he thinks Gayley Avenue, Veteran Avenue and Sepulveda Boulevard would be safer streets to have bike lanes on because he thinks they have less vehicle traffic than Westwood Boulevard.

He added he thinks adding bike lanes to Westwood Boulevard is easier than in the other streets because it is wider and wouldn’t require removing any traffic lanes.

Snyder added Veteran Avenue and Sepulveda Boulevard do not directly connect to the Village or to UCLA, making them inconvenient options for cyclists.

Of the alternatives, he said he thinks Gayley Avenue is the most viable option because it could serve cyclists coming to Westwood from the west.

None of the UCLA students or representatives who gave public comment opposed the creation of additional bike lanes.

Proposed amendments will pass if the two committees vote to approve it at their next joint meeting. The city council has until Aug. 21 to vote on the plan.