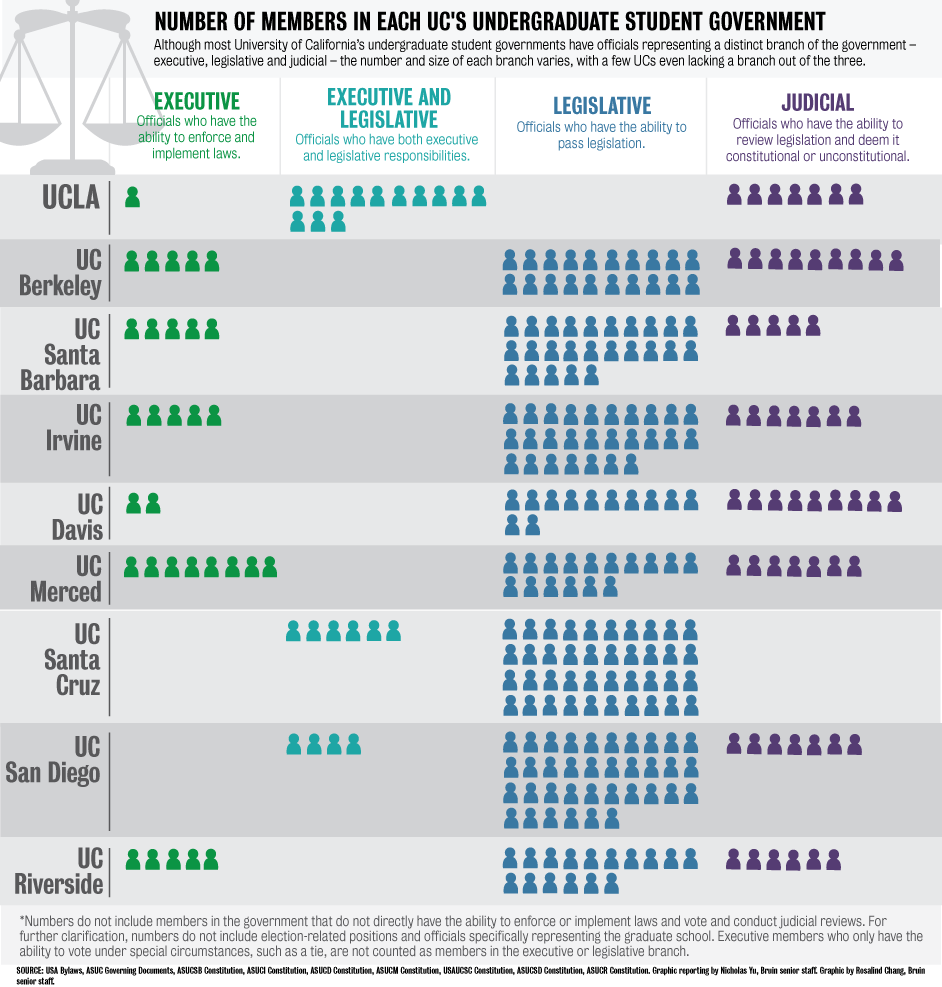 Undergraduate student governments in the University of California system range in size and structure. While UCLA is the only UC campus that organizes its student government in commissions with specialized responsibilities, students on other campuses govern themselves based on other forms of representation.

The 14 UCLA undergraduate student leaders each have specific duties to fulfill as outlined in the Undergraduate Students Association Council’s bylaws, the rules that define the structure of UCLA’s student government. Each elected leader, or councilmember, controls an office or commission. He or she hires and directs staff members who assist in fulfilling those duties.

In the 1950s, the Student Legislative Council, the name of the undergraduate student government at that time, was restructured into a representative-based system, said Rick Tuttle, a lecturer at the UCLA Luskin School of Public Affairs and a previous administrative representative for USAC. Positions on the council included representatives from each class and a women’s representative, Tuttle added.

In 1965, a group of students created the Community Service Commission with the sole purpose of providing and coordinating service opportunities for students, Tuttle said.

With the advent of each new commission, the bylaws had to be updated to define the duties of each commission and commissioner. For example, the Campus Events Commission’s mission statement is to introduce “the freshest fare in film, music and speakers into the UCLA community at an affordable cost.” In May, the CEC brought in Brandon McCartney, better known as Lil B, to speak at UCLA.

While UCLA is the only UC campus to have 13 officials with both legislative and executive responsibilities, the majority of UC campuses base their government on the three-branch system.

At UC Irvine, the executive and legislative branches work to pass, draft and enact legislation, while the judicial branch is responsible for making sure the legislation is in accordance with the Associated Students UCI Constitution, said ASUCI Administrative Affairs Vice President Alexander Fung.

The five executive officers each have his or her own office in charge of fulfilling specific duties as outlined in the bylaws, similar in function to the councilmembers at UCLA, Fung said. Yet, UCI is different in that each office is in charge of several commissions focused on addressing specific issues, such as the campus climate, Fung said.

The Legislative Council, the name of the legislative branch within ASUCI, currently has 27 seats with the average seat equivalent to 2,000 voices and representing a different academic school, said ASUCI President Parshan Khosravi. The remaining seats are filled by representatives from clubs and organizations, Khosravi added.

After a recent fall voter turnout of 1 percent, ASUCI is drafting a referendum that will make the process for electing councilmembers more comprehensive, Fung added.

Straying from the typical three-branch structure, the student government at UC Santa Cruz only consists of a legislative and executive branch.

The SUA was created to represent the voice of the student body and only needed legislative and executive officials to achieve that goal, said SUA Vice President of Academic Affairs Seamus Howard in an email statement.

“It’s time to start a movement toward a judicial branch,” Howard said in an email statement. “The check on the president’s power is the SUA body (legislators), but who checks the power of the SUA body?”

“We’ve based our newly created government structure on what most UCs do,” Hashemian said. “Before we revised our constitution, the jurisdiction of each branch was unclear and our legislative branch was too powerful.”

However, former USAC Academic Affairs Commissioner Allyson Bach said she thinks the commission system guides councilmembers in prioritizing platforms and creating plans of action which are in line with the councilmember’s duties.

Despite the differences in each UC’s student government structure, all aim toward representing the student body and making a difference on campus, Fung said.

“It might be that UCLA’s Academic Affairs Commission is elected by the student body and UCI’s is elected by the executive officials, but beside the variation in structure, we try our best to do our duties,” Fung added.