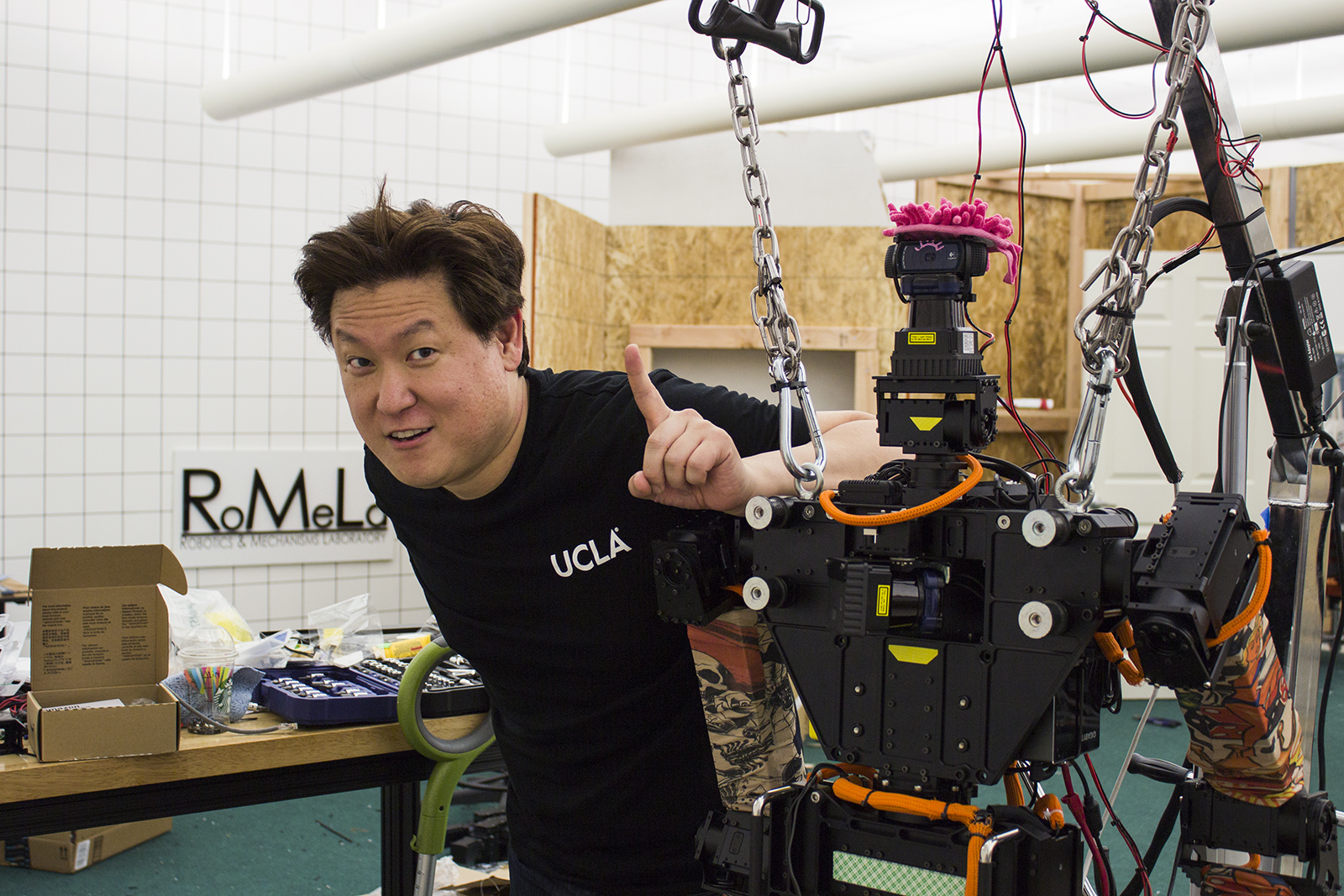 Professor Dennis Hong has led the Robotics and Mechanisms Laboratory at UCLA since 2007, creating robots that benefit society. The U.S. Navy awarded Hong a $1.6 million grant to help fund the creation of a disaster-relief robot. (Alyssa Dorn/Daily Bruin)

Four years ago, Mark Riccobono strapped himself into a specialized vehicle and drove alone for the first time at the Daytona International Speedway in Florida.

“Personally, the most empowering (moment) was the first time I got to drive the car independently,” said Riccobono, who started going blind when he was 5 years old. “Up until that point, driving was always presumed to require vision – and we were changing that.”

Dennis Hong, then-professor at Virginia Tech, led the student team that built the car for the Blind Driver Challenge, a project by the National Federation of the Blind aiming to create technology that would enable blind people to drive safely and independently.

“We develop technology that will give people happiness,” Hong said. “We don’t do work just because we have research funding; we don’t do work because it’s just fun. We only do work when it can actually have an impact on society.”

Last year, Hong moved his lab from Virginia Tech to UCLA. The maze of mechanical debris, cluttered worktables and floor-to-ceiling whiteboards in the lab surround a demo area of robots suspended from metal frames.

THOR-RD, whose original model remains at Virginia Tech, is one of Hong’s latest models aimed at helping with disaster relief.

“Since I was young, I’ve wanted to have a butler robot at home,” Hong said. “(But) there are more important tasks that we need to solve – dull, dirty and dangerous tasks that people can’t or shouldn’t do.”

On June 5 and 6, a joint team of UCLA and University of Pennsylvania students competed in the finals of the challenge, which required robots to drive, traverse uneven terrain and operate tools within an obstacle course, according to DARPA’s website. THOR-RD collapsed and broke during the challenge, earning the team 13th place. But Hong doesn’t consider the DARPA challenge a competition; every team fought to build technology for humanity, he said.

“If your robot doesn’t fall and break, you don’t learn anything,” he said.

Hong’s passion for robots began when he saw “Star Wars” as a child. While the robot R2-D2 influenced his early studies of robot movement, the talking android C-3PO inspired him to engineer robots for human service.

For example, he built the robot Culinary Assistant Robotic Limb to show he could create robots that help the physically disabled in cooking. In 2013, he competed on one episode of the cooking show “MasterChef” with CARL, showing that the robot could chop carrots and measure rice as his sous chef.

Today, Hong teaches 12 graduate students and about 15 undergraduate students through RoMeLa. Although many of his robots are at Virginia Tech, Hong is undertaking new projects at UCLA, such as the six-legged robot SHELoB.

Sandzimier said he thinks Hong is a supportive and personable professor.

“(Hong) trusts in your ability to work and do a nice job,” Sandzimier said as he drilled brackets for SHELoB’s main frame. “But he’s always willing to step in, help and provide feedback.”

Since the DARPA challenge, Hong has focused on building Anthropomorphic Robotic Platform for Intuitive Operation and Service, a disaster-relief robot that will move with springy materials modeled after human muscle. The U.S. Navy funded the four-year project with $1.6 million.

But above all, Hong is still proudest of his students.

“I want to produce students who will be leaders in their field, and future engineers who will lead the world,” he said. “I want to be remembered as a great educator.”