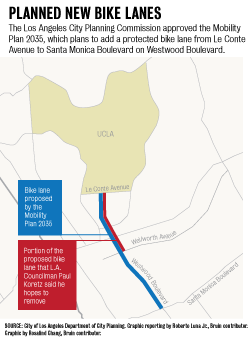 L.A. City Councilman Paul Koretz said he wants to remove the lane from the Mobility Plan 2035 because of safety and traffic concerns. The Los Angeles City Planning Commission unanimously approved the plan May 28.

The mobility plan is intended to be a citywide transportation guide, but the city’s Planning and Land Use Management Committee, Transportation Committee and the L.A. City Council must approve it before commuters can expect to see changes.

In an email statement, Koretz said he thinks bike lanes along this section of Westwood Boulevard could compromise traffic safety by eliminating turn lanes and parking spots, which could create delays in emergency vehicle response times.

“For the sake of the quality of life of that part of Westwood Village, and the safety of those who travel to and through it, that section should be removed from the plan,” Koretz said in the statement.

David Karwaski, a senior associate director for UCLA Transportation, said UCLA officials want the city to conduct an engineering study of bike lanes’ viability in Westwood before determining whether Westwood Boulevard is too dangerous for bike lanes.

When Karl Spires bikes down Westwood Boulevard, he said he is either forced to integrate into regular traffic or navigate through the narrow space in existing unprotected bike lanes.

Karwaski said he thinks adding bike lanes would lead to a decrease in traffic over time as biking becomes a more viable option.

Koretz said he is working to establishing safer and less disruptive bike routes for the 3,100 bicyclists who commute to UCLA every day.

The Planning and Land Use Management Committee and Transportation Committee will meet to vote on the mobility plan later this month.