Chloe Lew: LA City Council must follow through on promise to repair sidewalks 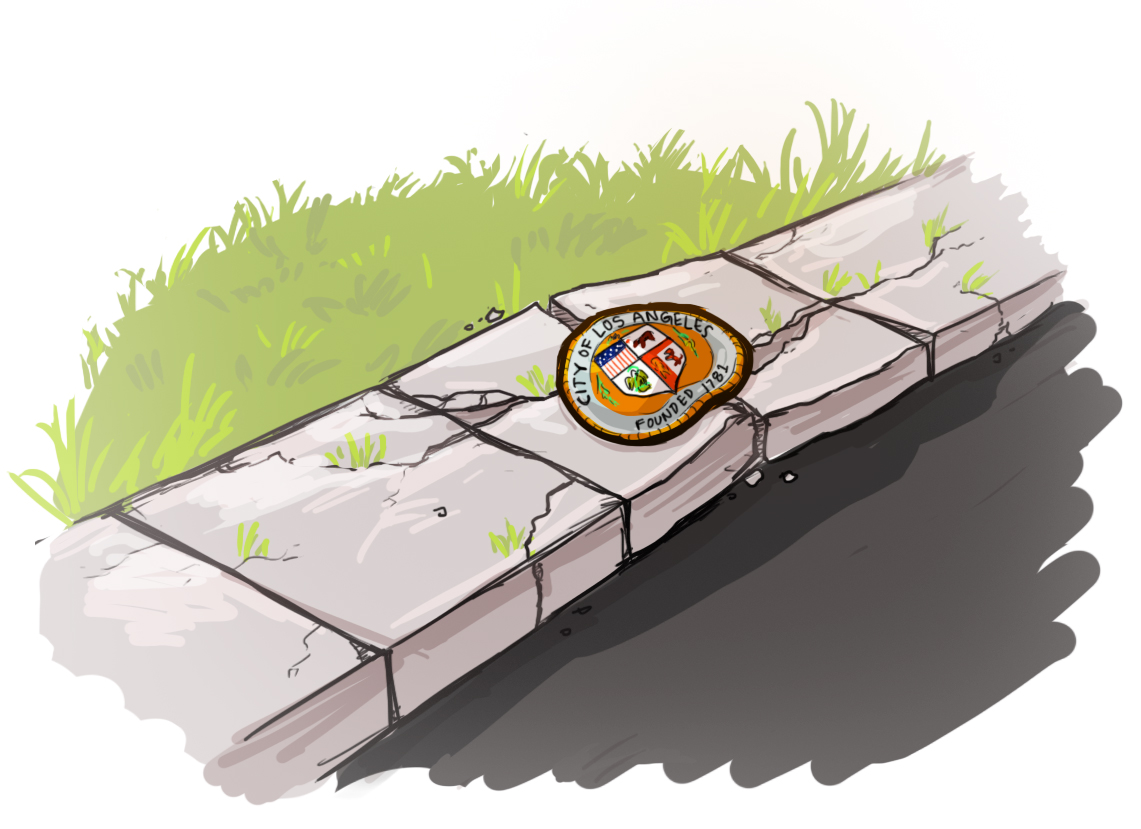 Our city’s sidewalks are crumbling, and with them, my faith in the Los Angeles City Council.

More than 40 years after it said it would repair our buckled, tree-damaged sidewalks, and almost two months after it agreed in an Americans with Disabilities Act case to spend $1.4 billion to fix them, the city is now recommending commercial property owners repair their sidewalks by themselves. What’s more, the proposal recommends shifting the responsibility for future repairs back to single-family residential owners after an initial fix by the city.

I’d like to start this blog post with a disclaimer: Sometimes I think the only legacy I’ll leave at the Daily Bruin is my long-time tirade against the perilous state of our city’s broken sidewalks.

So you have to understand when I say that the idea of the city failing to fully straighten our sidewalk problem as it has been promising to do for four decades feels like a betrayal.

Before I get into exactly why that is, here is a little context: While state law declares property owners are responsible for their adjacent sidewalks, our city exempted property owners from doing so in 1973 and committed themselves to take care of any damages caused by ficus trees planted half a century ago.

But this recent proposal only offers a one-time fix before shifting the responsibility of any future damages back to property owners. And if the city does not remove the trees that are causing these damages, sidewalks will need to be repaired again later on.

It might be generations until the sidewalks need to be fixed again, but when that time comes, it could cost thousands of dollars per residency, and it could be because of a problem we already very well know exists – frankly, money doesn’t grow on these relentlessly destructive trees.

Even in the initial fix, the city council cannot pick and choose who to help out. If the city takes care of its residents, it must also take care of its business owners.

When the City Council committees meet to discuss the proposals next week, they should recommit to long-term responsibility for any sidewalk damage caused by trees, rather than offer this temporary fix and neglect any future damage caused by these same trees. The City Council should also reconsider covering the repairs of commercial property owners for the sake of our city’s economy. For business owners in Westwood especially, where businesses come and go often, putting this additional burden on owners could be just one more reason for them to settle down elsewhere.

After years of avoiding the issue – declining to spend $10 million on an inventory project, abandoning the “Save Our Streets” sales tax initiative and generally letting the backlog of sidewalk repair pile up – it’s time for the city to own up to its promise, not time to start backing down.

In the meantime, I’m running out of clever puns to make light of this issue – partly because the argument for immediate and city-sponsored sidewalk repair is so obvious it should not need to be repeated, and partly because this is a serious issue for so many elderly and disabled pedestrians, as well as bicyclists, skateboarders and even your average students on their late-night walks home.

With better groundwork will come better standards for living. Angelenos might walk or bike down the street instead of drive. Our toes would be safe from being stubbed on uplifted chunks of concrete. We could dine on restaurant sidewalks.

Until the City Council shows Angelenos that it is doing tangible work to put repairmen on the street and not just empty proposals on the table, our city won’t be any closer to navigating us out of this concrete jungle that nightmares are made of.