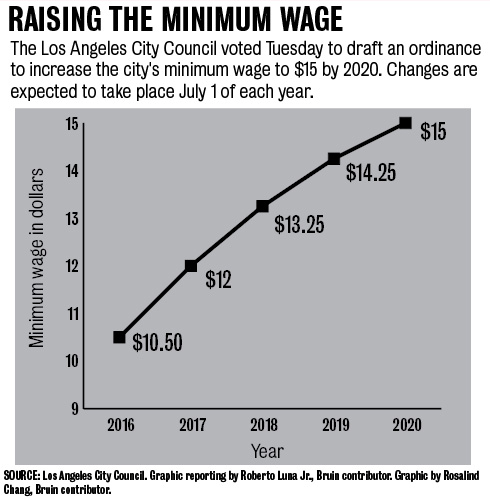 The Los Angeles City Council voted Tuesday to raise the city’s minimum wage to $15 an hour by 2020.

As a result of the 14-1 vote, City Attorney Mike Feuer will write an ordinance for the proposal and submit it to the city council later this year. The first wage increase would mandate a minimum wage of $10.50 an hour by July 2016, with additional increases happening annually in July for the following four years until it reaches $15 an hour in July 2020.

The proposal initially sparked criticism from business leaders because many said they think it would decrease jobs, while activists pushed for a steeper hike.

Businesses with fewer than 25 workers would have an additional year to fulfill the plan’s requirements.

UCLA and the Associated Students UCLA, both of which hire UCLA students at hourly wages, could not be immediately reached for comment.

Chris Tilly, director of the UCLA Institute for Research on Labor and Employment, said he thinks this change will be hard for small businesses to adapt to, but he doesn’t think it would affect Westwood businesses as much because they have a clientele of UCLA students.

“Some businesses may be hurt and some may have to scale back,” he said.