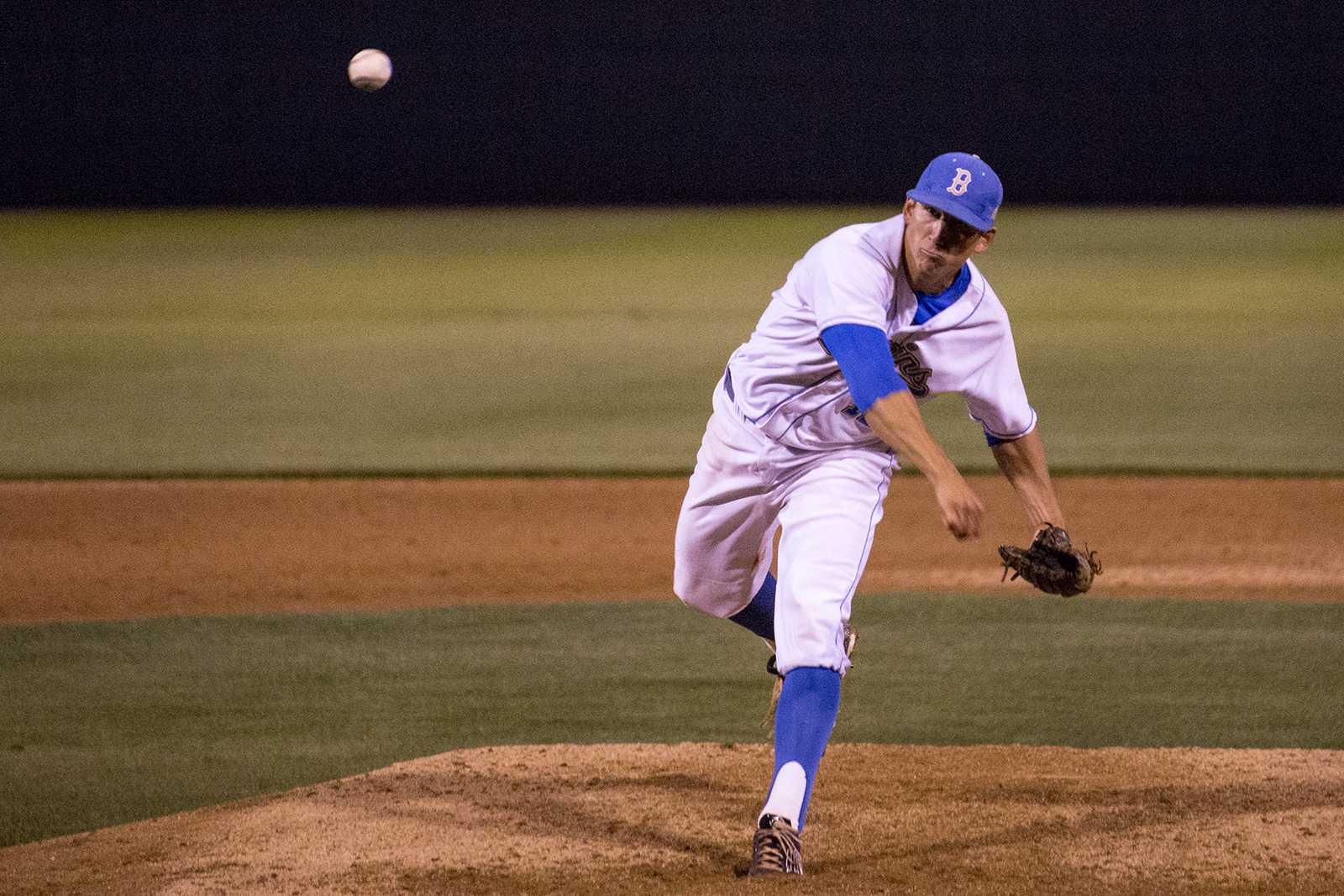 By Matt Joye and Conor Cusack

Before the Bruins’ record-setting game on Friday night, senior closer David Berg met up with junior pitcher James Kaprielian, who was preparing for his start against Arizona.

“Hey, you go eight, I go one,” Berg said to Kaprielian.

Kaprielian said, “Alright, you got me. Let’s do it.”

A bit over three hours later, the two pitchers took that goal to another level.

Kaprielian pitched nine innings without allowing a hit or a run – the first time that feat had ever been accomplished since UCLA baseball started recording official stats in 1974.

With the game still tied 0-0 after nine innings, Berg came in for the top of the 10th and kept the no-hitter alive.

“It felt a little different, you throw a no-hitter and no one celebrates, the score is 0-0,” said coach John Savage.

The Bruins could finally celebrate in the bottom of the 10th, when redshirt junior shortstop Kevin Kramer plated the game’s first run on a walk-off sacrifice fly. Kaprielian jumped over the dugout railing and ran onto the field, where he was mobbed by his teammates.

But Kaprielian said he made sure to meet individually with one person who will always sit alongside him in the record books.

“There’s no one like David Berg in the nation,” Kaprielian said. “So it’s fun to share a no hitter with that kid.”

By the time the weekend was over, the entire UCLA team had something else to share: a Pac-12 title. The No. 2 Bruins (40-12, 21-6 Pac-12) swept the Wildcats (28-23,12-18) , and officially earned their conference crown when the crosstown-rival USC Trojans lost to the Cal Bears on Sunday evening.

Kaprielian’s nine innings of no-hit ball were not a surprise to some of his teammates.

“He has the stuff to do it, he has the mindset to do it,” Kramer said. “So I’m not surprised. I don’t think anyone’s surprised that knows James (and) that has seen him pitch.”

Kaprielian had shown flashes of no-hit stuff before. On April 16 against Cal, he struck out 10 batters through five innings.

“That stuff (against Cal) was every bit of (Friday’s) stuff,” Savage said. “That was dominating stuff.”

Kaprielian said he’s grown since that Cal start. Before the Gonzaga series in early May, he said he had a problem of getting too fine with his pitches sometimes, trying to make the perfect pitch. He said on Friday night he did a better job of pitching to contact when necessary, even though he did tie a season high with 11 strikeouts.

“It happens to be that most of the time when you make small missed pitches and you’re pitching to a certain area and you’re commanding and controlling it well, (then) they hit it to one of your guys,” Kaprielian said. “I think that was kind of an example of what was happening (Friday). … I just had small missed pitches and then they hit it to our guys.”

As it turned out, by not trying to pitch as perfect, Kaprielian pitched as perfectly as anyone in school history over a nine-inning span. It also happened to be against the best hitting team in the Pac-12.

Before the team took the field, the seniors players were presented with framed jerseys and walked on to the field with their parents.

“I was definitely a little flustered by it because you know it’s your last time playing at home for the regular season,” said senior third baseman Chris Keck. “But it was definitely a good time to have my parents there and looking back on all the memories we’ve made here at (Jackie Robinson Stadium), it’s for a lifetime.”

Berg, who recorded the save Sunday, echoed Keck’s reflective perspective, but said the pregame ceremonies did not elicit any nostalgia because there’s lots of season left. The senior closer said his favorite part was seeing the tribute video and looking back on his and his teammates’ journey from freshman year to today.

Savage said it was an emotional day seeing players like Berg and senior pitcher Grant Watson, who were walk-ons three years ago, gather on the foul line with their parents. He said they have fostered a culture of trust, loyalty and commitment that the program has thrived under for the past four years.

“I just think it’s a credit to their character and credit to our assistant coaches and a lot of (other) people,” Savage said. “I’m very proud of those guys’ accomplishments as much off the field as I am on the field.”