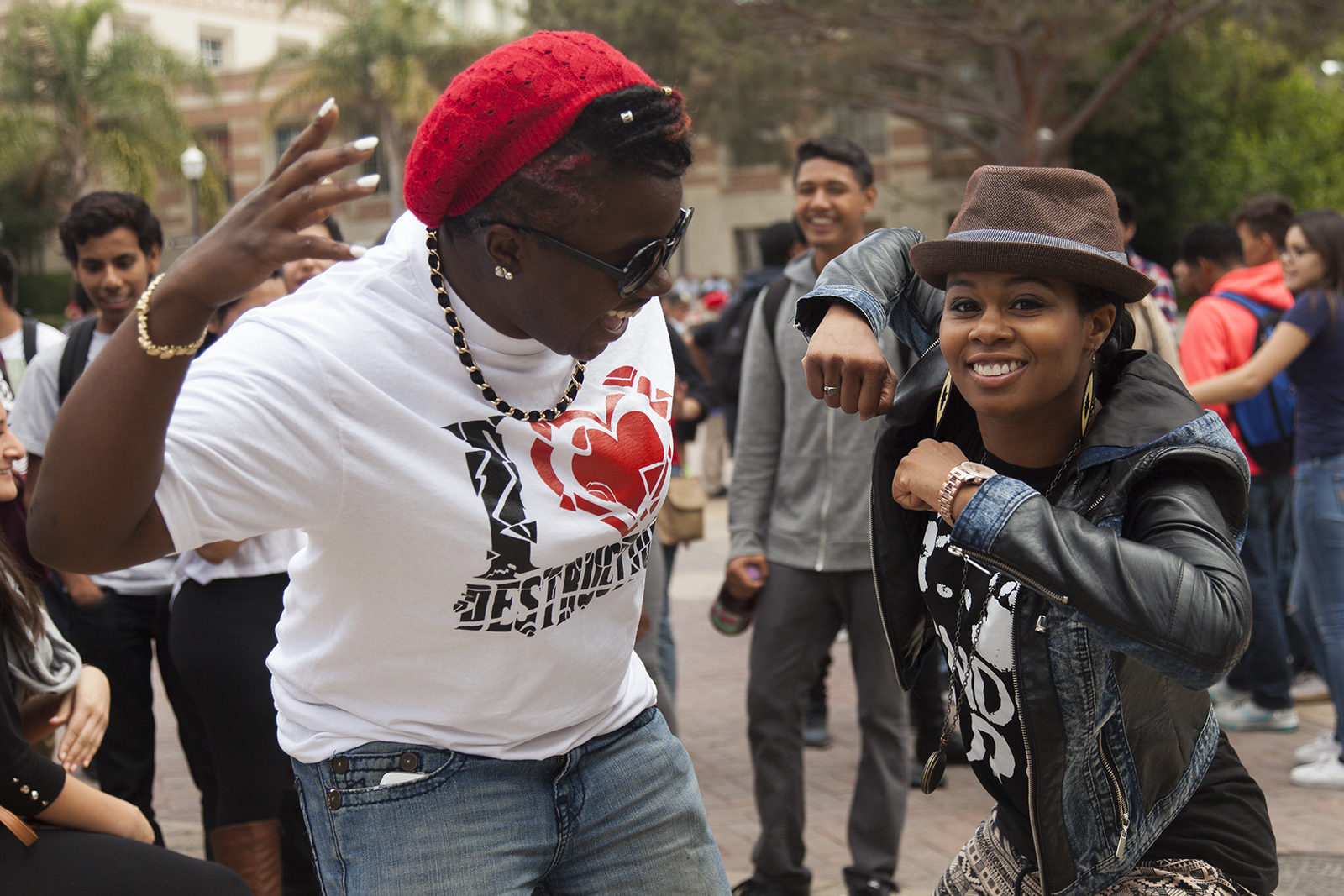 Shamell Bell, a UCLA graduate student in culture and performance, and Deidra “Krucial” Cooper demonstrated some of the street dance moves they incorporate into their protests. (Hannah Ye/Daily Bruin)

She stood in front of the downtown Los Angeles police station for hours, repeating movements and instructions before a small group while music blared from a speaker. Shamell Bell was teaching street dancing to protesters and passersby as part of an 18-day protest following the release of Ezell Ford’s autopsy report on Dec. 29.

“We all danced as a form of liberation,” Bell said. “Whatever talent you have, you can use it to be a part of social action.”

The graduate student in culture and performance uses her background as a dancer in her work as an organizer for the Black Lives Matter movement by incorporating dance into protests and events. Black Lives Matter started after the acquittal of George Zimmerman in 2013 for the shooting death of unarmed black teenager Trayvon Martin.

Ford, a mentally ill black man, was shot and killed by police in August. Massive protests have taken place across the U.S., including in Baltimore and Ferguson, Mo., in response to the killings of black people by police.

Bell said her role as an organizer and one of the founders of Black Lives Matter in Los Angeles began with her undergraduate education at USC.

She said she took a class with Robin Kelley, who currently teaches history at UCLA, on race and class in Los Angeles. She said Kelley helped her to realize that her papers on displacement and gentrification could have an impact beyond the academic sphere.

“At the end of class we would have these A papers and I was wondering, why don’t we do a town hall?” Bell said. “I wanted to be able to do more than theorize about issues.”

Melina Abdullah, a professor of Pan-African studies at California State University, Los Angeles, met Bell when she was a student at USC.

“Two days into demonstrations with Trayvon Martin, we were convened by Patrisse to think about how we could become a movement, not a moment,” Abdullah said.

Bell said her background as a street dancer and krumper has become integral to her activism. Krumping is a highly energetic form of street dance that was popularized in the 1990s and used by black youth as an alternative to gang life. Bell was part of the krump movement when she was younger and was in a documentary about krumping called “Rize.”

“If someone is at the Grove shopping and they see a flash mob for black lives, then there is an opportunity for a dialogue about what we are fighting for,” Bell said. “Artistic political engagements are key in this current movement.”

Abdullah said she doesn’t think the movement could be sustained without the artistic element of dance, music, poetry and visual art.

“Art allows the movement to be one that speaks to folks on a soul level,” Abdullah said. “This work can get really heavy and the art allows us to be nourished by the movement rather than depleted by it.”

“We wanted to help groups link up so we are not reinventing the wheel every time we want to do something,” Vestal said.

Vestal said Bell’s contributions to the movement go beyond her skills as a dancer and an organizer.

“It is exhausting – emotionally and mentally challenging – to keep doing this in the midst of more murders,” Vestal said. “She checks in on people, not just on organizational matters, but to be sure everyone is taking care of themselves and that they are doing well psychologically.”

“UCLA has intellectual students who are angry but are not doing anything,” Bell said. “I wanted to build a coalition of people who are going to be called to action.”

The coalition will be hosting a meetup Monday at 1 p.m. in front of the Bruin Bear to discuss campuswide actions connected to a Black Lives Matter talk hosted by Kelley last week.