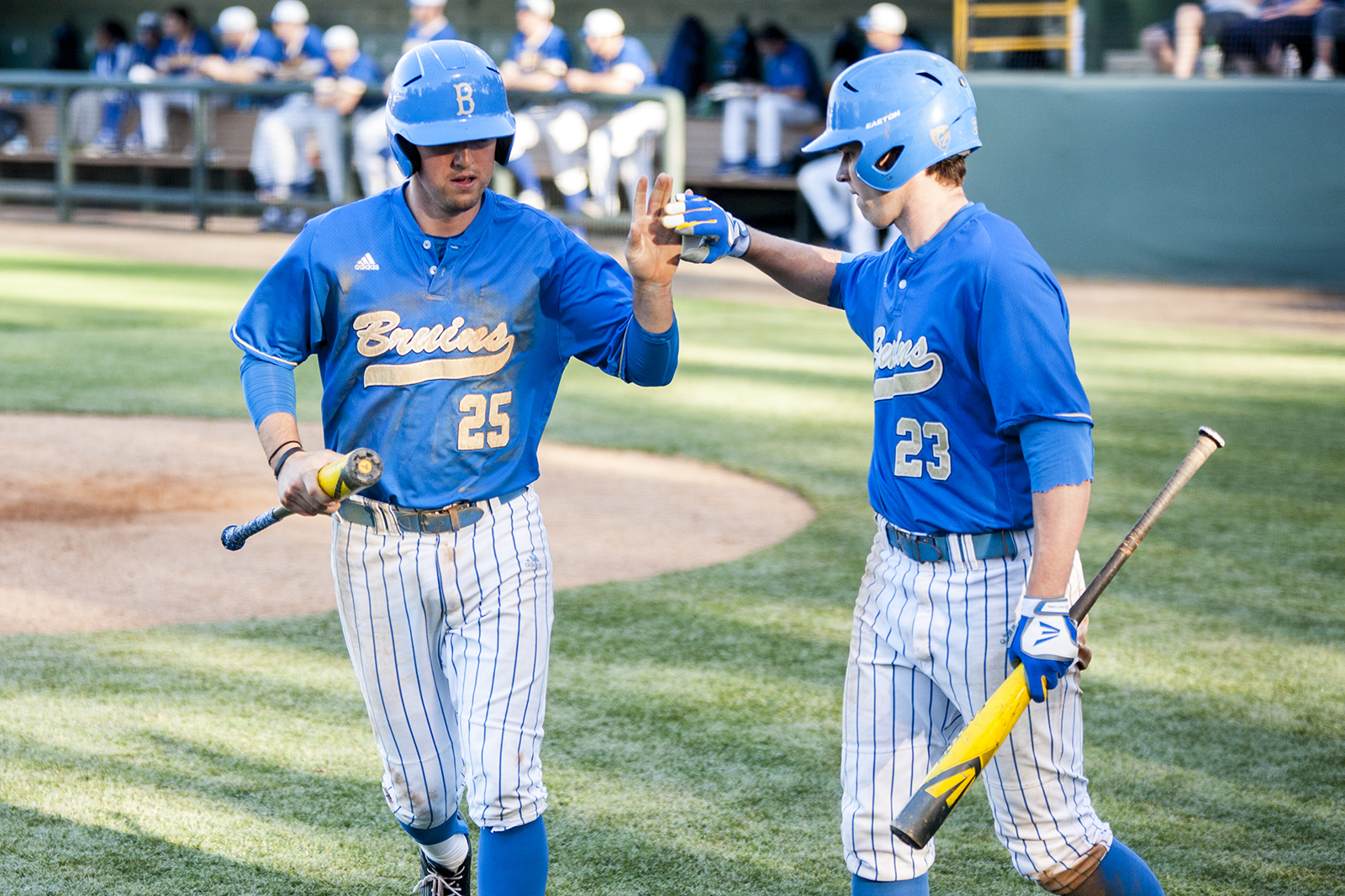 Senior third baseman Chris Keck (left) high-fives sophomore outfielder Brett Stephens after scoring a run in the eighth inning of UCLA’s game on Feb. 15. The Bruins have averaged their most runs in the eighth inning. (Aubrey Yeo/Daily Bruin senior staff)

It’s a saying that UCLA baseball players have emphasized all year long: “Outlast your opponent.”

The Bruins have done exactly that lately, saving their best for the final innings of games. Heading into a three-game weekend series against Arizona (28-20, 12-15 Pac-12), No. 2 UCLA has won two of its last three games in come-from-behind fashion.

In addition to the Bruins improving their offense late in games, their pitching staff has seen a spike in efficiency during the late innings as well.

“We try to emphasize winning those last three innings,” Savage said. “And you throw in a really good bullpen – that helps, with Forbes and Dyer, their ability to strike people out. And then you turn the ball over to Berg.”

Berg enters his final home series as a Bruin as one of the strongest pitchers in college baseball. He ranks No. 3 in the country in ERA and is only six saves away from tying the NCAA all-time career record of 53.

On the contrary, the Wildcats’ bullpen has proven to be one of their main weaknesses this year.

Arizona’s leader in saves – sophomore Bobby Dalbec – enters this weekend’s series with six losses compared to five saves. As a matter of fact, Dalbec isn’t even a full-time pitcher, as he currently serves as Arizona’s top home-run hitter with 14 on the year, tied for No. 12 in the country.

Outside of Dalbec, the Wildcats’ leading reliever in terms of innings pitched – junior Nathan Bannister – has a 4.20 ERA and a .293 batting average against.

Hence, Arizona’s susceptible bullpen might play right into the hands of UCLA, which has shown a proclivity for peaking over the final four innings.

“Arizona’s gonna be very competitive, and we need to be ready to play this weekend,” Savage said.

But if the Bruins aren’t ready to play at the start, they will look to live out their motto and outlast their opponent once again.