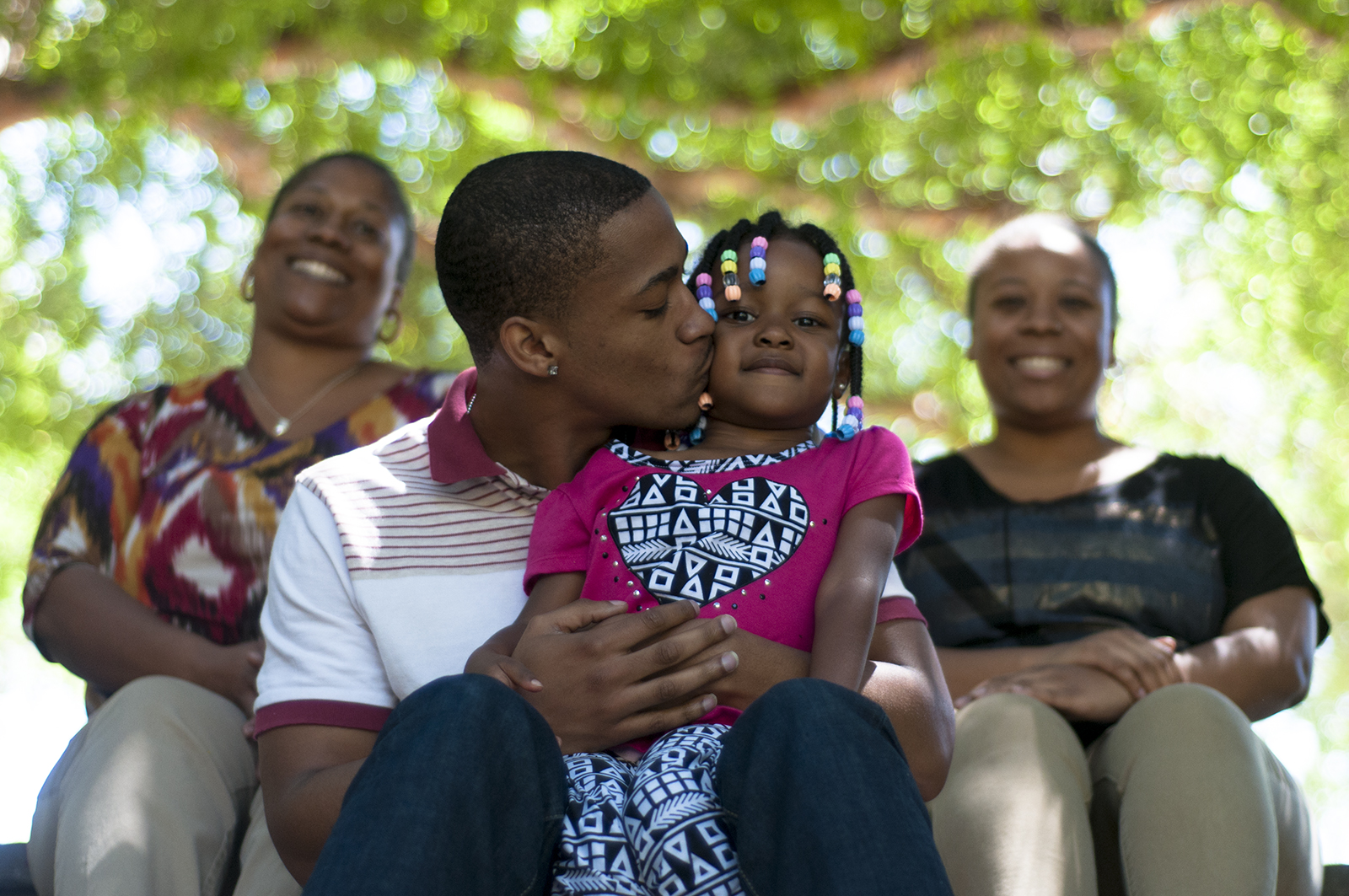 Michael Gaulden, surrounded by his family, is a UCLA alumnus and spoken-word artist who launched an online campaign on YouCaring.com to help raise awareness and money for homeless individuals. (Felicia Ramirez/Daily Bruin senior staff)

Michael Gaulden first learned what it was like to be homeless when he was 7 years old, doing his homework under streetlights at night and living in homeless shelters with his mother and sister.

“I was looked at as being less than a person,” Gaulden said. “I wished someone would just come up and give me the time of day.”

Two weeks ago, Gaulden launched an online campaign on YouCaring to raise money for the group, which has been growing since he started it in February.

“My story’s not unique,” he said. “Millions of kids face this problem every year, and they feel invisible.”

Gaulden also released a spoken-word poetry video titled “The Homeless” on YouTube to help promote his campaign. The video shows Gaulden walking through the streets of San Diego as he and other volunteers in his group pass out food and clothing to homeless individuals.

“I had no bed to hide, I cried shattered pride,” Gaulden says in the video. “Thinking crazy thoughts, like I didn’t know most homeless lives end in suicide.”

The lyrics go on to describe Gaulden’s own experiences growing up homeless.

“I’m trying to humanize their situation and encourage other people to engage in dialogue,” he said. “I’ve lived it, so who better to go out there and make a difference?”

With his father in prison and his mother disabled by chronic illness, Gaulden spent more than 10 years without a home, constantly moving all over the country with his mother and sister.

When he entered his teens, he began writing stories and poetry as an outlet for the hardships he faced.

“When I was at my lowest points … I could pick up a pen and paper and escape,” Gaulden said. “It gave me a voice, a platform and a way out.”

Gaulden and his older sister KeQuanis Gaulden were the first in their family to get their high school diplomas. Despite their circumstances, when Michael and his family were in school they were always at the top of the class, said his sister KeQuanis.

“We studied together, and would say to each other, ‘one day we’re going to get past this,’” she said. “’This is our ticket out.’”

Gaulden’s passion for writing led him to UCLA. At age 17, Gaulden wrote a letter to his case manager explaining that he was working as a custodian at his high school to earn money for his family.

His case manager submitted the letter to an essay contest, gaining Gaulden an internship that introduced him to Reality Changers, an organization that helps disadvantaged youth get into college. Reality Changers helped him earn a full scholarship to UCLA, where he graduated from in 2014. After being accepted, Gaulden was able to use his financial aid to move his mother and sister into subsidized housing.

“If I never wrote that essay to my case manager … I wouldn’t be here today,” Gaulden said. “The power of words is evident to me.”

Now, Gaulden works as the director of business and community relations for Reality Changers. He is also writing a memoir about his experiences growing up homeless, which he hopes will be released within a year.

Gaulden’s campaign to provide homeless individuals with food, blankets, toiletries and other supplies began in February, when he would sporadically visit homeless people on the streets of San Diego, where he lives, to pass out sandwiches.

Friends and volunteers began to come along, and Gaulden started to collaborate with shelters, preachers and other organizations in San Diego. Now, more than 40 people regularly join him on a weekly basis.

They also occasionally visit Los Angeles to do the same for people living on Skid Row, Gaulden said.

When Michael interacts with homeless youth in the community, he shows there can be a way out of homelessness for them too, said Monique King, Michael Gaulden’s mother.

“He wants to prove to them that they can get out too … because that’s what he did,” King said. “We helped each other, and he also helps out in the community every chance he gets.”

Though the campaign is still young, Gaulden said he hopes it is opening up the conversation to people who want to help the homeless.

“We dropped a rock into a pond and created a ripple, but the goal is to make waves,” he said.