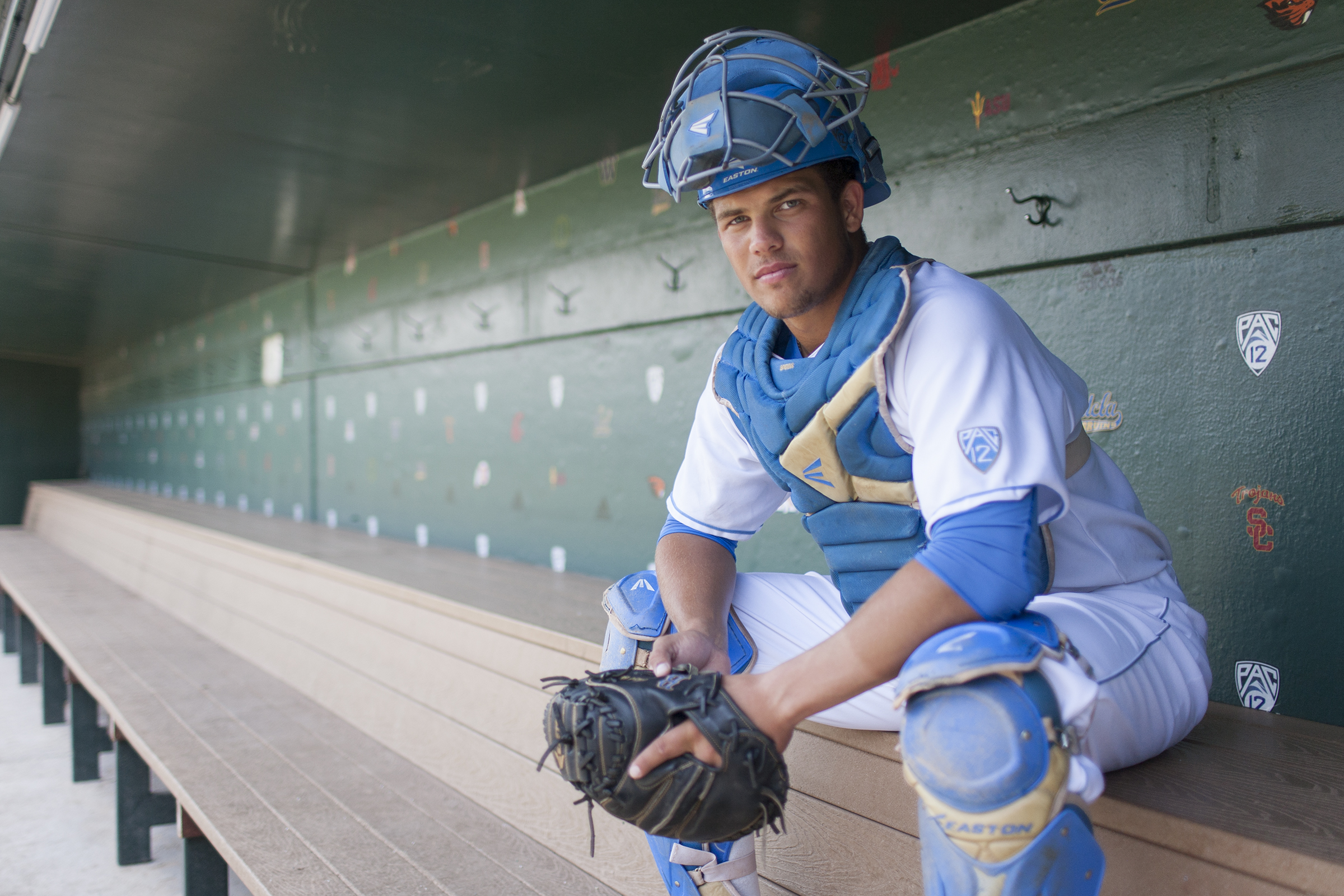 Redshirt sophomore catcher Darrell Miller Jr. has the pressure of living up to the high athletic precedent that his family members have set. His uncle, Reggie Miller, and aunt, Cheryl Miller, are members of the basketball hall of fame and his father, Darrell Miller Sr., played Major League Baseball. (Erin Ng/Daily Bruin senior staff)

The names ran off, one by one, from the public address announcer’s lips.

As the announcer reached the seventh spot in the lineup, he came upon the name Darrell Miller Jr.

The surname carries a little bit of extra weight for the UCLA catcher.

His uncle, Reggie Miller, and aunt, Cheryl Miller, are both in the Naismith Memorial Basketball Hall of Fame. His father – Darrell Miller Sr. – played catcher for the California Angels in the 1980s.

But when he hears his name called in the starting lineup, Miller Jr. said the pressure subsides a little bit. Instead of reminding him of the Miller family standard he wants to live up to, the announcement reassures him that he’s making a name for himself in a family filled with world-class athletes.

“Sometimes it’s a blessing and a curse to be in the Miller family because, yes, there’s high expectations, and there’s a level of achievement that comes with it,” Reggie Miller said.

Miller Jr. said living up to the expectations of his family name, as well as his own expectations, is a process.

“I just treat it like steppingstones. There’s definitely been (moments when) it’s like ‘Oh, OK, I’m getting there,’” said Miller Jr., a redshirt sophomore and UCLA’s starting catcher. “Like when home runs happen, when good things happen, you feel like a little relief of pressure.”

Moments like those were copious early in Miller Jr.’s freshman season. He started each of UCLA’s first three games of 2013, driving in three runs during the series against Minnesota.

“I came in. I started. I was starting as a freshman. Everything was going good,” Miller Jr. said.

But in the second series of his UCLA career, Miller Jr.’s ascent was put on hold. He took a swing in a game against Baylor and felt a pain in his shoulder.

For the better part of the next two years, Miller Jr. battled injuries day in and day out.

“It was very hard – very hard – to be honest. The injuries were big ones,” said Miller Jr., who tore his labrum and his left hamate bone. “Until college I hadn’t been injured. … They unfortunately happened at a big time in my life.”

After starting in four of UCLA’s first five games in 2013, Miller Jr. played in only six more all year. He had surgery on his torn hamate, which caused him to miss six weeks. When he returned, he still had trouble swinging the bat, so he had to have his pisiform bone removed.

The rehab process carried over into the 2014 season, when shoulder surgery limited Miller Jr. to six pinch-hit appearances all year.

“They were … injuries that aren’t the easiest to come back from,” Miller Jr. said. “Especially when a hitter, when it’s all on my lead hand, all on my offensive (hand) and my strength.”

Although Miller Jr. was off the field and mostly unable to play, 2014 was when he earned as much respect from his father as ever.

There was one play in 2014 that illustrated that type of resilience, Miller Sr. said.

“He hit a double in the alley … after not playing for a whole year,” Miller Sr. said. “When he did that I was thinking, ‘Oh my gosh, he’s gonna be OK.’ And I think that’s what the staff (at UCLA) saw, too. They thought, ‘Oh my gosh, he can handle this stuff. … He’s not afraid to fail.'”

Once the 2014 offseason began, Miller Jr. saw his opening. His body was finally back to full strength and UCLA’s incumbent starter at catcher, Shane Zeile had departed for the MLB draft. Miller Jr. said he put everything he had toward earning the starting role for 2015.

“By far, it’s the hardest I’ve worked in my life,” Miller Jr. said. “Cause I knew this was the opportunity of my life. This is my time. And if I don’t do this now, then I might never be able to do this.”

While he worked toward regaining a spot in the everyday lineup, Miller Jr. gleaned wisdom from one of his hall of fame relatives.

“We had a few conversations. A couple things I told him is: ‘Good things come to those who wait,'” Reggie Miller said. “You’re gonna get a better appreciation not only of your teammates but of the game of baseball.”

By the time UCLA opened its 2015 season in mid-February, that’s exactly how Miller Jr. felt. He said he was engaged by the simpler and more ceremonial aspects of the game, such as the national anthem and the pregame announcements of the starting lineup.

When he finally heard his name in the UCLA starting lineup once again, Miller Jr. said he felt a new level of significance that was all his own.

“That’s the first time I was out there (since 2013), and I feel like every time I hear the national anthem and my name in the starting lineup, I always go back to like, ‘Hey I worked for this,'” Miller Jr. said. “It feels surreal every time.”