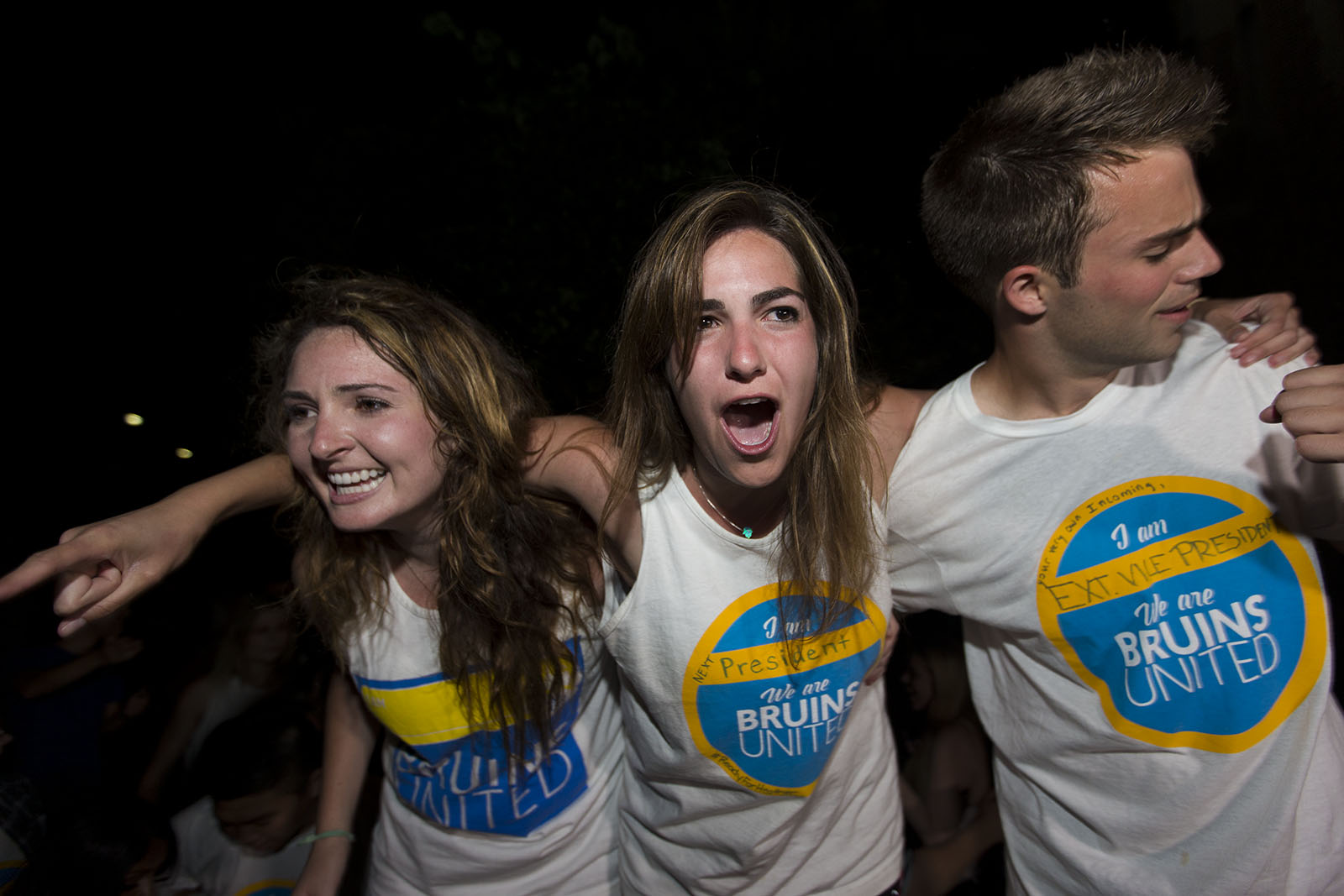 About 200 LET’S ACT! supporters gathered in a huddle for more than two hours in Wilson Plaza Friday night after hearing of their slate’s severe losses in last week’s Undergraduate Students Association Council election.

Several slate leaders took turns giving speeches, saying how they felt robbed of representation on the council table and marginalized as people of color.

“This time is different, this time we lost our hope,” said former USAC President and LET’S ACT! member Devin Murphy to the circle of students. “I never felt as hurt as I do tonight.”

The slate won just two of nine contested undergraduate student government positions to the Bruins United slate. The losses included seats across the board that LET’S ACT! held this year and in previous years, including the close race for the external vice president position, which Bruins United has not held for over a decade.

“Shame on them for not electing the person that advocates on their behalf every single day,” said Denea Joseph, this year’s LET’S ACT! candidate for the seat.

The results followed a week of controversy after leaked documents alleged LET’S ACT! sold alcohol and drugs and used student fees to fund its past two campaigns.USAC Election Board Chair Shagun Kabra said the board has done all it can to investigate these allegations and he is unsure whether the council will choose to investigate further. If found to have violated the Election Code, some elected candidates could still be removed and the Election Board would hold a special election to fill those spots.

Bruins United candidate Heather Rosen took the presidency by a large margin, winning about 60 percent of the vote. Rosen, the current financial supports commissioner, is the first female USAC president to be elected in the past four years. LET’S ACT! members have won the seat for the past two years.

“Being in charge of council, your job is to lead,” Rosen said. “My platforms are already underway.”

Rosen said she wants to institutionalize a middle-class scholarship, promote food security and sustainability and advocate for Dead Days before finals.

Though the Election Board launched a voter education campaign this year called #makeitcount, voter turnout still decreased slightly. About 29.6 percent of eligible student voters participated in this year’s election, the lowest turnout in the last six years.

Kabra said he was disappointed by the voter turnout results.

“This year, there has been a lack of communication between USAC and students,” he said. “Next year’s USAC council should make sure students know more about USAC.”

Bruins United candidate Heather Hourdequin, an incumbent, will serve as next year’s internal vice president. She received 51.8 percent of the vote, securing an office that her slate has held since 2010. Her platforms include promoting safety and self-empowerment and improving intercommunity relations.

Zach Helder from Bruins United won the external vice president position by a slim margin, taking 50.6 percent of vote. Helder said he hopes to have a diplomatic and constructive relationship with University of California leaders while in office, and follow through on his platform to work with the administration.

Ariel Rafalian from Bruins United won the runoff vote for transfer student representative after J. Cesar Flores, the only independent candidate, was eliminated with 713 votes. Rafalian won with 52.3 percent of votes against LET’S ACT! candidate Keytiana Hempstead after Flores’ votes were redistributed.

Bruins United also filled the positions of next year’s Academic Affairs commissioner and Financial Supports commissioner after Trent Kajikawa and Ruhi Patil won the seats with 53 percent and 52.5 percent, respectively. Bruins United councilmembers have held both these offices in recent years.

“We’re councilmembers,” he said. “We should work collectively to increase transparency at UCLA for students on campus.”

Kevin Casasola, LET’S ACT! candidate for Academic Affairs commissioner, said he was angered by the results since he felt voters told him his issues as a queer Filipino were not important to them.

“USAC doesn’t matter,” he added, while speaking to LET’S ACT! members Friday. “I will go back to my community and I will continue to fight for the issues that I believe in. I want all of us to take this anger and channel it in a better way.”

Candidates will be sworn in May 5 in Kerckhoff Hall 417.