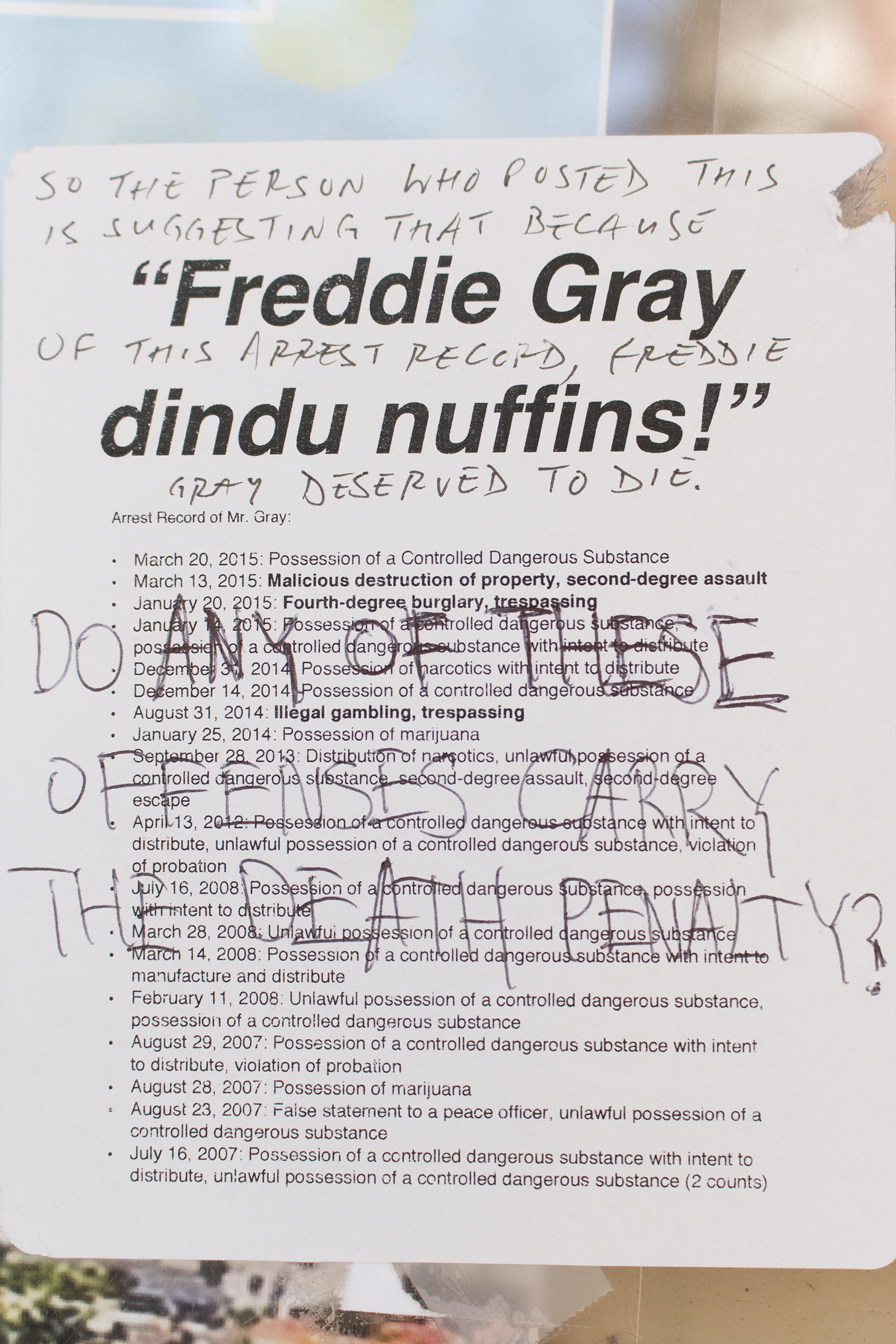 A large sticker posted near Campbell Hall uses Freddie Gray’s arrest record as a response to those protesting his death. A passerby wrote on the sticker criticizing its message. (Jessica Zhou/Daily Bruin)

Editor’s note: One of the images included in this article contains explicit language. We have decided to run this image because we felt it appropriate to thoroughly cover this campus incident.

Afrikan Student Union members are calling for UCLA to respond to racism on campus after finding stickers outside the group’s office and other spots on campus Wednesday.

Two versions of the stickers feature a policeman holding a sign. One reads, “If only Freddie Gray had followed the damn law, he’d still be alive,” and another reads, “Stop whining and start following the goddamn law.”

Passersby have since marked the stickers, expressing their disapproval.

The stickers were posted on the Afrikan Student Union’s bulletin board and in several North Campus locations, including the newsstand outside Campbell Hall, said Janay Williams, the Afrikan Student Union retention coordinator. Students have been unable to remove some of the stickers from near Campbell Hall but received help from UCLA in taking down those outside the group’s Kerckhoff Hall office, said Williams, a fourth-year microbiology, immunology and molecular genetics student.

The student group did not report the incident to university police because it is waiting to hear feedback from the rest of the Afrikan Student Union. UCPD spokeswoman Nancy Greenstein said any reports will be recorded and investigated once they are made.

Afrikan Student Union chair Kateisha Menefield said she and some other students felt violated by the stickers because the group’s office is meant to be a safe space for black students on campus.

Williams said she thinks the stickers indicate whoever posted them was responding to the Black Lives Matter movement and the recent protests in Baltimore following Freddie Gray’s death. Gray, a black man, died because of a spinal injury incurred in police custody.

Campbell Hall, which is currently under construction, houses the Academic Advancement Program that aims to support diversity at UCLA by offering academic counseling and programs for students from underserved backgrounds.

Student Affairs staff helped the Afrikan Student Union remove the stickers from outside its bulletin board, according to a statement made by UCLA.

“Although, the intent of whoever posted the stickers is unclear, the images and words were insensitive, especially in the context where and when they were placed and were not designed to engage in a respectful discussion of ideas. That’s an unfortunate missed opportunity,” the statement said.

Williams said she thinks Chancellor Gene Block should release a statement saying it is the students’ responsibility to fight racism on campus.

“It’s not about finding out who’s against us, but holding the university accountable, specifically Chancellor Block,” said Menefield, a fourth-year African American studies student.

UCLA does not plan to release another statement for now, said university spokesman Ricardo Vazquez.

The Afrikan Student Union plans to meet Thursday night to address the stickers. Menefield said she has chosen not to act until more student voices can be heard.

The group is contacting students and trying to learn more about the stickers’ origins, Menefield said. She added that the union currently has no suspects.