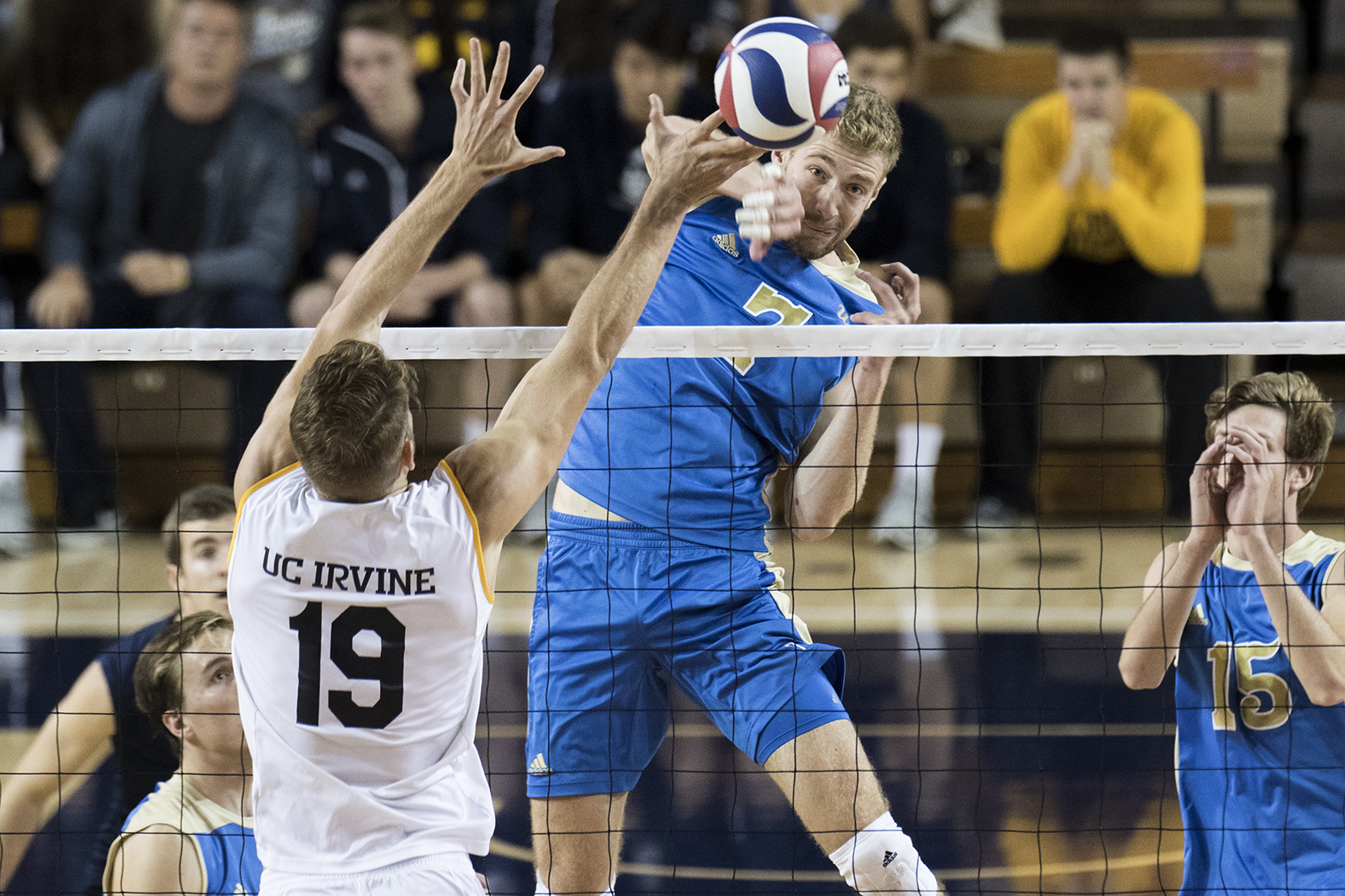 Sophomore middle blocker Mitch Stahl finished fourth on UCLA with 135 kills this season. Stahl was one of five underclassmen to play a consistent starting role for a young Bruin team this year. UCLA showed its youth at times, finishing the season 13-14 and ranked No. 12 in the nation. Austin Yu/Daily Bruin senior staff)

The 2015 season will likely go down in the storied history of UCLA men’s volleyball as a rebuilding year in every sense of the term. With four starting freshmen and only one starting upperclassman, the Bruins’ youth became their defining – and often limiting – characteristic.

Despite it being a year of ups and downs coupled with low expectations, the team reached the first round of the Mountain Pacific Sports Federation tournament before falling to top-seeded UC Irvine.

It was simple, really. In the end, the Bruins were beaten by a better team.

“This was definitely a season where we learned a lot about ourselves, about our team and about each other,” said sophomore middle blocker Mitch Stahl. “I think we have a better perspective of what we need to do in the offseason, the summer and the fall to prepare so this doesn’t happen again next year.”

UCLA, ending the year ranked No. 12 in the nation with a 13-14 overall record, fell into a rhythm over the course of the season: It beat the teams it was supposed to beat and lost to those it was supposed to lose to. Only once, in an upset of then-No. 3 USC, did the team break from that pattern.

While that was good enough to clinch the eighth and final spot in the playoffs thanks to a season-series sweep of Stanford, UCLA knew it wouldn’t advance far if it couldn’t overcome the top teams.

The four Bruin freshmen were all thrown into this challenge by the end of the 2015 season, joining Stahl, redshirt junior middle blocker Trent Kersten and sophomore libero Jackson Bantle in the starting lineup. While never quite figuring out how to beat the MPSF elites, the starters showed resilience in the face of some of the best teams in the nation.

Stahl and Kersten, two of the veterans of the group, anchored the middle of the court for the Bruins, leading the starters in hitting percentages at .365 and .387 respectively.

Not every position was as simple as that. Coach John Speraw was forced to find solutions multiple times at setter, eventually resorting to younger and younger options available to him.

Losing Smith hurt more than just the offense as his .9 blocks per set was tied for third-highest on the team, behind only Stahl and Kersten. While Matheis held his own, it took a few matches to establish a consistency that the freshman now expects to carry forward into upcoming seasons.

“We were playing a lot better at the end of the season, so (we need to) just continue that into the offseason and keep the team chemistry up,” Matheis said. “I think we have to stay positive because we know we’ll compete next year and we’ll have the pressure to be there.”

The freshmen hitters were led by MPSF Freshman of the Year J.T. Hatch. The outside hitter had a team-high 2.91 kills per set over the course of the season and was one of just two Bruins who played in every match. Hatch also garnered second-team All-MPSF honors and was the first UCLA player to win Freshman of the Year since Brandon Taliaferro in 1997.

Despite its bright spots, the UCLA offense often struggled against opponents. Early in the season, the Bruin block was able to help make up for that with a staunch defensive effort, but the loss of Smith limited the team’s blocking ability. It wasn’t until the final matches of the season – when Matheis was fully established – that the offense really took hold.

Looking toward next season, the Bruins expect to lose just two players: Kersten and redshirt senior Clayton Paullin. Otherwise, the roster will remain very similar to what it is currently. With the carryover into 2016, Speraw recognized the importance of the upcoming months for his team.

“Our offseason is going to be a real difference-maker,” Speraw said. “We talk about that in the program, and I sure hope that the guys understand that. We have to get physically significantly stronger, and the only time you can make real significant strides is during the offseason.”

He added that every individual will be working on specific aspects of his game as the team moves forward as a whole.

The Bruins will remain a young team going into 2016 with a nearly senior-less roster and at least four new recruits entering the program, but the foundation of 2015 gives them a chance to make the necessary strides toward change and, eventually, success.