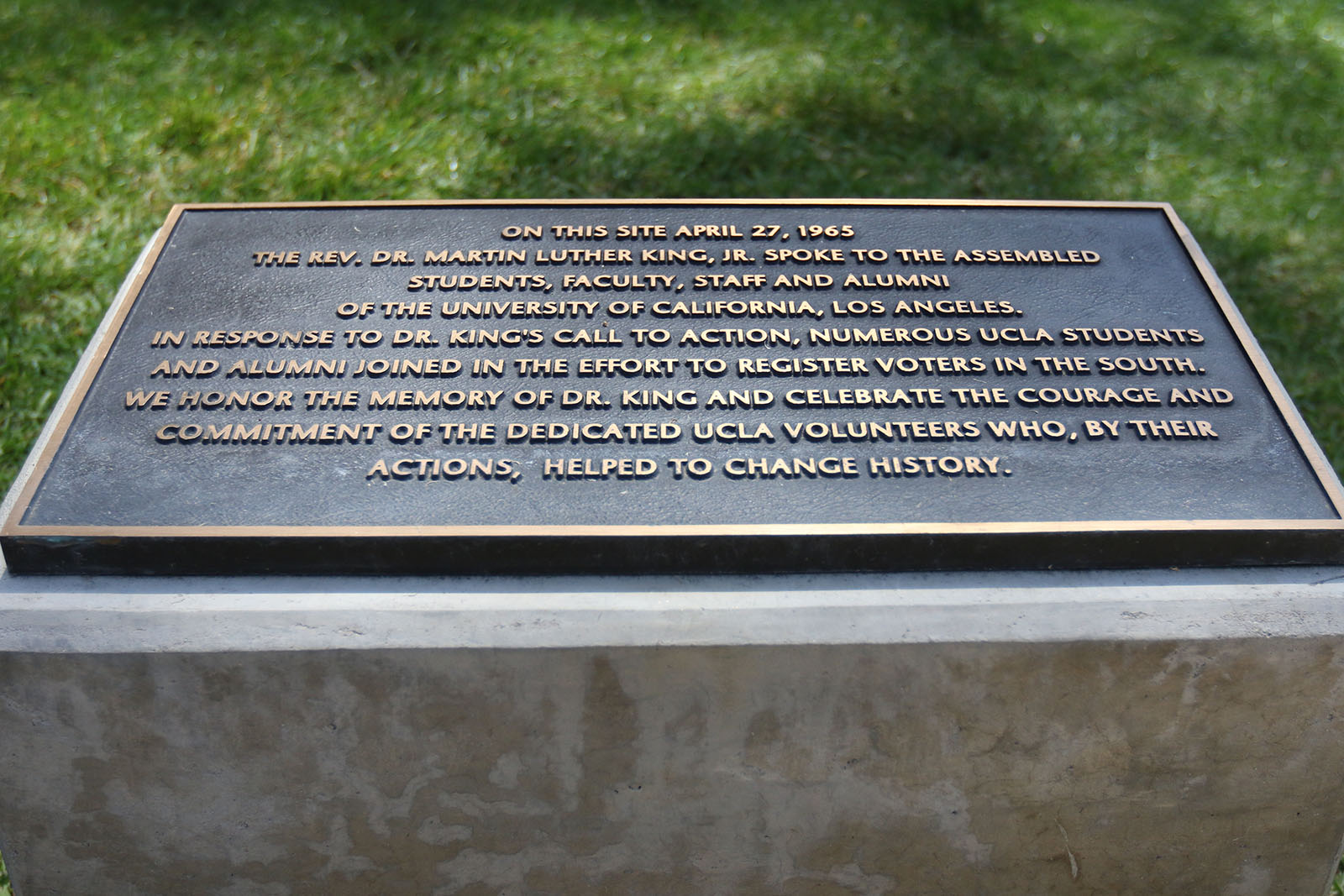 Martin Luther King Jr.’s speech at UCLA on April 27, 1965 is commemorated with a plaque at the bottom of Janss Steps. (Mary Kate Turner/Daily Bruin)

Martin Luther King Jr. spoke of the need for students to get more involved in the Civil Rights Movement. But 50 years later, some UCLA scholars say they think students are straying further from King’s call.

More than 50 years after the end of segregation and the gain of voting rights, some say the country is on the verge of a second Civil Rights Movement. Ignited by the deaths of Michael Brown, Eric Garner and other unarmed black men by police officers, the Black Lives Matter campaign has gained traction in recent months.

Paul Von Blum, who lectures jointly in the African American studies and communications studies departments, said he thinks the cause for action is strong, but the environment students live in today is less conducive to student activism in general.

“We live in times of economic insecurity,” Von Blum said. “Students are concerned about debt and job opportunity. But there still is an obligation for students to become active leaders, and at the moment there is much to be active about.”

UCLA law professor Gary Orfield said he thinks the lack of a strong leader like King, combined with Republican dominance in Congress and on the Supreme Court in the last few decades, has prevented the movement from making any large-scale political or social gains.

“We have a hostile court and political party that’s basically whites-only, and that makes it very difficult to change the law,” said Orfield, the co-director of the UCLA Civil Rights Project/Proyecto Derechos Civiles. “I’d say we’ve gone backwards on some important issues, particularly since the 1980s in terms of civil rights.”

Perry Van Hook, a former Daily Bruin staffer who covered King’s speech in 1965, said he thinks today’s movement is about changing racist attitudes, which can be more difficult to do than changing legislation.

“Legislation may change what is done, but it can’t change what’s in people’s hearts. That’s a function of time to change,” Van Hook said, citing King’s quotes from the speech he gave at UCLA. “King said that in his speech and 50 years later it’s still true.”

Despite uncertainty about the effectiveness of today’s movement, Orfield said he would not count out the possibility of massive change.

“In the beginning of the 1960s nobody thought it would be a mass movement. It started with a bunch of little things that exploded under the right conditions into huge things that captured the country’s attention,” Orfield said. “The movement came very fast and was very deep and dramatic.”