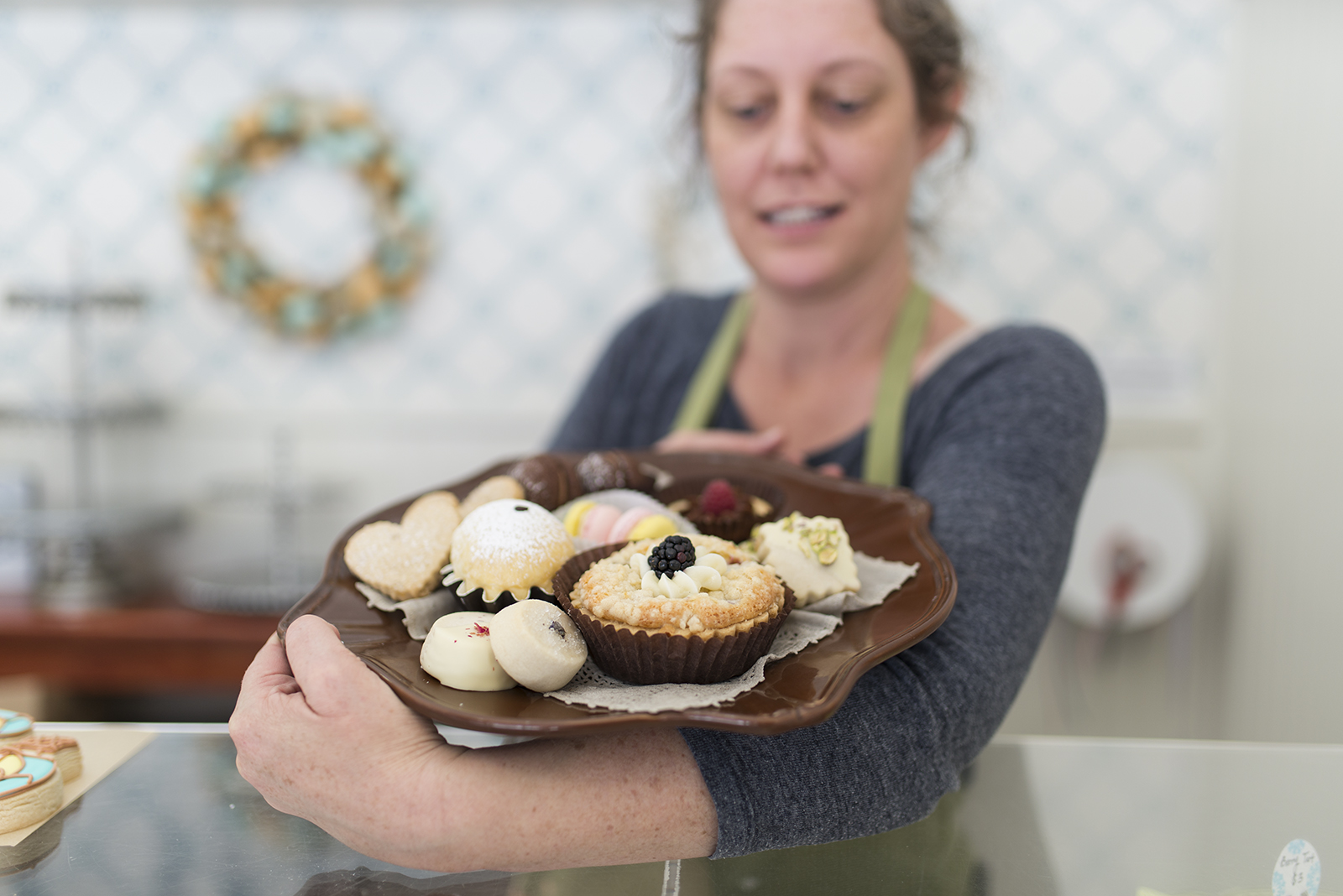 Megan Driscoll, the owner of Eat Sweets Pastry, loves the freedom that comes with being a pastry chef of her own store located on Gayley Ave. She decorates the pastries and personalizes them, baking numerous cupcakes, cookies and macarons. (Angie Wang/Daily Bruin senior staff)

Eat Sweets Pastry, a boutique pastry shop that specializes in shortbread and decorated cookies, will leave Westwood when its lease ends. Its last business day will be on Saturday.

Eat Sweets Pastry will operate from its commercial kitchen in Lincoln Heights, about 14 miles east of UCLA, while Megan Driscoll, the bakery’s owner and pastry chef, searches for a new storefront location. The owner of La Galleta, the sandwich shop and bakery that previously occupied the property, intends to take over the location again, Driscoll said.

Driscoll didn’t originally plan to open a pastry shop, but she said she loves that she has the freedom to create whatever she likes.

In March 2012, building managers contacted Driscoll to ask if she would be interested in using the property. Six weeks later, she opened Westwood’s only storefront pastry shop.

“It happened so fast,” Driscoll said. “I didn’t get a chance to say no.”

When she moved in, Driscoll decorated over the room’s glaring orange paint and covered the half-wall of tiles with bright, patterned pastels. She keeps her collection of cake stands on the top shelves behind the pastry counter.

Driscoll said her father, who is also a chef, built the pastry tables on which she displays her assortment of baked goods.

“She built this place from scratch, just like she bakes from scratch,” said Anne Driscoll, Driscoll’s mother.

Driscoll’s co-pastry chef Jenny Yamazaki said she loves the opportunity to bake and decorate personally, rather than on a commercial scale.

“I love walking in in the morning and smelling whatever’s in the oven,” Yamazaki said.

She added that she will miss the customers and the students who work in the store, and she plans to keep working at Eat Sweets Pastry in the future when it opens a new location.

Driscoll said she also makes cookies for production companies and TV shows including “Fast and Furious” and “American Horror Story.”

She recalls the strangest cookie decoration request she’s filled – a customer had undergone major heart surgery, and wanted to thank his doctor. He ordered a cookie shaped and decorated like a realistic human heart, valves and all.

Fourth-year neuroscience student Montana Upton has worked the storefront since last summer. She said the bakery is a nice change of pace from the campus buzz.

Eat Sweets Pastry’s customers also said they feel at home in the bakery.

Ginny King Supple, a volunteer at Ronald Reagan UCLA Medical Center, stops by the shop every day after her bedside buddy volunteer shift.

“I have to walk 2 miles (from my home) to the shop and 2 miles back to be able to eat like this, but it’s worth it,” Supple said.

Supple has been a consistent weekly customer for nearly three years, and she said she intends to follow Eat Sweets Pastry wherever they move.