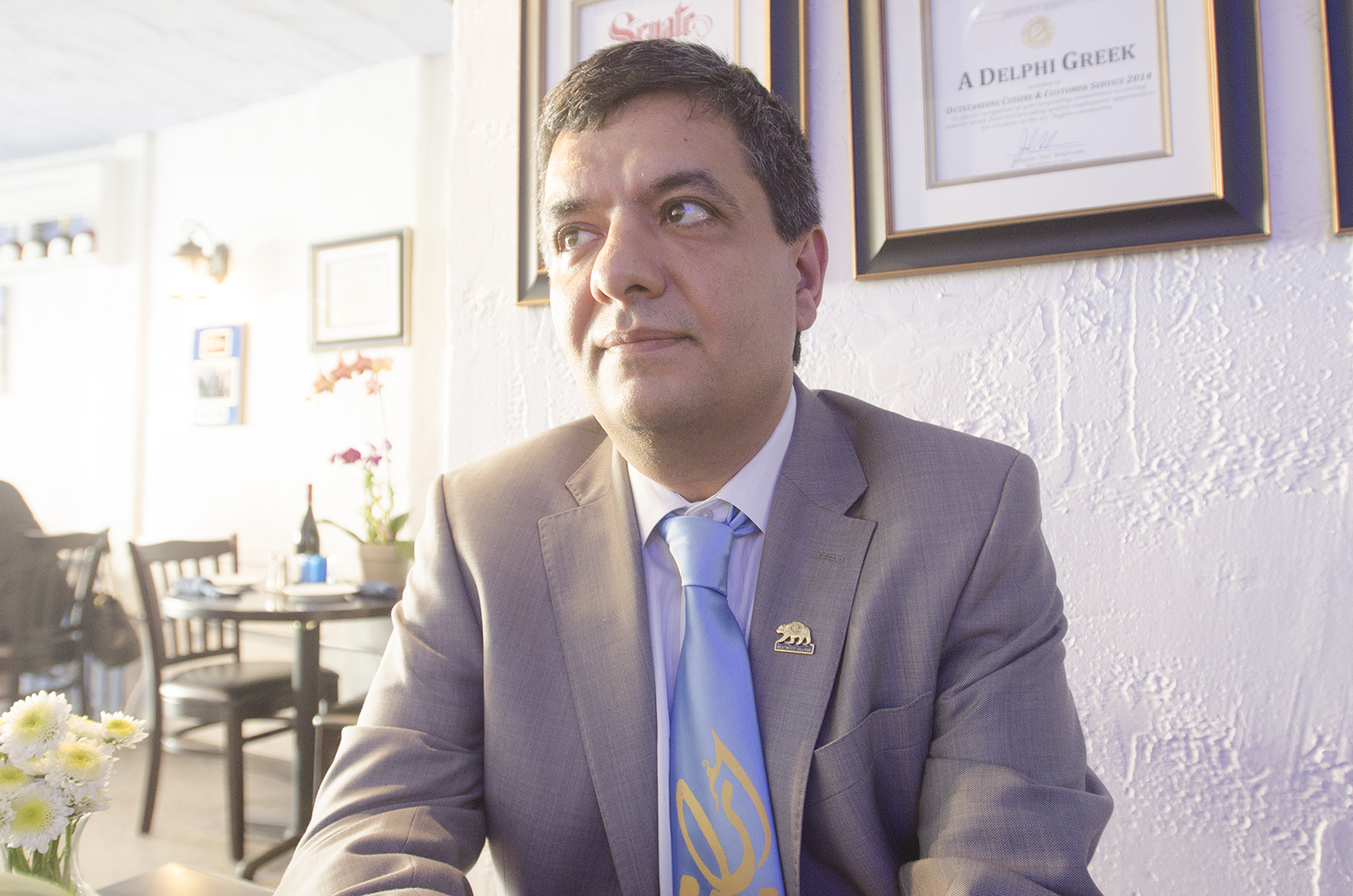 Roozbeh Farahanipour was nominated for the state Senate’s California Heroes Month in late 2014 for his work against human rights violations in Iran. (Julie Song/Daily Bruin)

Every time he sees the Pacific Ocean, Roozbeh Farahanipour said he misses the Persian Gulf and Iran.

He hasn’t lived in Iran since 2000, when he fled from the Islamic regime to the United States. Though he said the state he came from no longer welcomes him, he is now focusing his energy on benefiting Westwood.

“You have to move forward and add value to the community you live in. … At this point, not only the Westside needs me, but I need them as part of my new family and the new society that I work with,” he said.

Farahanipour, who has owned the restaurant Delphi Greek in Westwood since 2009, was elected as the new president of the West Los Angeles Chamber of Commerce in March.

Farahanipour said being elected as president of the West Los Angeles Chamber of Commerce reminds him of the opportunities for democracy in the United States, something he could not take part in when he was a journalist under the Islamic Republic of Iran.

It is difficult, Farahanipour said, to live as an enemy of the state in his homeland.

“It is a conflict of emotion for me,” he said. “I belong to (Iran) and I love to serve those communities, but the government tries to execute me.”

Regime police arrested Farahanipour a total of three times for statements against the Islamic Republic of Iran before he fled. The first arrest came after he gave a speech at his law school describing women’s rights before and after the institution of Islam.

Police arrested him a final time in 1999 after he led a student uprising, and he was tortured in prison. Following his last arrest, Farahanipour said he saw his face in a newspaper with an order for execution along with it.

Farahanipour said he then fled through Turkey to the United States, where he received political asylum.

Since his arrival to the United States 15 years ago, Farahanipour has become involved in many Westwood organizations. He worked his way up from delivering to-go orders to becoming general manager of Shamshiri Grill in Westwood and then purchasing Delphi Greek. He is also a member of the Westwood Neighborhood Council, Friends of Westwood Library, the Westwood Village Rotary Club and the Westwood Community Council.

Farahanipour said he works almost 16 hours each day between the West Los Angeles Chamber of Commerce, various Westwood organizations, his restaurant and his efforts to support the protection of human rights in Iran.

In late 2014, Farahanipour was nominated for the state Senate’s California Heroes Month. Senator Joel Anderson (R-San Diego) said he earned it for his continued work against freedom of speech and human rights violations in Iran.

“If more people were like Roozbeh, this would be a better world,” Anderson said. “He’s a great American; he’s living the American dream.”

Farahanipour said the award made him feel like he belonged not only to his community in Westwood, but also to California.

Anderson said he thinks Farahanipour was key in the passage of the California Public Divest from Iran Act, which divested retirement investments in state funds from Iran starting in 2009.

Farahanipour has given testimonies of the travesties he lived with in Iran since he arrived in the United States. One of his earliest memories of the regime is from when he was 9 years old and priests from his Italian Catholic elementary school were executed and accused of spying for Israel.

He has testified to the state Assembly, the United Nations and the European Union among others, and leads one of the movements for the creation of a secular republic in Iran.

Farahanipour also aided the closure of the Towhid Prison – where he was kept and tortured the third time he was arrested – through his testimonies of the human rights violations he experienced there.

Parvaneh Nasiri, Farahanipour’s mother, was able to follow her son two years after he left Iran, and now she also lives in West Los Angeles.

“I am proud of what he has done for Iran, and he has tried to free Iran for a long time,” Nasiri said.

Farahanipour said his goal is to benefit the community, and now that he is president of the West Los Angeles Chamber of Commerce, his community has grown to include the 12 neighborhoods that encompass West Los Angeles.

Hamid Mosavi, the owner of Shamshiri Grill in Westwood, employed Farahanipour when he arrived in the United States, and said that Farahanipour’s integrity and persistent work ethic were the reasons he promoted him over the years from a delivery driver to the general manager of his restaurant.

“I kept testing him, and he never failed,” Mosavi said.

Some of Farahanipour’s goals are to encourage larger international businesses to work with the small businesses in Westwood and to have the chamber serve as a bridge between the community and the commerce of Westwood.

By the end of the year, Farahanipour said he would like institutions such as UCLA to become active in the West Los Angeles Chamber of Commerce, and eventually open up networking events, internships, meetings and part-time jobs to students.