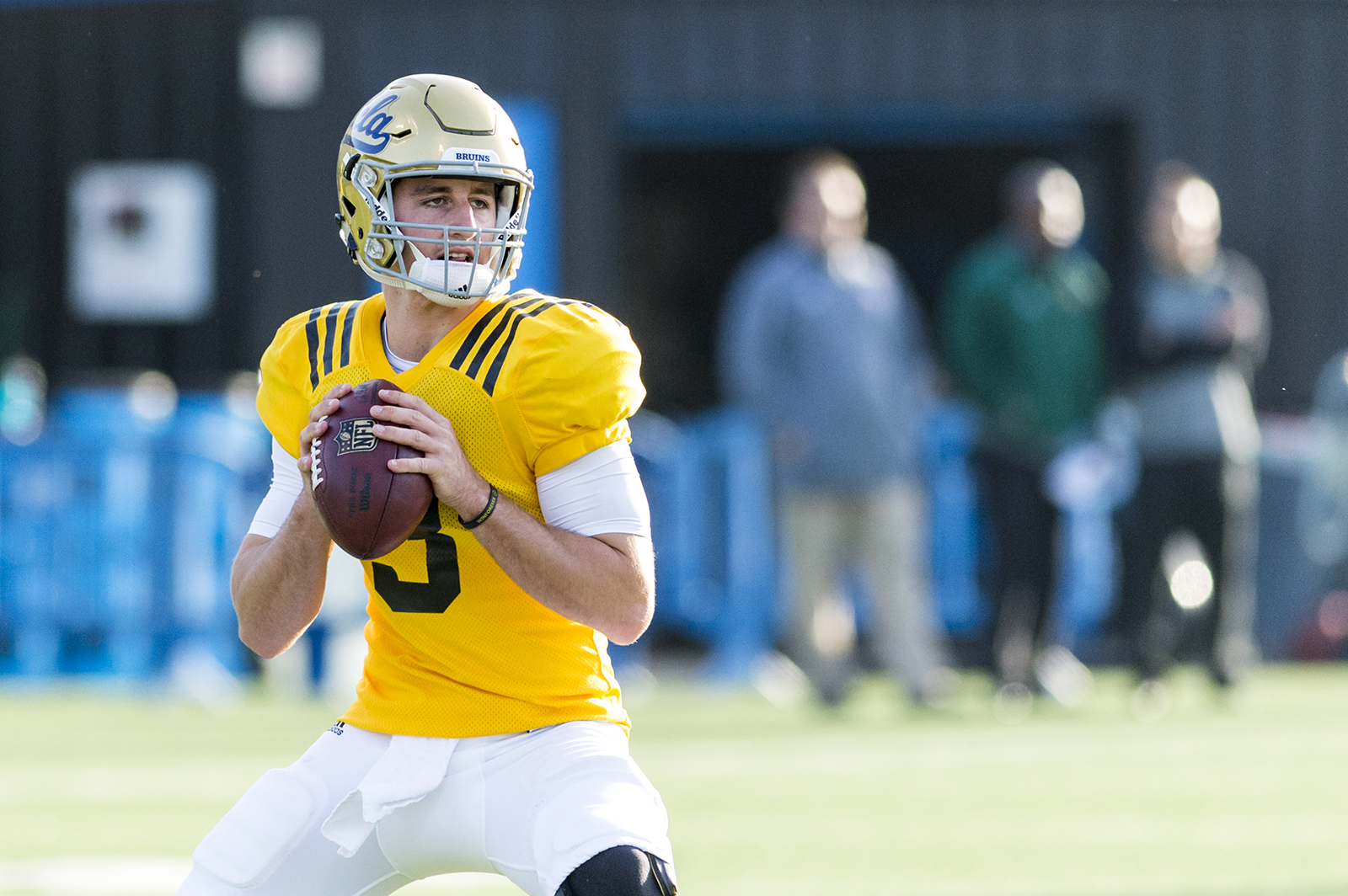 Freshman Josh Rosen continues to impress in spring practice, showing poise and knowledge that has impressed both players and coaches. (Max Himmelrich/Daily Bruin)

The competition for quarterback, which has proven to be the dominant storyline of UCLA football’s spring practice, just revealed some plot twists.

Redshirt freshman Aaron Sharp is in the process of transitioning from one of six quarterback candidates to a more prominent role as receiver, having traded his yellow jersey for navy blue. Sharp didn’t feature in practice as a quarterback, not receiving snaps even in the two-quarterback system.

Never mentioned in the discussion of who would succeed Brett Hundley, Sharp is a fast study in the realm of receivers.

“He looks natural, it’s just a natural thing for him out there,” said senior receiver Jordan Payton. “He has so many skill sets that people don’t have – he’s fast and he naturally gets it.”

After showcasing four quarterbacks simultaneously Saturday, the team has returned to a two-quarterback rotation. Wednesday featured freshman Josh Rosen and redshirt junior Mike Fafaul in 11-on-11, while redshirt junior Jerry Neuheisel and redshirt sophomore Asiantii Woulard also received some snaps during 7-on-7 and end zone drills.

“Nobody ever feels left out,” said offensive coordinator Noel Mazzone on the rotation system. “They feel like, ‘OK, well, I’m going to watch that guy do it, and I get to go out and prove that I’m better than him the next day.’”

The guy proving himself Wednesday was Rosen, who looked more comfortable running the offense. As evidenced by his more vocal leadership on the field, the freshman is ready to be the leading man.

Rosen was absent from practice Monday for personal reasons, but returned Wednesday without missing a beat. The quarterback looked the most poised he’s been this spring and seems to have found his rhythm within the team’s rotations.

“He’s a big picture guy. He’s got the wide vision and he’s got the ability to go zoom vision,” Mazzone said. “Mentally, he’s a lot older than I am. He’s a smart guy.”

Rosen doesn’t look like the new guy, and eight practices into spring training, he isn’t.

Mazzone said that the UCLA program isn’t all new to the rookie, who carries over skills and habits from a strong high school system at St. John Bosco. Additionally, Rosen has been on campus for 13 weeks now, having thrown with veteran receivers during the offseason.

“It’s impressive, it’s very impressive, how fast he developed. Two weeks in, three weeks in, he’s learned the offense and he can run it,” Payton said. “That’s why he was rated so high, why he had so much hype behind him, because he can do things like that. He has great potential and I’m excited to see his future.”

The cast of quarterbacks vying for the starting position includes four players at this point: Rosen, Fafaul, Woulard and Neuheisel. Woulard recently entered center stage with strong practice performances and Neuheisel seems to be fading into the background.

Fafaul had his best practice Wednesday, throwing long and accurately in addition to proving his ability to make plays. This spotlighted the fact Neuheisel’s arm is weaker than the other three. Despite his technical ability, when it comes to hitting receivers, the redshirt junior can’t throw as far downfield.

While his experience and knowledge of team mechanics made him a promising candidate early on, the three younger players are coming into their own and coming after his spot.

Entering his final season as a Bruin, Payton has firmly stepped into a leadership role as a standout receiver on the deepest roster UCLA has had in recent years.

“Jordan Payton is Mr. Reliable. Sometimes you take him for granted because he does everything well,” said wide receivers coach Eric Yarber. “He drops well, he catches well, he runs great routes. Just like the mailman, he delivers – rain, sleet or snow.”

With team leaders such as Hundley and former UCLA linebacker Eric Kendricks graduated, Payton looks to fill the leadership vacuum this season. Payton said that he believes UCLA to be a premier program heading into the 2015 season.

While Payton is an example of excellence for the UCLA coaching staff, redshirt freshman receiver Jordan Lasley was anything but during the first week of spring practice. Prone to a short temper, Lasley was fighting with teammates on the field and becoming overly emotional.

Yarber said that Lasley was strictly informed by the coaching staff that he needed to prove himself through his actions and not his words.

“Jordan Lasley is doing well out there. He’s taken a real big step, getting better, learning the plays, being coachable,” Yarber said. “That was the thing we harped on him at first – be coachable, you can’t freelance out here.”

Now more receptive to criticism and more with the program, Lasley has the potential to star in the Bruins’ wide field of talented receivers.