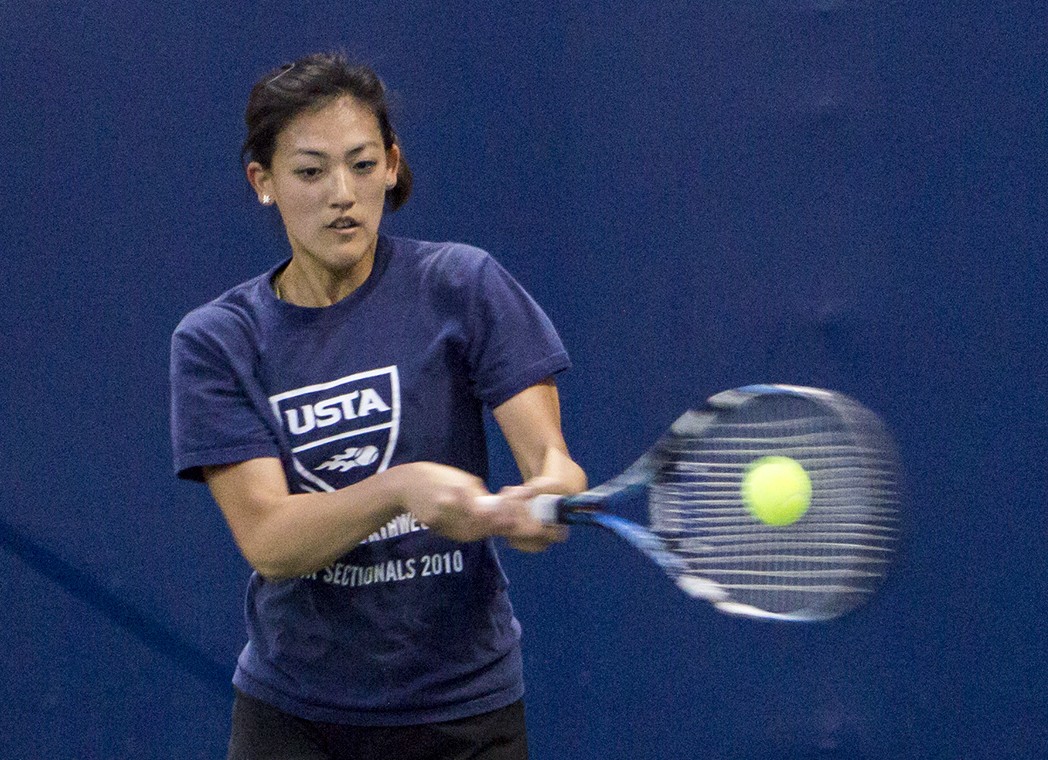 Fourth-year computer science student Grace Lin said tennis is no longer stressful for her now that she is part of a team. (Alyssa Dorn/Daily Bruin)

Two years into Grace Lin’s tennis career, the sport had grown too stressful.

Then she joined her high school team, where she found that the team aspect could help curb the negative thinking that often clouds a tennis player’s mind.

Now a fourth-year computer science student, Lin has experienced the same phenomenon in her four years on the UCLA club tennis team.

With a relaxed atmosphere and a focus on team chemistry, the Bruins enter this weekend’s USTA Tennis on Campus National Championship in Cary, N.C., with a legitimate chance at a title.

The Bruins enter the tournament with a Southern California sectional championship and losses to only Cal Poly and defending national champions UC Berkeley. Players attribute the success to a relaxed atmosphere with a focus on team bonding.

“It’s just too much fun because I’d say a majority of my friends are from club tennis,” said fourth-year physiological science student Greg Bogie. “It’s not like you’re just playing tennis. You hang out afterwards, you go to socials, get meals together.”

Current club president Albert Ha, a fourth-year psychobiology student, has helped foster team spirit by scheduling social events including weekly team meals as well as bowling and mini-golf outings. In May, the team will attend Disneyland’s 24-hour celebration of its 60th anniversary.

“It’s just a great environment because all the people are really respectful of each other, there’s no real drama,” Ha said. “Everyone’s kind and everyone’s really good at tennis.”

Ha spent his first three years at UCLA on the general side of the program before he improved his game enough to make the competitive team in his fourth year.

“Every year, there’s one guy who’s gung-ho about practice but not that impressive winning matches, and he just gets better,” said coach Mark Otten. “Albert’s so involved, he’s playing all the time, he’s at the courts all the time.”

While on the general side of the team, Ha began his ascension to president as safety officer, bringing a first-aid kit to practice everyday, before becoming treasurer. Throughout, he has committed himself to the program. Bogie said Ha will give up his free time to feed balls to teammates outside of practice.

“It really defines my college experience,” Ha said. “Every part of it is very meaningful. Every day I spend here relieves so much stress from my life, it keeps me active and keeps me mentally healthy.”

First-year undeclared life sciences student Joy Huang said that often in tennis, good players can be arrogant, but she hasn’t found that in the club tennis program.

“Everyone gets along really well, which I think is kind of rare in tennis,” Huang said. “Tennis is a really solitary sport … you’re very much alone in your head … But this team really supports each other, roots for our singles player when we know they’re feeling down on themselves.”

Huang said Otten’s positivity helps players deal with a sport in which it is easy to start thinking negatively.

Lin knows well how team spirit can help in dealing with negative thinking.

“It’s a different feel for tennis since it’s team tennis rather than you going out there by yourself,” Lin said. “Learning to have more fun with tennis helped me enjoy it more, so just talking to people and becoming friends with them really helped me see how they felt tennis was really fun and that influenced me to have more fun on the court.”

When she came to UCLA, Lin sought to find a community similar to the one from her high school team. She was pleasantly surprised.

“College tennis is even better because you meet more people,” Lin said. “You play against better people and you play with awesome people that you get closer to throughout the year.”