UCLA men’s basketball runs out of magic against Gonzaga 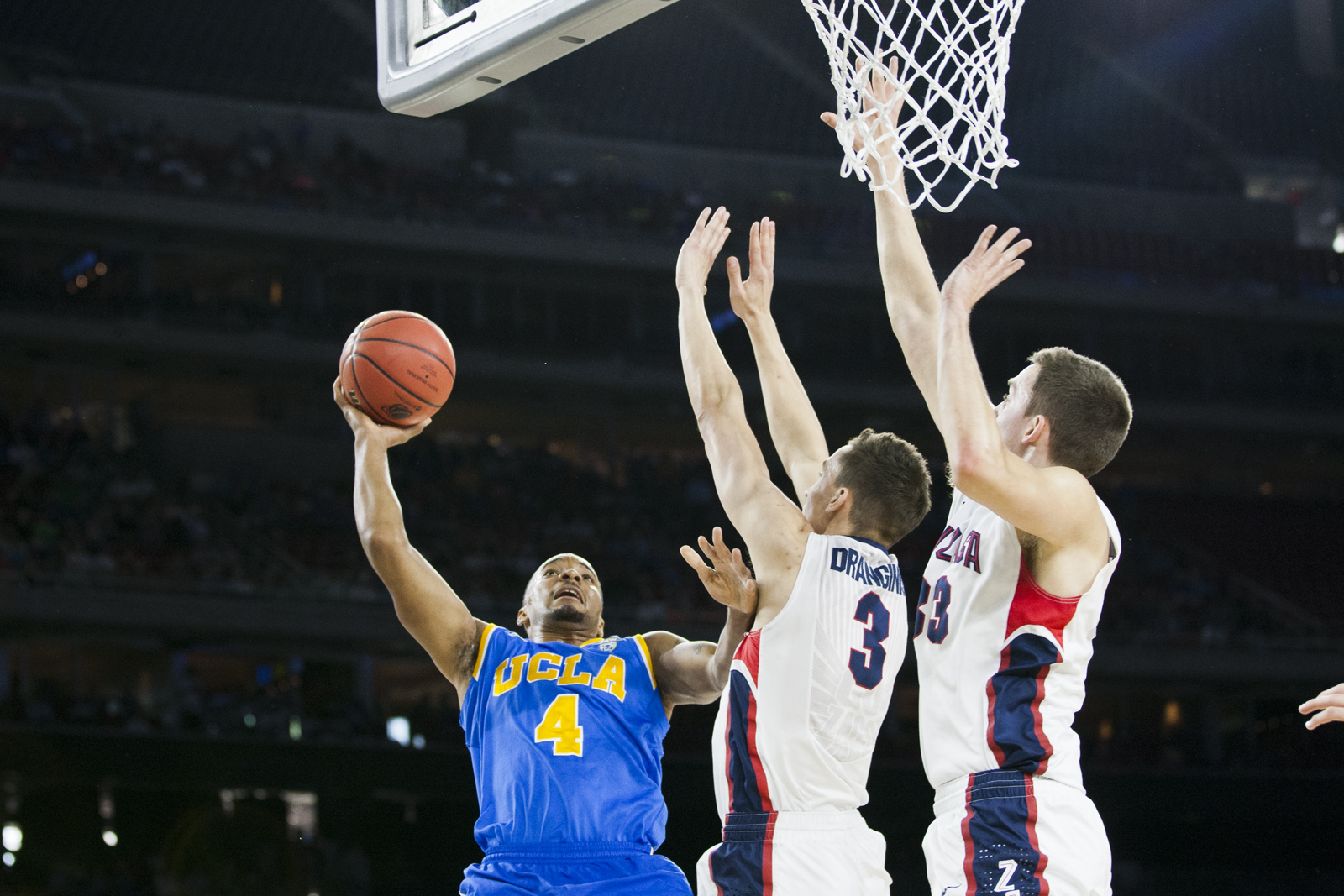 Senior guard Norman Powell was the lone UCLA player who found a way to consistently drive and score against the Gonzaga defense Friday night. Powell tied for a team high with his 16 points, nearly matching his team-high scoring average of 16.4 points per game. (Katie Meyers/Daily Bruins senior staff)

HOUSTON — It was as good as the Bruins could’ve hoped for. And it still wasn’t enough.

Unable to take advantage of an uncharacteristic off night from sharpshooting Gonzaga, UCLA’s dark-horse ride through the NCAA tournament came to an end – as did its season – as the Bulldogs defeated the Bruins 74-62 Friday night at NRG Stadium.

After two weeks of imitating Cinderella, the other shoe – slipper? – finally dropped as the Bruins fell to one of the tourney’s heavyweights.

Fittingly, it came at the hands of a 7-foot-1, 288-pound big man with a name few could pronounce and a game no Bruin could stop.

Gonzaga center Przemek Karnowski went over, through, around and behind UCLA’s defense en route to a game-high 18-point, nine-rebound performance.

“They were setting double-post screens for him, so you were going through two guards to get to him, and when he gets the ball he’s in the perfect operating area,” said junior center/forward Tony Parker. “He just really finished well today – and that’s what hurt us.”

The Bruins sent every big they had, and then some, at the Bulldogs’ center, after it became abundantly clear – somewhere around his third-made hook shot – that no UCLA player could defend Karnowski one-on-one.

It still didn’t stop him.

With freshman center Thomas Welsh in front of him and freshman foward Kevon Looney to his right, Karnowski spun the ball behind his back to a wide open Domanatas Sabonis – Gonazaga’s other big – not once, but twice for easy, back-breaking baskets.

“A 7-foot-1, 300 pounder throws a behind the back bounce pass,” said sophomore guard Bryce Alford shaking his head. “You don’t see that very often.”

UCLA didn’t see much go its way Friday night. The Bruins time and again failed to take advantage of a plethora of opportunities that could’ve helped them stave off midnight.

An 0-11 first-half stretch by Gonzaga was met with a more than six-minute scoreless stretch by UCLA. A 6-0 run by the Bruins out of halftime cut the Bulldogs’ lead to 35-34, only to see Gonzaga go on a 12-0 tear of its own. And in the waning minutes of the game, both Alford and sophomore guard Isaac Hamilton missed point-blank layups that could have had UCLA making a little more noise in the tournament.

Instead, the Bruins sat in a subdued locker room – save for a few back claps and camera shutters – still processing the finality of this latest and last defeat and what might have been.

It was as good as they could’ve hoped for and it still it wasn’t enough.

And yet, maybe it was.

While Alford was short on answers as to what caused UCLA’s 38.8 percent shooting night – the point guard began each of his first two responses to reporters with “I don’t know” – he and his team certainly silenced their doubters over the past two weeks.

On Friday night in Houston “good” finally proved better than “lucky,” but UCLA being there in the first place proved that it was a little bit of both after all – and certainly worthy of a tournament bid.

“To come from where we started at and even before that, losing what we did to the NBA, we have five guys on an NBA roster, and to say that we came back to the Sweet 16, you have to hold your head up high about that,” Alford said.

Two seats down from Alford and with even redder, blearier eyes, senior guard Norman Powell put forth similar evocations.

Less than 15 minutes removed from the end of his college career, he let out a long sigh.

“It’s tough, it’s real tough. We made a run. I thought we were going to take the lead. (It’s) tough to see your career end like this,” he said.

In his final appearance as a Bruin, the senior guard was vintage Powell. He scored 16 points – most by driving the lane – hauled in five rebounds and played the entire game, until coach Steve Alford pulled him in the contest’s final minute to let the crowd pay their respects.

But like Alford, Powell’s answers soon leave what UCLA failed to do and instead focus on what the Bruins – surprisingly – did do.

“I’m just glad I was able to do this with those group of guys,” Powell said. “It’s my last time ever stepping on a college court and I could not be more proud of this team. I love these guys like they’re my brothers.”