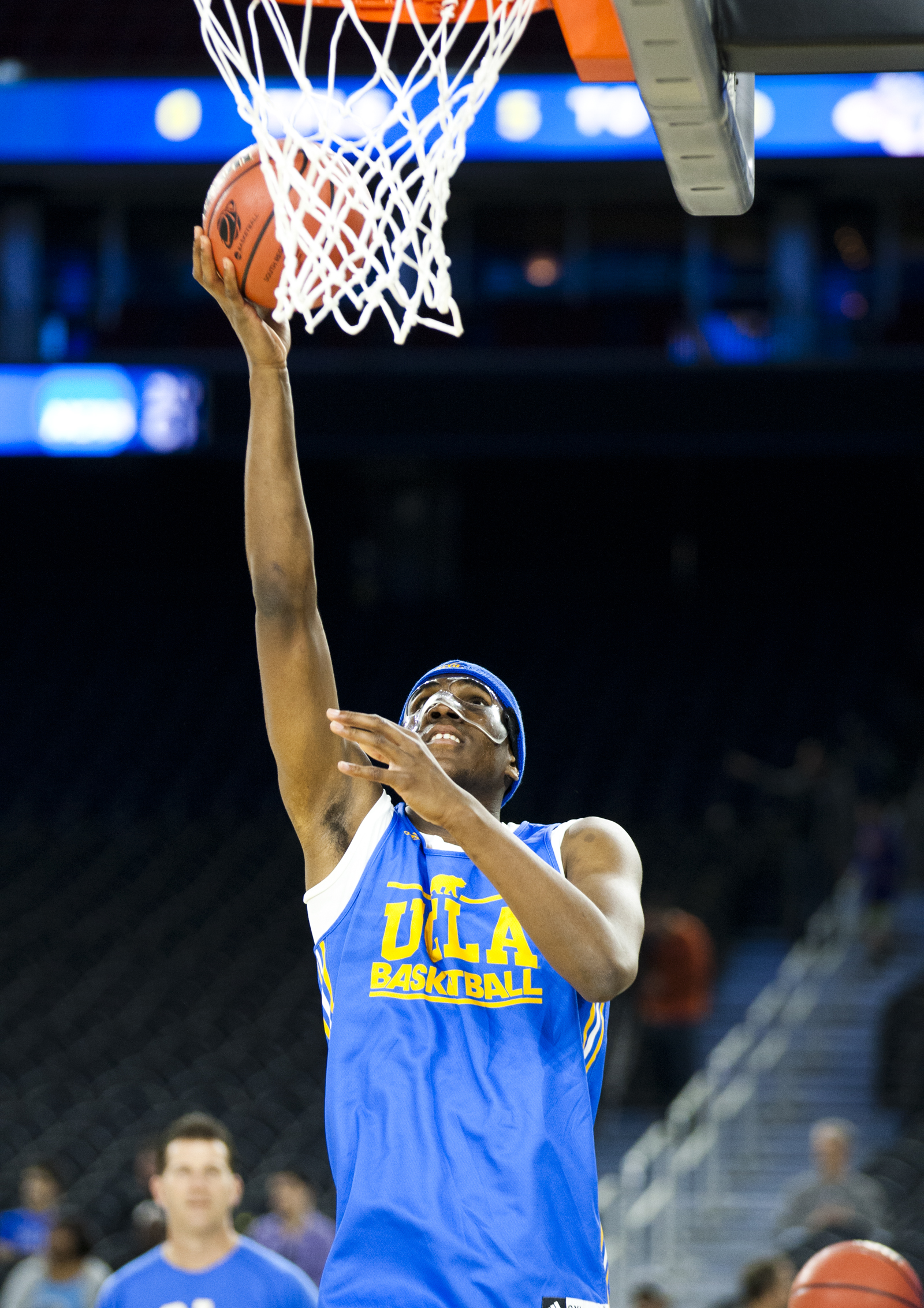 Freshman forward Kevon Looney goes up for a layup during Thursday’s practice at the cavernous NRG Stadium, which is where the Bruins will face the Gonzaga Bulldogs in the Sweet 16 on Friday. (Katie Meyers/Daily Bruin senior staff)

HOUSTON — Bryce Alford rose up for a 3-pointer and released, only to watch the ball clank off the side of the rim.

The next shot hit the front of the iron.

A puzzled look crossed the sophomore guard’s face as he glanced around at the towering black curtains draped behind the basket and the 60,000-plus seats around him, mostly empty.

Basketball in a football stadium. The Bruins in the Sweet 16.

There’s a lot to be puzzled about.

Though many may still be wrapping their heads around the idea, No.11-seed UCLA is prepping for its matchup with No. 2-seed Gonzaga in the semifinal of the South Region on Friday night at the NRG Stadium.

“You get to go out there and see how big the stadium is. The scoreboard is huge, the court is elevated,” Alford said. “It’s hard. You’ve got to get used to the shooting. It’s definitely different.”

What may prove a more difficult task is slowing down a Bulldogs (34-2) offense capable of shooting the lights out on any court.

That includes UCLA’s own floor, as Gonzaga raced out to an 11-point halftime lead and left Pauley Pavilion with a 58.5 percent shooting percentage and an 87-74 victory.

The Bulldogs haven’t cooled off since. They enter Friday’s contest as one of the nation’s top shooting teams and have scored less than 70 points in just six contests since that Dec. 13 meeting. Gonzaga is led by versatile forward Kyle Wiltjer, who has averaged 23.5 points on 75 percent shooting through two tournament games.

If that stat line seems familiar to UCLA, it’s because it’s almost exactly what Wiltjer put up at Pauley Pavilion, as the junior forward torched the Bruins for 24 points on nine-of-13 shooting.

“He got real comfortable. I have to try and speed him up and try to make him do what I want him to do and not what he wants to do,” said freshman forward Kevon Looney, who figures to spend much of his time Friday defending Wiltjer. “He can really post and he can really shoot it. I have to play physical with him and try to run him off the 3-point line.”

Trouble is, even if Looney is successful, the Kentucky transfer is hardly the only player on Gonzaga’s roster capable of getting hot from deep.

The trio of Gary Bell Jr., Byron Wesley and Kevin Pangos presents an experienced backcourt of seniors. Pangos currently resides as the Bulldogs’ hot hand after shooting a combined eight of 16 from beyond the arc in Gonzaga’s first two NCAA Tournament games.

A four-year starter, Pangos has shot better than 40 percent from 3-point each season in Spokane and averaged 4.9 assists to 1.3 turnovers per game as the Bulldogs’ primary ball handler this year.

“He’s heady, smart, he makes few mistakes and hits key shots,” said sophomore guard Isaac Hamilton. “(He’s) a type of guy you have to contain throughout the whole game and watch out for – always have an eye on him.”

The hope for UCLA is that Hamilton’s length can force the 6-feet-2-inch Pangos into an off night like the one he had in Westwood, where he made just three of his nine shots.

Of course even if – and it’s a big if – the Bruins can slow down both Wiltjer and Pangos, the Bulldogs still have four other players who average more than eight points per game. Fortunately for UCLA, it counters with a lineup of five starters averaging more than 10 points per game and a roster playing as well as it has all year on both ends of the floor.

UCLA finally put the pieces of its long-rumored, rarely glimpsed inside-out offense together against the University of Alabama-Birmingham on Saturday, so Gonzaga certainly won’t be the only confident offense on the floor Friday.

“Once we’re able to establish inside presence in the paint with (junior forward/center Tony Parker) and Kevon, the ball just seems to move on the perimeter,” said senior guard Norman Powell. “It opens lanes for us to drive and gives opportunity for Bryce and Isaac to knock down their outside shots.”

Such a performance Friday would give UCLA a fighting chance, though – according to some pundits – still not much of one.

Still, the Bruins will take it.

“We’re still getting doubted even though we’re in the Sweet 16. We’re picked as the 16th-best team here,” Alford said. “That’s still in the back of our head, so we still got some more motivation.”