The Bruin Experiment fosters passion for science at underserved schools 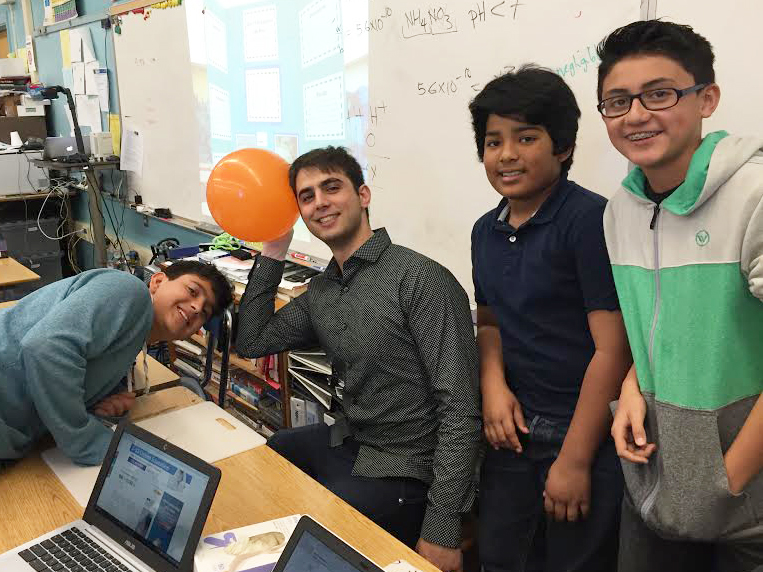 Twelve-year-old William Trimble listed off coding languages that he learned himself as other students tested their experiments around the classroom. Some were rubbing balloons on their heads to test for electricity and others were building solar ovens to make s’mores.

“And now I want to learn how to code in Python,” Trimble said with a grin.

The Bruin Experiment, a club started last year by fourth-year neuroscience students Daniel Haiem and Katie Mowris, aims to help children like Trimble from underserved communities pursue their technological and scientific interests. UCLA students in the club travel once a week to the Los Angeles Center for Enriched Studies, a middle school that is about 8 miles away, where they work with one class of sixth- to eighth-grade students to devise and conduct science fair experiments for a science fair in spring.

Haiem and Mowris started the club because they remembered how they often lacked understanding when conducting science fair projects as middle school students.

“As a kid, I literally repeated my science fair project, which was dehydrating fruit, every year. I dreaded it,” Haiem said. “Then suddenly at UCLA, I had this explosion of love for science, and we thought we could make this happen earlier for these kids.”

The science fair, also organized by the club, will be held April 5 in the Ackerman Grand Ballroom, where students will be able to present their experiments to judges, including their own science teacher Ken Mukai and UCLA biochemistry professor Heather Tienson. The judges will declare three winners out of the 32 students.

Although participation in the science fair isn’t mandatory, all 32 students in the class decided to participate and conduct experiments, Haiem said. The students’ projects range from studying relationships between radiation and bacteria to the effect video games have on adrenaline.

“Some of the things they’re doing are things I didn’t even think about until I came (to UCLA),” Mowris said. “These kids are interested in coding and blood pressure, psychology and depth perception. The kids are so much more intelligent than I think I was at that age.”

Each student was granted $40 to spend on a project he or she came up with. Funding for the experiments came from community partners, including the Jewish Federation of Greater Los Angeles, Hillel at UCLA and UCLA itself.

Club members guided students through background research, helping them formulate hypotheses and focus on the bigger picture of each experiment while encouraging them to learn more about their topics.

After the science fair in April, Haiem and Mowris will begin preparation for next year’s program. In coming years, the club members said they hope to work with the middle school again and with high school students on similar projects.

Michael Quinn, a fourth-year political science student, said he liked being involved with the club because it gave him the opportunity to explore a field he normally would not in his major.

“Right now, I’m working with a kid who is testing how depth perception affects a basketball shot,” Quinn said. “Unfortunately, I can’t make it every week, but whenever I come, the kids remember me and are excited to see me and have me help.”

The members of the club said they hope to make a lasting impact on the middle school students, beyond just helping with experiments.

“We’re building a connection that I hope is lasting, not just for this project but for in the future when they get ready to go to high school or college,” Mowris said.

In the future, Haiem and Mowris hope to work with as many schools as they can in the local area and continue to help underserved communities.

“I don’t think they’re going to forget us,” Haiem said. “If I had such an experience at their age, I would look back and think, ‘It was good; I learned something.’”