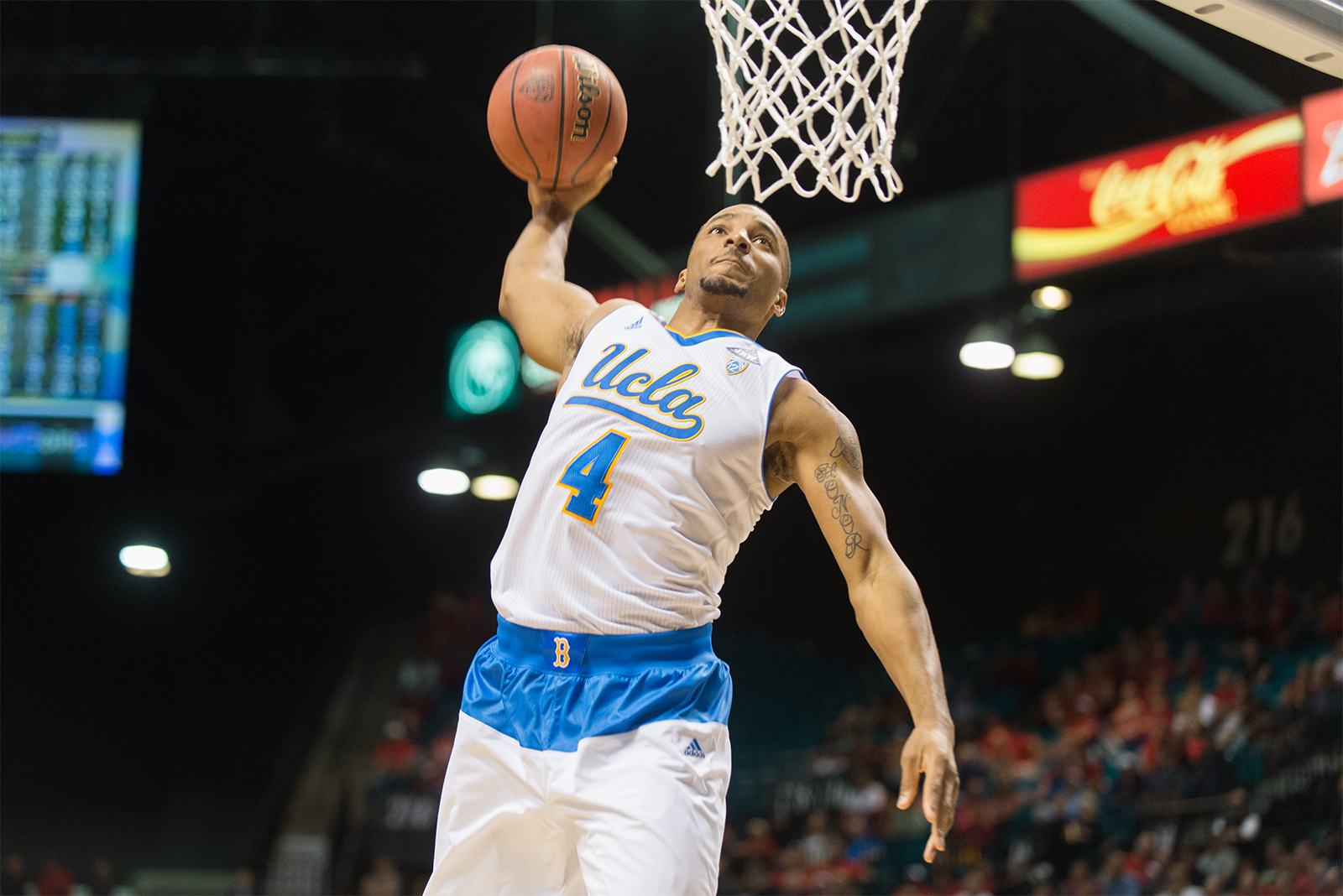 Senior guard Norman Powell will be making his third appearance in the NCAA tournament when the Bruins face the SMU Mustangs Thursday in the second round. (Brandon Choe/Daily Bruin senior staff)

Forgive UCLA if it forgot to laugh.

Scream, shout, hoot and holler: The Bruins are stunningly, shockingly and somehow in the NCAA tournament as a No. 11 seed in the South region – much to the delight of UCLA and the dismay of others.

“UCLA safely in is a joke to me. It makes no sense,” said CBS Sports analyst Doug Gottlieb just after the Bruins’ bid was announced. “They had seven points at the half against Kentucky. … They don’t belong in this field.”

Gottlieb was hardly alone in his incredulity, but it’s UCLA who got the last laugh – and will play No. 6 seed Southern Methodist in Louisville, Ky., on Thursday.

The Mustangs (27-6) are fresh off an American Athletic Conference championship after dispatching defending NCAA champion UConn, and don’t present the greatest gift for the Bruins (20-13), although UCLA is more than happy to take it after nearly everyone counted its tournament hopes all but gone.

Sunday’s announcement was even more shocking given how the first 25 minutes of selections played out. Other teams presumably joining UCLA on the bubble – such as Indiana, Texas and Boise State – had been selected, making UCLA’s slim chances practically invisible.

An already anxious room grew all the more so as the announcements that “UC … Irvine” and the “Bruins of Belmont” had made the field dashed hopes as quickly as they had raised them around the UCLA nutrition room, where the men’s basketball team sat fixated on the television screen.

Then came UCLA’s turn, and with it, controversy, as the Bruins drew the No. 11 seed in the South region.

“We were really excited. Everybody got up, cheering, hugging one another. We were really nervous watching,” said senior guard Norman Powell. “Honestly, whatever Doug Gottlieb said and whatever else anybody said is … not going to do anything but add fuel to the fire.”

In SMU, UCLA gets a team that has been red-hot since the third week of the season. After falling to then-No. 25 Arkansas 78-72 on Nov. 25, SMU has won 25 of its last 28 games, thanks in part to a defense that allows just less than an average of 60 points per contest.

But the Bruins’ inclusion in the tournament seemingly validates their claim that they too are playing their best basketball of the season. Following Friday’s loss to Arizona in the Pac-12 tournament, that assertion from UCLA players sounded pleading, despondent.

Now, though, the Bruins appear confident, eager to take advantage of an opportunity few outside their locker room thought them to be worthy of.

“That’s what you want to see out of a basketball team – they’re playing their best basketball at the end of the season around tournament time, that’s when we’re getting on a roll,” Powell said. “We’re really focusing on our defense and making teams work for all their shots on every possession and really believing in one another. The chemistry is really high and when you have that you start to click.”

When asked by Gottlieb why the selection committee chose UCLA over the likes of a 27-win Colorado State squad or a 23-10 Temple team, Utah State athletic director and selection committee chairman Scott Barnes referred to the Bruins’ strength of schedule, that they were playing well against strong competition and that they passed the “eye test.”

After months of being consumed by scoreboard watching, esoteric metrics and vagaries such as the “eye test,” UCLA need no longer worry: It’s in.

The focus now shifts exclusively to what happens when the Bruins are on the court.

“We know we’ve got a tough task ahead of us. But you get to this point, you want that fourth season (the NCAA tournament) and to get this fourth season and be in the NCAA tournament again and have a chance at the national championship – that’s what it’s all about,” said coach Steve Alford. “I know our guys will be ready, and they’ll put their best foot forward.”