UCLA struggles on the glass, allows lead to slip away in 70-64 loss 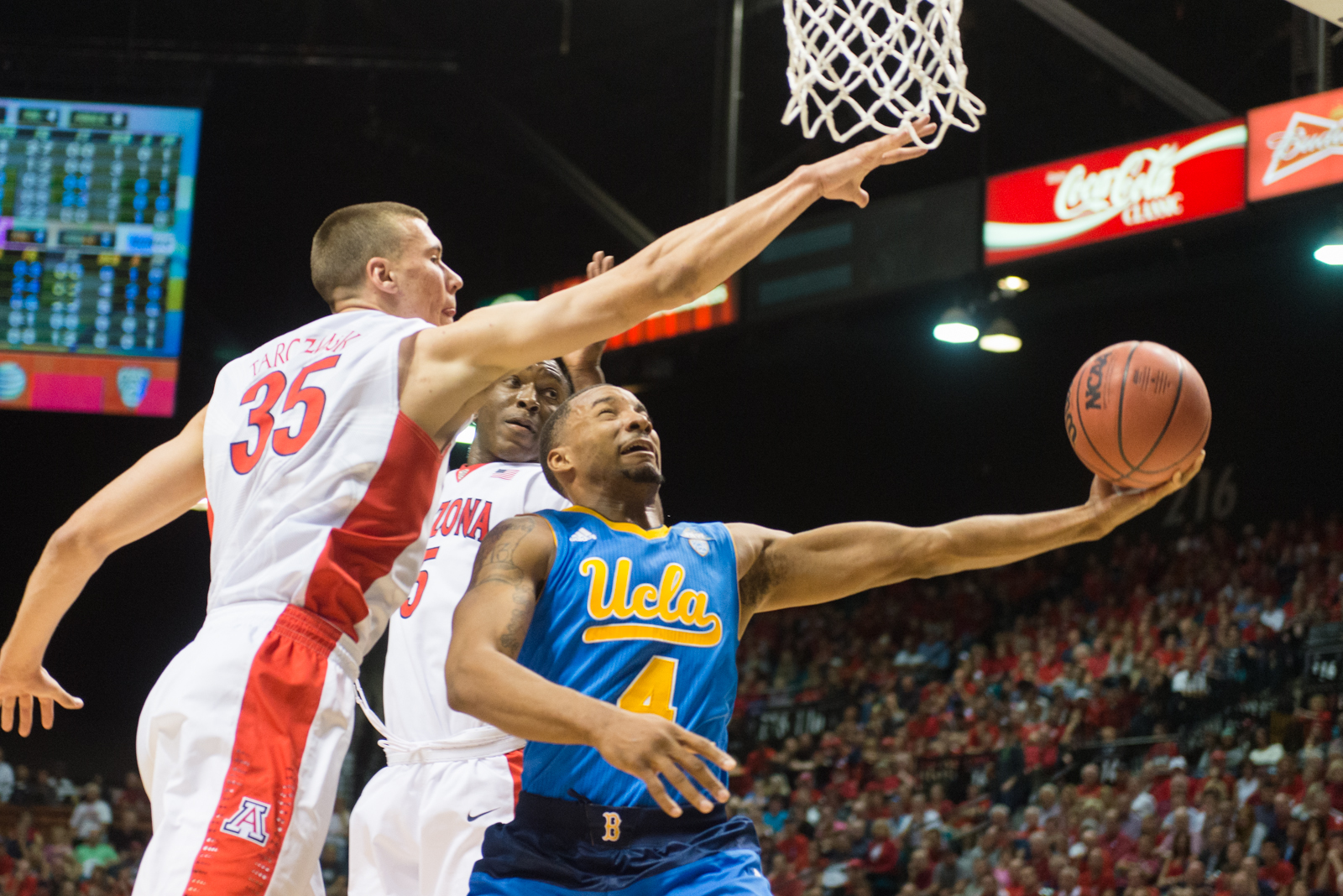 Norman Powell has stepped up his game in the second half many times this season, and he did the same in the Pac-12 semifinal against Arizona Friday. The senior guard scored 15 of his team-high 21 points in the second half of UCLA’s 70-64 loss. (Brandon Choe/Daily Bruin senior staff)

LAS VEGAS — The Bruins didn’t go down without a fight.

In a grind-it-out, do-or-die, physical matchup befitting the MGM Grand Garden Arena, UCLA didn’t back down against No. 5 Arizona.

But at the end of 40 minutes of play, the Bruins finally yielded to what seemed like the inevitable – and to a top-10 team that refused to be beat – falling to the Wildcats 70-64 in the semifinal round of the Pac-12 tournament.

UCLA’s performance Friday was gritty. It was determined. It was resilient. But was it enough?

That’s the question the Bruins (20-13, 11-7 Pac-12) will anxiously ponder for rest of the weekend after letting a seven-point lead with just over 12 minutes left to play get away.

“I’m proud of the way this team fought. I think we still have a great shot of getting into the tournament,” said senior guard Norman Powell. “We’re hoping that we’re gonna get in like a lot of other teams. I can’t believe there are 31 teams out there that are better than us.”

Few were better than Powell on Friday. Spurred on by the momentum that sophomore guard Bryce Alford created with his game-tying 3 at the end of the first half, UCLA’s leader took over the game coming out of halftime.

Powell attacked the rim seemingly at will as Arizona (30-3, 16-2) had little answer for him early in the period. When he wasn’t the one to finish at the basket, he was able to find junior forward/center Tony Parker inside as the duo combined for UCLA’s first 14 points of the half and the Bruins claimed a 47-40 lead with a little more than 12 minutes to play.

But following an Arizona timeout, the Bruins’ offense stagnated while the Wildcats’ – buoyed by an extremely pro-Arizona crowd – roared back to life. Ignited by a dominant effort on the glass, Arizona outmuscled UCLA for loose balls and rebounds, and in doing so took control of the game.

“I let a few rebounds slip out of my hands in the last few minutes of the game,” said Parker, who battled foul trouble throughout. “That’s what sparked their run, and that’s just totally on me.”

Arizona totaled 11 of its 15 offensive rebounds in the second half, including two off of free throws as forwards Brandon Ashley and Stanley Johnson each hauled one in. Freshman forward Kevon Looney – who played with a protective mask after suffering a facial fracture Thursday against USC – was hesitant at times, while Parker had a few mental lapses.

“I just watched instead of trying to tip it to myself like usual,” Parker said of Johnson’s rebound off of a missed Arizona free throw with 8:50 left to play. “Mental mistakes (like) that we can’t make. That probably cost us the game.”

So did not stopping Ashley. The forward was the lone Wildcat to shoot better than 33 percent en route to a game-high 24 points, and served as a key cog in the Wildcats’ 19-6 run that put the conference tournament’s top seed up 59-53 with 2:49 to play.

The Bruins went without a point for a little more than five minutes during the run, and appeared unable to match the fire of an Arizona squad that wouldn’t yield.

“Credit to them, that’s what they do: They win games,” Alford said. “That’s what a top-five team does. They don’t stop. We’re up seven with 10 minutes to go and they don’t stop – they turn up their intensity.”

To their credit, the Bruins didn’t either.

UCLA cut the deficit to as little as two on more than one occasion in the game’s final minutes but failed to ever regain the lead.

Now, the Bruins are left to wonder if their NCAA tournament resume is yet another case of close but not quite – just like the pair of missed 3s launched by Alford and Looney in the game’s final minutes.

“To know that we – if we won tonight – we were probably for sure getting in. That’s for sure what hurts the most,” Alford said. “We put ourselves in this situation. Hopefully we get in, but we’ll let it go how it goes.”