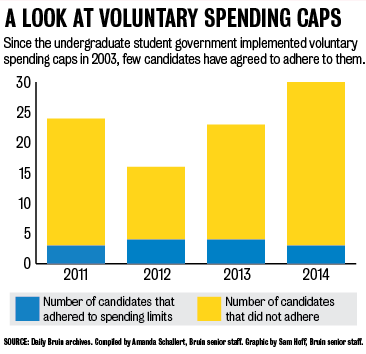 The move marks the first time since 2003 that candidates running for the Undergraduate Students Association Council will be held to mandatory spending limits in their campaigns.

Election Board Chair Shagun Kabra said the board established spending caps to help create equity in the campaign process between slated candidates and independent candidates without access to pooled resources. The decision also comes after some students raised concerns about transparency in funding and about candidates’ overspending on campaigns.

In past elections, candidates were asked to restrict their spending to voluntary limits ranging from $400 to $600, but few candidates complied each year.

Only independent candidates Greg Kalfayan, Cynthia Wong and Savannah Badalich agreed to stick to the suggested cap of $400 in their campaigns last spring. All three ran unopposed for their positions and Badalich was an incumbent.

The other 27 candidates in last year’s election spent between $670 and $1,200 on their campaigns.

While some UC student governments with mandatory caps have lower spending limits, Kabra said he thinks UCLA is not ready to cut campaign budgets to less than $750, plus slate spending. The majority of candidates over the past two elections have spent between $600 to $1200.

Consequences of overspending or lying about expenditures will be decided on a case-by-case basis, but Kabra said possible penalties could include banning the distribution of materials purchased or disqualification, depending on how severely a candidate breaks the rules.