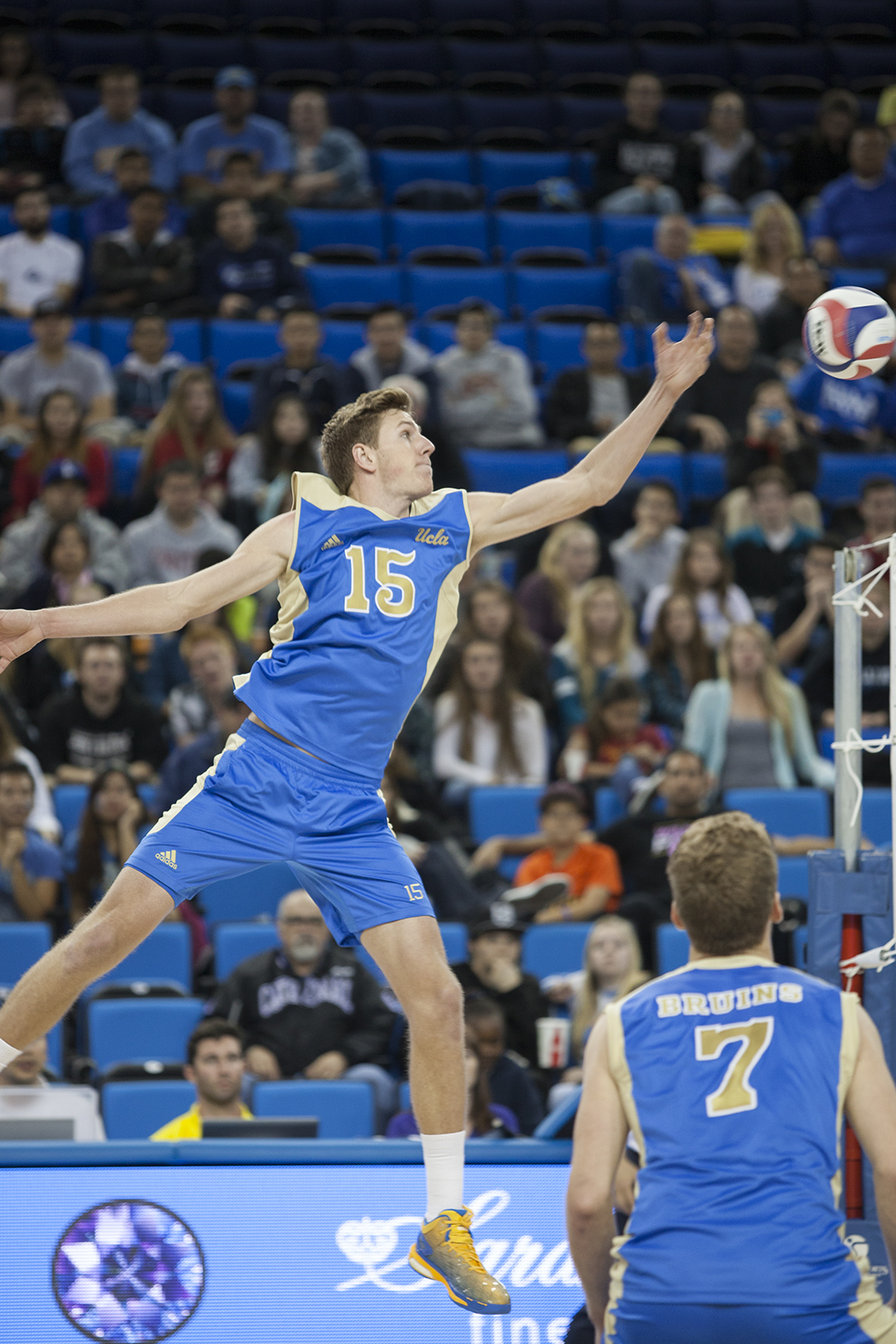 “We’re just gonna try to put some pressure on the (USC) Trojans,” he said. “We’ll make them crack.”

The Bruins did just that Sunday night in Pauley Pavilion.

No. 11 UCLA, the underdog to crosstown rival No. 3 USC, put together its biggest upset of the season in a four-set conference victory.

The Bruins (8-5, 4-5 Mountain Pacific Sports Federation) opened the night with a dominant first set, easily cruising past the Trojans (9-4, 8-4) with a score of 25-15. The Bruin block – something the team has prided itself on this season – shut down the visitors with 16 block assists.

“For the past two or three weeks, we’ve been training blocking really well,” Smith said. “We switched up how we’ve been practicing, so we’re really working on getting a rhythm early and setting our blocking assignment. It’s paid off so far.”

The Bruins lost some momentum in the second and third sets, however. Their defensive front completely disappeared in the second set and added only 3.5 blocks in the third, compared to the eight it tallied in the night’s opening set.

UCLA came back from a 14-9 deficit to win 25-23 in the second set but wasn’t able to do the same in the third, dropping the set by a score of 25-22. The team committed 17 service errors by the end of the third set, and its hitting percentage fell from .318 in the first set to .188 during that span.

With the offense struggling, freshman outside hitters Jake Arnitz and Christian Hessenauer paced the rest of the team with 16 and 12 kills respectively. Arnitz added five kills in the fourth and final set, helping the Bruins complete the upset with a 25-22 victory.

“It feels great to beat ‘SC – it always does,” said coach John Speraw. “I’m proud of how hard we came out, and I thought we were pretty prepared. … It’s just another opportunity to continue to learn and continue to grow. We need to learn how to be able to see the game and make adjustments.”

This was the first of two matches between the two rivals in the 2015 season, and a heavy downpour of rain couldn’t stop 3,081 fans from filling the entire north and south sidelines. Often a quiet venue, Pauley Pavilion was anything but that for Sunday night’s match.

“The atmosphere was just insane – I think it pushed us to play harder,” Arnitz said. “As a whole, our communication was really good this game and the energy was obviously there too.”

UCLA now takes a full week of practices before traveling to No. 4 UC Irvine and UC San Diego this upcoming weekend to continue conference play.