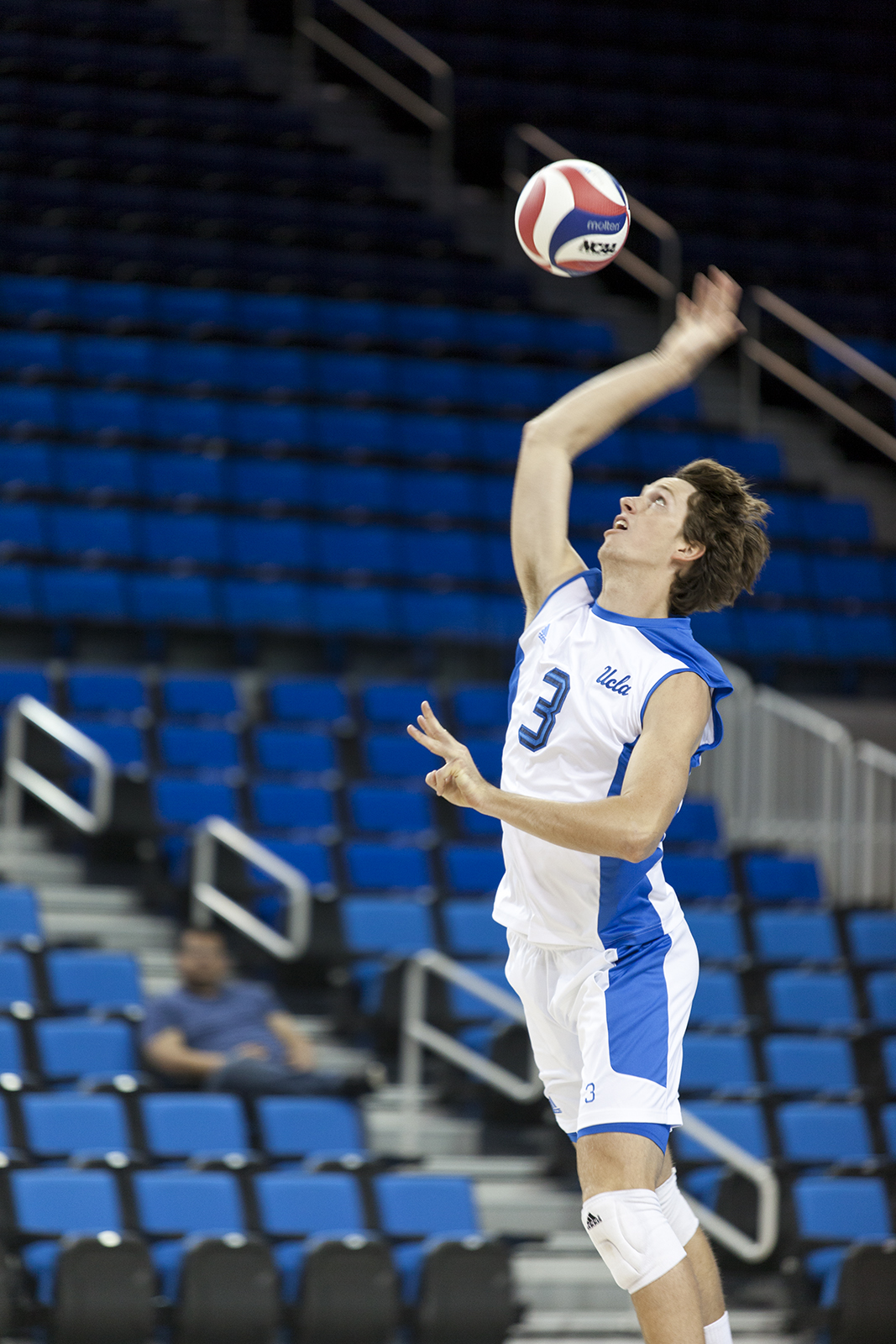 In the last two games, sophomore outside hitter Michael Fisher has made the most of increased playing time, notching a .822 serving percentage for a Bruins team struggling with finding consistency in serving. (Hannah Ye/Daily Bruin)

There’s an imposing blue banner that hangs on the wall of the Student Activities Center gym, listing the 19 national titles won by UCLA men’s volleyball. Players dart back and forth beneath it during practice, running over the name “Al Scates” – the winningest volleyball coach in NCAA history – branded on the practice court.

The Bruins (7-5, 3-5 MPSF) haven’t been playing like a championship-caliber team as of late. The team’s record sits at 3-5 on the conference season after a haphazard opening month that saw the Bruins easily outplayed by highly-ranked competitors and equally bested by less predictable opponents.

No. 11 UCLA’s latest win comes as the team prepares to face No. 3 USC (9-3, 8-3) on Sunday. The Bruins secured their most decisive MPSF win against the floundering Cal Baptist Lancers Tuesday, achieving their second 3-0 sweep of a conference opponent this season.

“I hope that we can continue to slowly build confidence and hopefully we feel like one aspect of our game is starting to get better,” said coach John Speraw. “There are so many areas of the game right now where we’re not as skilled as we need to be and I really think if we can get a little confidence in one area then we can get better in others, too.”

While the Bruins still struggled with minor errors such as over-serving and misconnecting on passes, the team looked more cohesive despite its sloppy play in Tuesday’s victory. With sophomore setter Hagen Smith back in the starting lineup, UCLA has a more vocal leader on the floor in addition to consistent offensive contributors in sophomore middle blocker Mitch Stahl and redshirt junior middle blocker Trent Kersten.

The team is also utilizing its depth more than it did in the early season. Sophomore outside hitter Michael Fisher has seen much more playing time in the last two games and has made the most of it, registering a .822 serving percentage for a team that has struggled to stabilize its serving.

“I never doubted the guys when I was on the bench, and then when I came off the bench I just tried to do the right things, remember the game plan and just execute what the coaches were telling us,” Fisher said.

In the next week UCLA closes out the first half of its season against USC and No. 4 UC Irvine – the two highest-ranked opponents UCLA has faced all season – as well as a road match at UC San Diego.

While UCLA still has to work on executing offensively, it has started to find a rhythm behind leadership from the few veteran players it has such as Smith, Stahl and Kersten. With the majority of the season still left to play, the Bruins’ next three games should indicate how well the team can expect to fare in the postseason and if it can make the conference in April.

With three opportunities against competitive opponents in the next week, the outcomes should indicate whether the Bruins can reach the championship-level play that once defined the program.