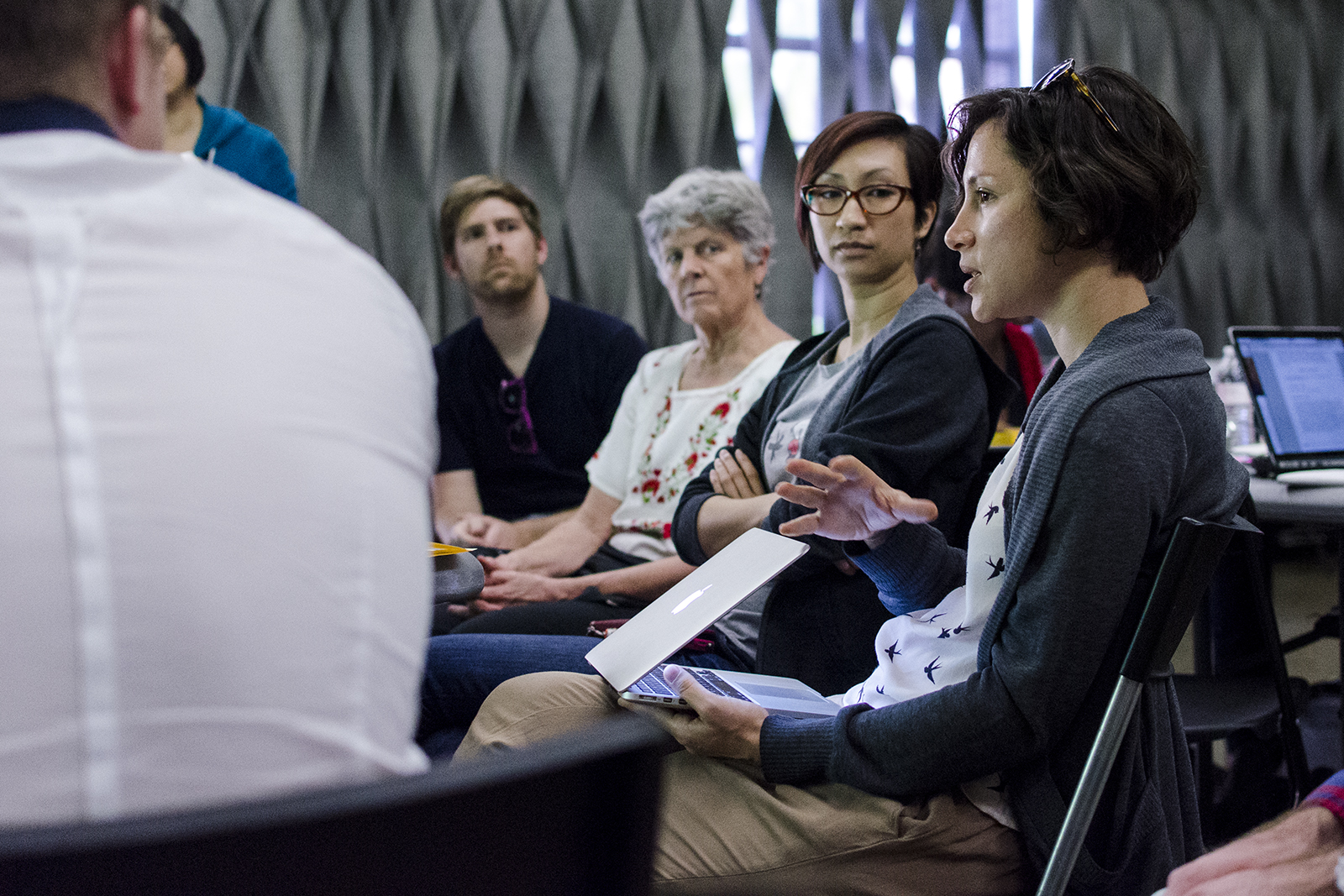 Participants of the Hackathon on Police Brutality Data in Los Angeles County hosted by the UCLA information studies departments discuss strategies on how to begin mining data. (Daniel Alcazar/Daily Bruin)

McGill, co-founder of Youth Justice Coalition and activist in grassroots movements to battle inequities in the police system, worked to do this along with 50 other UCLA students and community members. They gathered at the Hackathon on Police Brutality Data in Los Angeles County held by UCLA doctoral students Saturday, where they mined data shared resources to develop more accessible and consistent police homicide data.

Five doctoral students in the information studies department organized the free event, which was fully funded by the department.

The students, Brittany Paris, Morgan Currie, Irene Pasquetto, Jennifer Pierre and Ashley Sands, organized the hackathon in response to the fatal police shooting of unarmed teenager Michael Brown in Ferguson last summer. The students said they think the data on police homicides in the Federal Bureau of Investigation’s Supplementary Homicide Report is difficult to access. They added that they wanted to look into the inconsistencies in the FBI’s report with the data from the Los Angeles Times’ The Homicide Report.

“We have the tools and knowledge to look through and document these (data), to figure out steps to improve the reporting system on police homicides,” Paris said.

The event kicked off at noon with a presentation from the Los Angeles Times staff that worked on The Homicide Report on gathering data and navigating their database, followed by a presentation on civic hacking by Andrew Schrock.

At 1:30 p.m., the crowd broke into three teams. One team focused on mining and comparing data from the database compiled by the organizers and the Supplementary Homicide Report, while another worked on social media data mining. The third group worked on data visualization, which is expressing abstract data in graphs.

“We are trying to put together the stories and track the race, gender (and other factors) behind the murders,” McGill said.

The social media mining team searched Facebook and Twitter to compare data on social media networks with those from the Los Angeles Times report.

Schrock, who joined the social media mining group, said social media may contain information on police brutality reported by community members not included elsewhere, but it may be hard to navigate and aggregate social media posts.

After four hours of discussion, the groups shared their work.

Based on the hackathon, the database comparison team said they think the Los Angeles Times’ data set and the Supplementary Homicide Report were inconsistent in about half of their reports, which they said varied in the age of victims and the dates and locations of crimes.

The social media mining team said they discovered some unreported police homicides, while the visualization team created a tool that can record the time of each police homicide and sync it with a map.

Lane Goldszer, a graduate student at the Graduate School of Education and Information Studies who also worked on the social media project, said he participated in the hackathon because he thinks data can be used in a harmful way to encourage profiling. He said he felt that his work helped highlight inconsistencies in data that he thinks should be addressed.

Leah A. Lievrouw, a professor in the information studies department and the Graduate School of Education and Information Studies said the department encourages student to hold similar events to contribute to the community.

“(The event) can mobilize people who haven’t had experience (in civic hacking) and help them give back to their community,” she said.

The organizers are presenting The Police Officer Involved Homicide Database Project at this year’s iConference in March, an annual information studies conference of scholars worldwide, which will be held by the Donald Bren School of Information and Computer Sciences at the University of California Irvine this year.

The doctoral students are planning to hold similar hackathon events in the future. The public can access data on police homicide compiled by the group and updated by the participants of the hackathon online.