Alexandra Tashman: Cultural identities should not be politicized 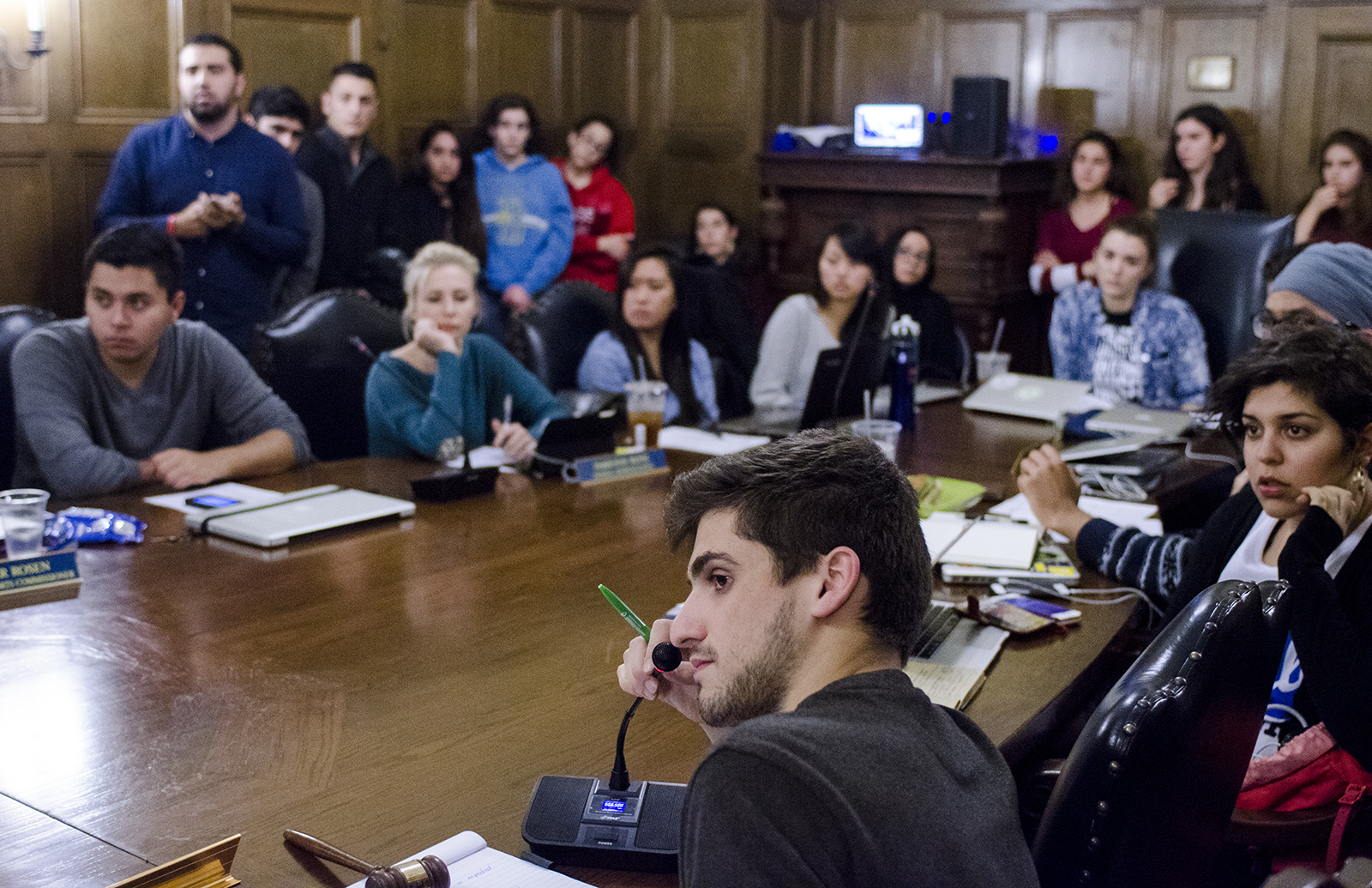 The Undergraduate Students Association Council holds a meeting on Jan. 20. Several councilmembers questioned the ability of a Jewish student to serve as an impartial appointment to the Judicial Board at a meeting last week. (Daniel Alcazar/Daily Bruin)

I remember when I used to be proud of being Jewish.

My family isn’t particularly religious, so as a child, being Jewish didn’t really have anything to do with God or temple. Being Jewish was a cultural identification. It meant eating pastrami sandwiches in old delis and watching “Fiddler on the Roof” with my sister, prancing around our living room with babushkas on our heads as we imitated dances from the film.

Growing up, being Jewish was as much a part of me as breathing. I felt most at home wandering in and out of the stores in the Fairfax District – a historically Jewish part of Los Angeles – where my family’s business was, the smell of bakery fare like chocolate babka and rye bread in the air. I loved the traditions of my people, our music and our humor.

Being Jewish made me feel special and unique. Even when I faced anti-Semitism, when people asked me where my horns were or called me a kike, I wrote off the experiences as anomalies, as actions of the uneducated.

Unfortunately, in my four years at UCLA, I’ve found that bigoted, discriminatory and offensive commentary is equally as endemic to the well-educated.

At last Tuesday’s Undergraduate Students Association Council meeting, several councilmembers questioned the potential appointment of Rachel Beyda, a second-year economics student, to a position on the USAC Judicial Board.

Putting aside the baselessness of such accusations – the board doesn’t rule on Israel-Palestine – the comments were outright discriminatory and anti-Semitic, a disappointment to all students who hold their representatives to standards of fairness.

But moreover, the event was indicative of a larger problem on campus, in which people’s identities are politicized without their input, their cultures made divisive without taking their personal views into account.

The problem reaches beyond Beyda.

Our student government is divided along two lines – one in favor of divestment from American companies invested in Israel and one against.

As the discussion has developed over the last two years, the views on this conflict have become more extreme on both ends, congregating at the fringes in a way that leaves little room for moderates, like myself, in between.

And this incident is a direct result of that.

No one asked Beyda what her politics were. And even if they had, political views or religious affiliations don’t make someone incapable of unbiased decision making or effectively fulfilling the obligations of a job.

That we have reached a point in 2015 where it is acceptable to support denying a student a position outright, merely because she is Jewish, is unbelievable.

It’s the same logic that was used to deny Jews government jobs in Nazi Germany in 1939 – the argument that we, as a people, have divided loyalties and so we cannot effectively perform secular jobs. It’s a view that’s bigoted no matter who it’s applied to – many people said the same of presidential candidate John F. Kennedy in 1960 because he was Catholic and might be loyal to the pope.

Yet, as views have moved to the fringes, they have also become narrower. You’re either with one side or against it, which leaves no room for nuance or grey area.

But to me, Judaism had always been apolitical. I grew up knowing about the politics of Israel-Palestine, but naively never grasped how they applied to me. I didn’t notice how much divestment politics were affecting my own identity expression until I suddenly realized, this past September, that I was hardly Jewish at all.

I had cut Jewish words, Jewish activities and Jewish foods out of my life. I had even stopped telling people I met that I was Jewish.

Because, frankly, I was scared to speak up.

In the two years I have been following the divestment dialogue on our campus, I have found myself pulled in two distinct directions.

On one hand, people expect me to apologize for my Jewish heritage because of actions I have nothing to do with. And on the other hand, people assume that because I am Jewish, I will support Israel no matter what.

But I don’t want to anymore.

I am proud to be descended from Israelis, proud of my great-grandparents’ bravery in fleeing from the Holocaust to come to an unknown land.

But I am also ashamed of much of Israeli policy, saddened by children who have lost their homes and disgusted by actions that have left them destitute and isolated.

And while I am in favor of students taking a stand on global issues and voicing their concerns about the world in a concrete way, I am tired of the way slate politics along divestment lines has destroyed my campus culture and made me silent.

Because even though cultures have the right to be political, the right to champion causes that affect them and use their identities to drive a cause, I don’t have to let other people define my experience for me. My identity can’t be politicized to make your constituency happy.