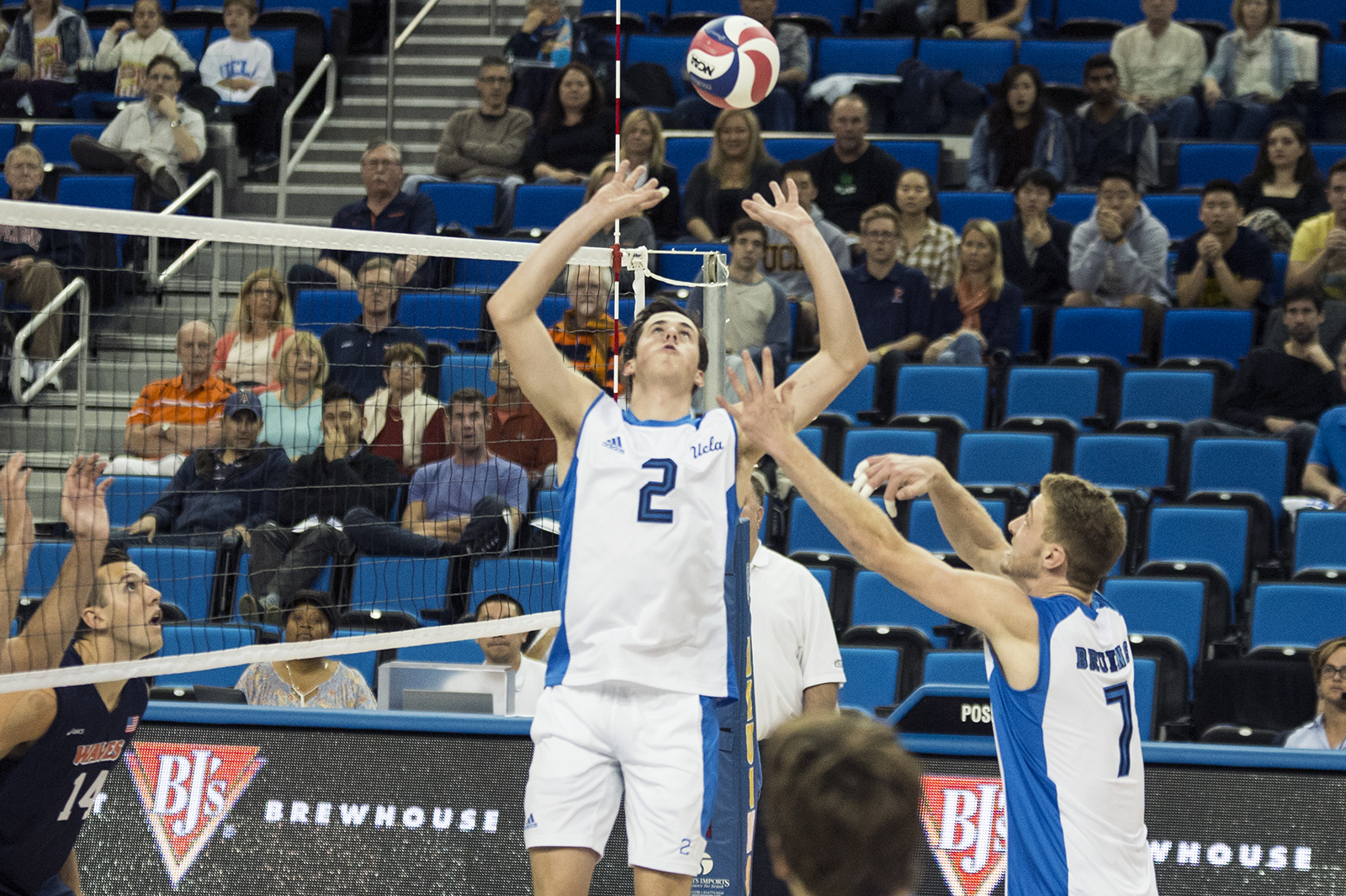 Round, leather volleyballs shot out of a contraption in the middle of the Student Activities Center gymnasium, firing toward a row of Bruin outside hitters. This new practice strategy was an attempt by the No. 9 UCLA men’s volleyball team to prepare for No. 13 Stanford.

“They need to learn how hard they need to work, how focused they need to be in training or when we’re looking at video and a game plan,” said coach John Speraw. “I don’t think we’ve even reached our full potential for how hard we can focus and work. I don’t think they understand what that takes to be a champion yet.”

UCLA men’s volleyball was outplayed by No. 5 Pepperdine Tuesday night – the 3-0 scoreline revealing a team that failed to execute as well as a program missing veteran leadership and league experience.

UCLA’s problem does not lie solely in its lack of upperclassmen. The upperclassmen’s lack of performance and willingness to step into their leadership roles also hurt the Bruins, Speraw said.

Speraw said that he needed a higher level of skill from the few older players he has. On a team of newcomers and second-year players, the three who are battle-tested need to come ready to play, said the coach.

“I just feel like we’ve go to do a much better job all around. I got a couple seniors, but they’ve got to play like seniors. Right now, we look like a young team,” Speraw said.

Playing like a young team has the Bruins’ season off to a slow start. UCLA dropped two in a row to No. 7 BYU on the road in Provo, Utah, to open its Mountain Pacific Sports Federation season Jan. 16 and 17. The Cougars’ also held an upperclassman advantage over the Bruins with three seniors and seven juniors.

“I think our team is pretty young, but that’s no excuse,” O’Dell said.

UCLA fared decently against unranked Princeton on Sunday night, cruising to a 3-0 victory despite the Tigers’ eight upperclassmen. But when it comes to ranked opponents, the Bruins struggle against the prowess of experience.

“This team, it’s a work in progress. We don’t have a whole lot of experience, but we have a lot of time,” said sophomore middle blocker Mitch Stahl. “We just need to get back to the nuts and bolts of the team and do what we do best, and that’s pass and serve.”

UCLA (4-3, MPSF 0-3) doesn’t have much time between its loss to Pepperdine and its next matchup against Stanford (3-4, MPSF 2-2). The Cardinal is another ranked team that once again holds the experience edge over the Bruins, with its two redshirt seniors, three seniors and four juniors.

The two programs were well matched last season, with two of their three meetings going to five sets – both of which UCLA won. Those efforts were led by then-seniors Robart Page, Gonzalo Quiroga and Spencer Rowe, all of whom graduated to play in international leagues.

The Bruins will look to establish themselves as a conference competitor when they meet the Cardinal at 5:30 p.m. in the John Wooden Center’s Collins Court on Thursday.