New Kids on the Block: Christian Hessenauer steps up after tendinitis bout 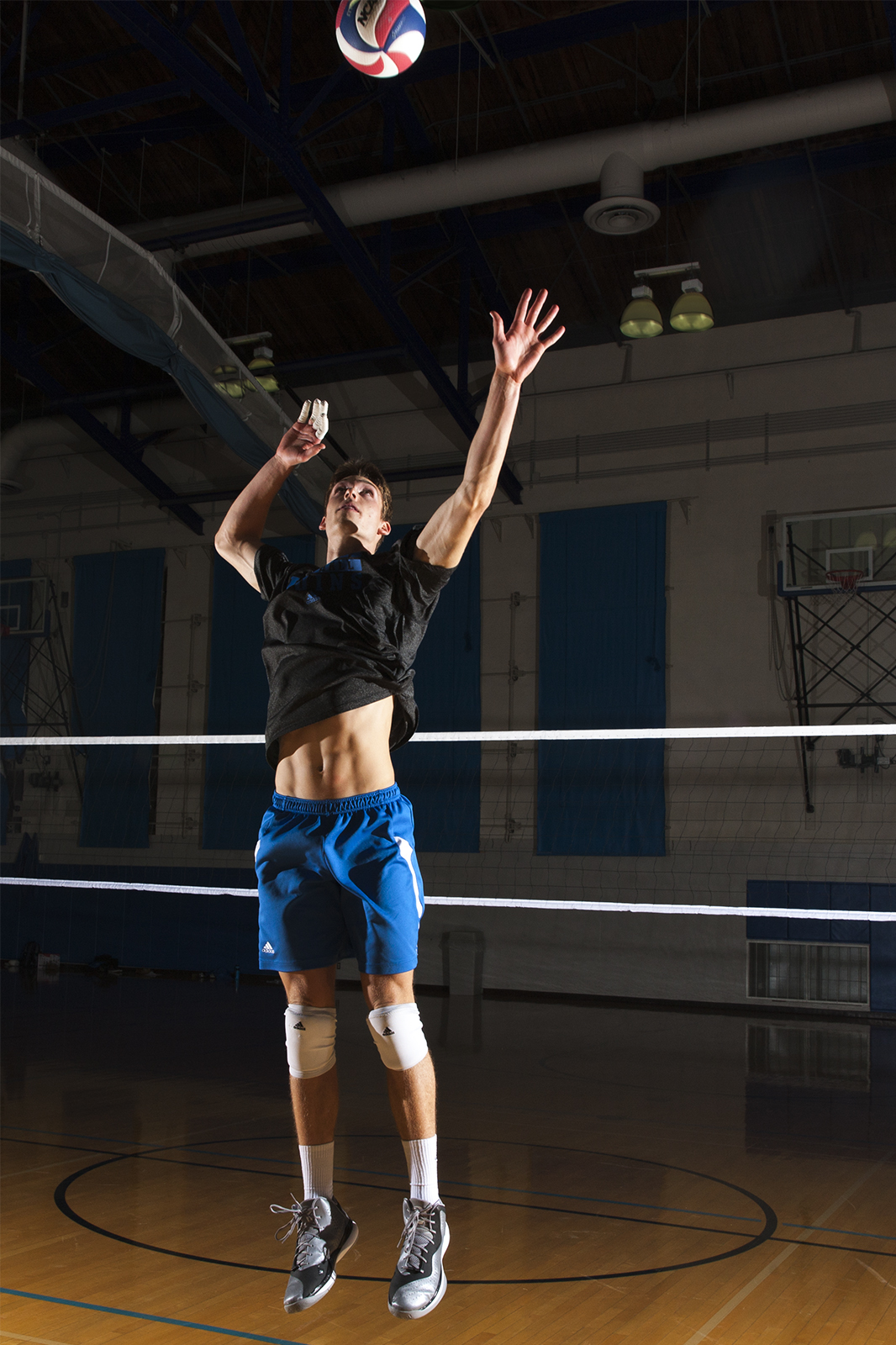 Freshman outside hitter Christian Hessenauer decided to forgo his senior year of high school after developing tendinitis in his knees. Now, with his knees recovered, the new Bruin is ready to contribute significant minutes to UCLA men’s volleyball. (Aubrey Yeo/Daily Bruin senior staff)

Editor’s note: Every Thursday for the next month, the Daily Bruin will be running a series of profiles on the newcomers to the UCLA men’s volleyball team.

Down 20-8 against Pepperdine in the first set of Tuesday night’s loss, UCLA men’s volleyball coach John Speraw needed someone to turn the Bruins’ fortune around. Looking down his bench, he called for No. 17.

It was a moment that Christian Hessenauer could only imagine last year. Plagued by tendinitis in both knees, the outside hitter sat out his senior season for both his Dana Hills High School varsity team and his Balboa Bay Volleyball Club team.

“My knees were really bad, and it was very, very painful to play,” Hessenauer said. “I took that time just to do the basics, rehab my knees and try to recover.”

Hessenauer made the decision to rest his body and prepare for college instead of continuing to push his physical limits.

Despite his hiatus from the sport, his performance over his three years of high school, during which he was named All-CIF and All-League and played in the 2012 USAV Boys’ Junior National Championships, was enough to command Speraw’s attention. Following Hessenauer’s commitment to UCLA, Volleyball Magazine named him one of the top-25 recruits in the nation for the class of 2018.

“At heart, Hessenauer is a very humble, hardworking guy,” Speraw said. “He’s got a real opportunity to learn that work ethic that’s necessary to become a champion.”

Now transitioning to the pace and demand of college-level volleyball, Hessenauer is still playing catch-up from his time away from the sport.

The freshman said that although his knees feel better, the year off meant he lost the opportunity to improve other aspects of his game, creating a steep learning curve in his transition to the next level.

“I think at times when you’re new to a program and less experienced than some of the guys who have been here before, you’re processing a lot of information in a short period of time, which can be really tough to do,” said assistant coach Andrea Becker. “I think Christian takes everything and absorbs it to the best of his ability – he embraces that challenge.”

With the Bruins struggling to find an identity after graduating three starters last spring, Hessenauer has been asked to step up more than most players his age in his first year of college volleyball. With a freshman class of highly touted recruits, Speraw has wasted no time in inserting his rookies into major contributing roles in his lineup.

UCLA’s three-set sweep of Princeton on Sunday was powered by freshmen, with all four – Hessenauer, outside hitter Jake Arnitz, outside hitter J.T. Hatch and setter Eric Matheis – starting the game.

“In a lot of programs you see a true freshman come in and make an impact, but usually there’s just one of them,” Speraw said. “We’re all young, and everyone is just getting thrown in the deep end.”

Hessenauer took advantage of generous playing time against Princeton to post an impressive stat line: nine kills, an ace and three block assists. In UCLA’s current situation, standing 0-3 in MPSF play, the team will need Hessenauer to post similar numbers on a consistent basis while learning to deal with adversity, a foreign concept to most successful high school players.

“People who are used to winning and have never experienced this, it can be pretty shocking,” Speraw said. “Yet it can be a great opportunity to teach them really what it does mean to be successful – how somebody does achieve, hopefully, greatness.”

After his number was called Tuesday night, Hessenauer registered seven kills to go along with one block. His knees now recovered, the freshman is starting to get his legs under him – just in time to make an impact.