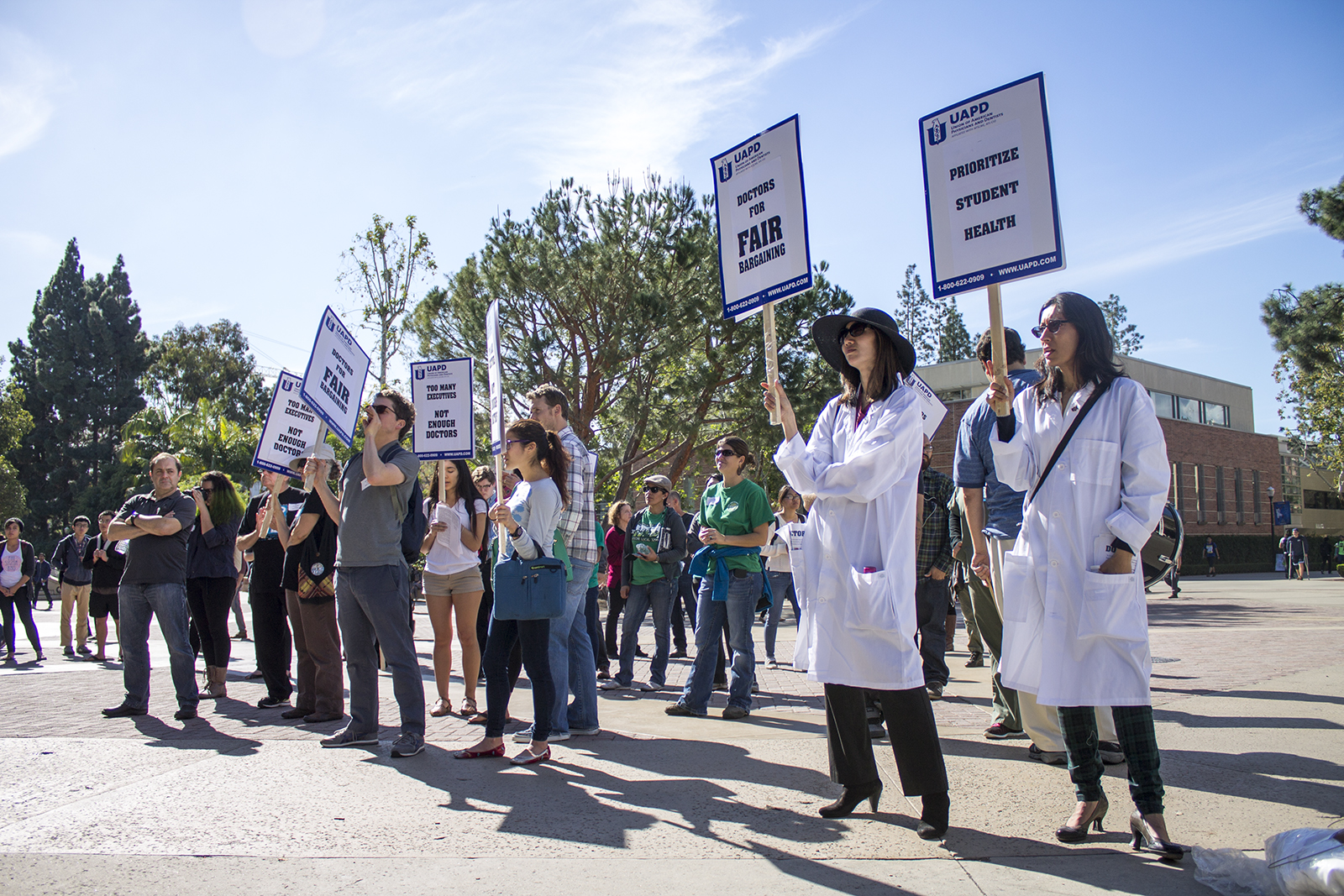 The original version of this article contained information that was unclear and has been changed. See the bottom of the article for more information.

The Union of American Physicians and Doctors, which was chosen in 2013 to represent doctors in the UC’s student health centers, has been negotiating with the Universityfor more than a year for itsfirst labor contract for UC doctors.

UAPD member Dr. Charles McDaniel, a psychiatrist at the Resnick Neuropsychiatric Hospital at UCLA and UCLA Counseling and Psychological Services, said a strike was called to protest what the union says are unfair bargaining practices from the UC’s side over the course of their negotiations.

He claimed that when requested, the UC refused to give information regarding how the funding for the recent increases in chancellors’ salaries was allocated and whether the chancellors’ discretionary funds could have been spent on improving student health centers instead.

The union is also claiming that the University increased how much employees contribute to their pension program before the University and the union could reach an agreement on the matter.

Shelly Meron, UC spokesperson, said she thinks more can be accomplished through negotiations than through a strike.

“We believe the best way to resolve the issue is at the bargaining table, not at the picket line, and we hope the doctors show up for work,” she said.

McDaniel said he thinks the UC is responsible for ensuring that bargaining leads to results.

“We’re still in bargaining, and we would love it if (UC) would come back to the bargaining table and talk in good faith,” he said.

McDaniel said that of the total 150 members of the union at the University, 90 percent voted for the strike.

“We have a right to know about the funds and student registration fees as well as other financial information, but the UC has failed to provide us with that,” said Dr. Mark Ackerman, a union member and physician who has worked at the Arthur Ashe Student Health and Wellness Center for nine years. “This shows how slow the UC has been in responding to demands about our contract changes.”

Dr. Andrea Ruman, a doctor of internal medicine at the Ashe Center, said the strike was also meant to call for more funding for student mental and primary care.

“We want to come to a compromise with the UC and make sure our students get the care they need,” she said.

Both the UAPD and the UC said preparations were made to ensure that the strike did not impact student safety.

Dr. Edith Flores, a doctor of internal medicine at Ashe Center, said the University was informed of the strike 10 days in advance and that doctors were given the chance to reschedule appointments. Flores added that doctors in administrative positions were not allowed to take part in the strike and that they were on duty to deal with any emergency situations.

Meron also said the UC was prepared for the strike and did not foresee any major impact on students. Meron added the University didn’t hire any temporary staff because there were managerial staff and other physicians who were not taking part in the strike and who would be available.

Clarification: The union is claiming the UC raised its pension contributions before the union could reach an agreement with the University.