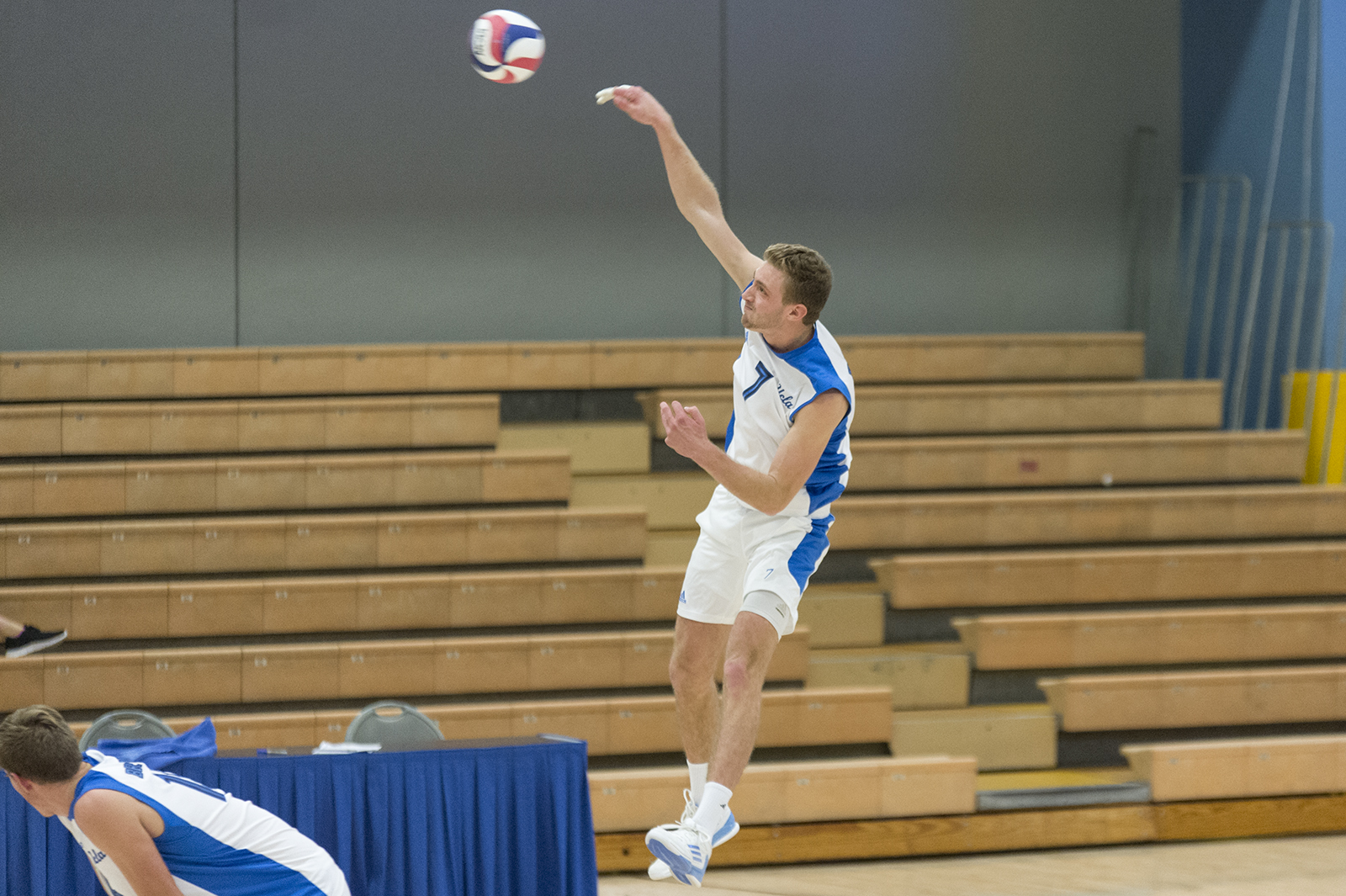 After two losses to BYU last weekend, sophomore middle blocker Mitch Stahl and the Bruins look to redeem themselves at the three-game home-stand starting this Sunday. (Max Himmelrich/Daily Bruin)

The Jumbotron was dark, the stands empty and the arena free of the usual buzz of a packed house.

Pauley Pavilion lacked its hallmark characteristics, but held the same air of competitiveness. With each kill, either scrimmaging side of the UCLA men’s volleyball team congratulated each other before heckling the opposition.

UCLA men’s volleyball may only have been scrimmaging against itself Wednesday night, but the players had a greater challenge in mind.

“This weekend is super tough because it isn’t just one game. There’s three matches in five days,” said junior setter Steve O’Dell. “Basically, I need to figure out how to keep my body in really good shape and win these matches.”

No. 9 UCLA faces Princeton on Sunday night before taking on No. 6 Pepperdine on Tuesday and meeting No. 12 Stanford on Thursday, all games taking place on campus. The three games in five nights contribute to a difficult season-opening schedule which also featured back-to-back matchups with perennial powerhouse No. 4 BYU.

“We have a week here, a week training block, so it’s really important for us to get setter-hitter connection stuff down, better ball control, little things like better touches,” said sophomore middle blocker Mitch Stahl. “We played pretty well at BYU, just had some rookie mistakes that we need to iron out and go from there.”

Following two losses to the Cougars in Provo, Utah last weekend, the Bruins look to redeem themselves and their conference record with the three-game home stand.

“We want to make sure we’re getting better at how we’re playing the game – maybe we will be all season,” said coach John Speraw. “Princeton’s a very good volleyball team, but I’m more worried about how we’re trying to get better at how we play the game.”

UCLA’s upcoming challenge of consecutive games with limited rest will contribute to the Bruins’ continued growth.

“It’s good though because we have a really young team,” O’Dell said. “Being challenged early makes you tough quick.”

The Bruins’ road to toughness started at practice under the bright lights of Pauley Pavilion and will continue on Sunday in Collins Court when UCLA meets Princeton at 7 p.m.