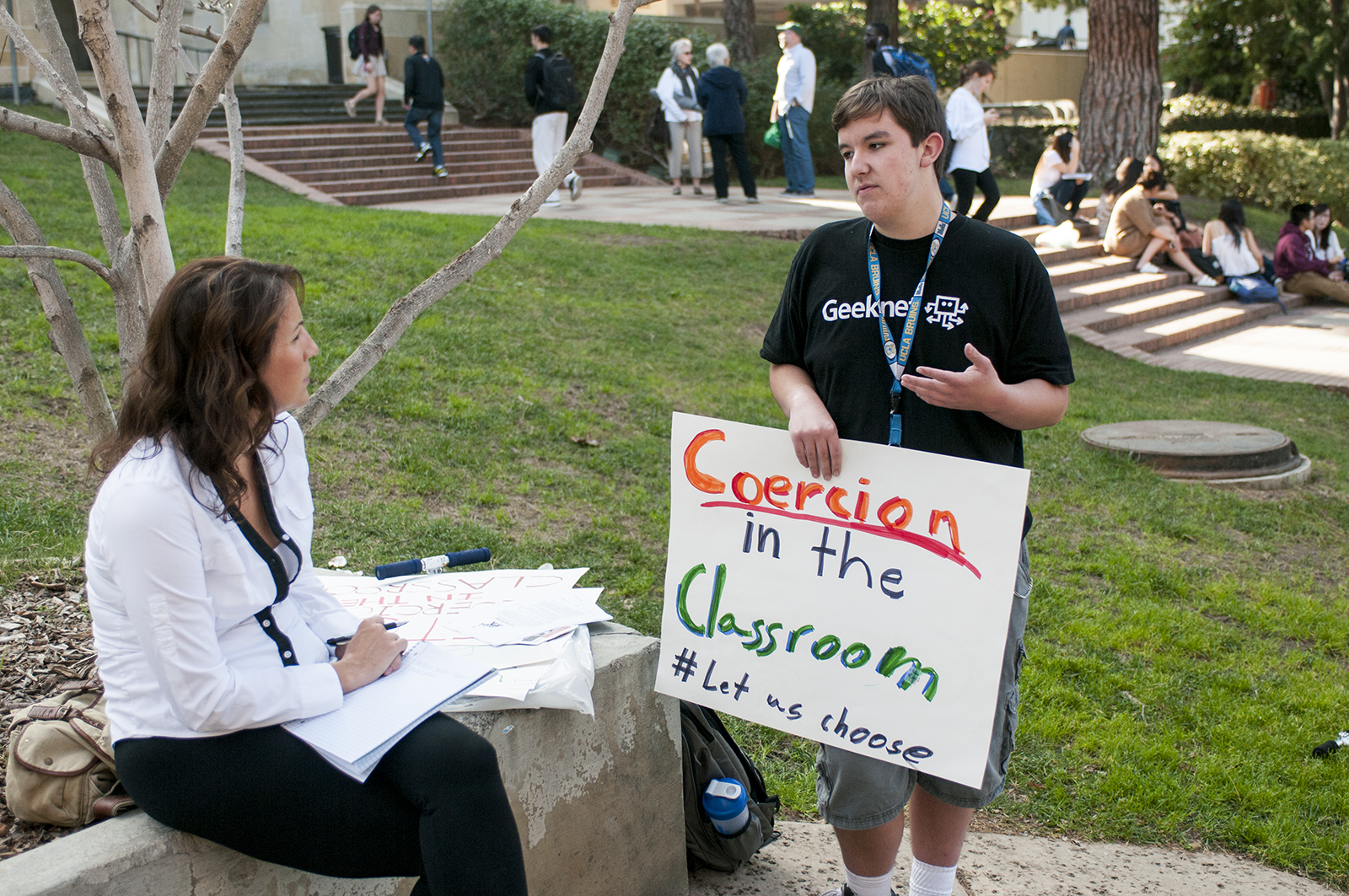 First-year history student Drake Everlove was one of the students to participate in the protest Wednesday. (Angie Wang/Daily Bruin senior staff)

About 10 members of Bruin Republicans led a protest on campus Wednesday afternoon calling for students to urge their professors to vote against a proposed diversity requirement.

Around 3,600 professors from all schools will be able to cast their votes on the requirement proposal starting in late February. The new vote comes after a group of professors and administrators petitioned in December for Academic Senate-wide faculty to participate in the decision. In late October, the UCLA College of Letters and Science faculty passed the requirement in a 332-303 vote, and the Academic Senate approved the measure 85-18 in mid-November.

Bruin Republicans members also recently sent emails to several professors to try to encourage them to vote against the requirement, said Jacob Kohlhepp, external vice president of the club and a third-year political science student.

The requirement would have students take one diversity-related class about inequalities based on factors such as race, ethnicity, gender, sexual orientation and religion. New students in fall 2015 and transfer students starting in 2017 would be required to fill the requirement through one of their General Education courses, electives or major or minor courses. The requirement would not necessarily increase students’ time to completion.

Bruin Republicans members said at the protest Wednesday that they think the diversity requirement would lead to less academic freedom and more strain on students’ schedules.

Kohlhepp said he thinks diversity-related classes should be encouraged but not required by the school because he thinks there will be competition for enrollment in the offered courses.

“It makes choices very specific, and a lot of people will not be able to get into these classes,” he said.

Other protesters said they think UCLA should not have a requirement that would make students take a course they may not be interested in.

“We do value diversity, but we do not believe the school should require it,” said Alex Rhim, Bruin Republicans internal vice president and a second-year political science student.

Some students who walked past the protest said they had mixed opinions about Bruin Republicans’ stance.

“I think it’s weird that within a school of diversity, people are protesting against diversity,” said Jenna Wang, a second-year world arts and cultures student who supports the requirement. “I think we should be happy that we have the opportunity for us to recognize the gift that we do have diversity in our school.”

“I feel strongly pro-diversity, and I think that this new requirement would be helpful for the diversity climate here in this school,” Cross said.

Other students said they agree with Bruin Republicans and think the requirement could burden students who already have to fill other course requirements at UCLA.

Professors are set to vote on the requirement proposal online from Feb. 25 to March 10.