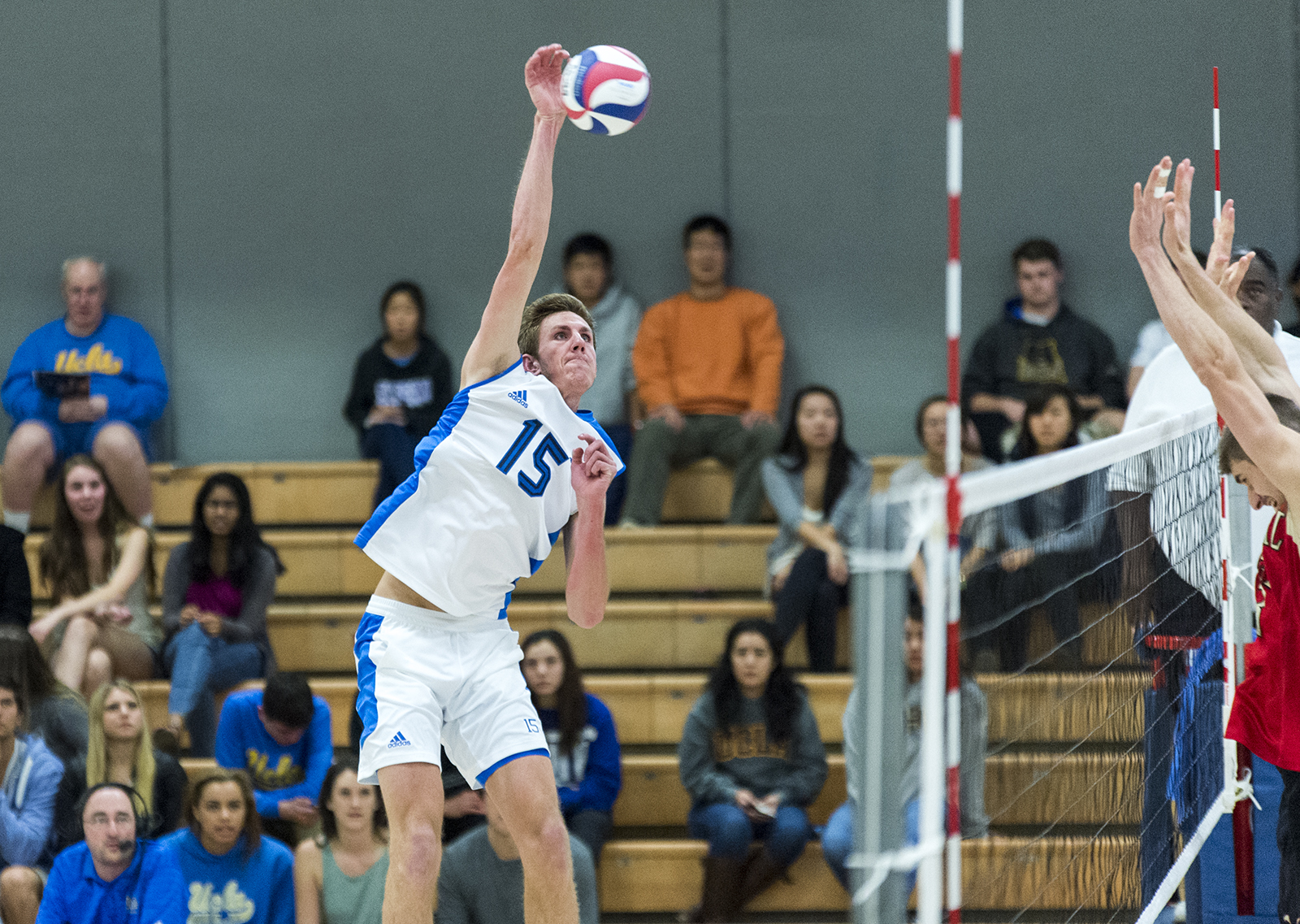 Outside hitter Jake Arnitz and three other true freshman UCLA men’s volleyball players are looking to start a new trend this weekend by beating the BYU Cougars on their home court. UCLA hasn’t won in Provo since 2009. (Max Himmelrich/Daily Bruin)

When UCLA men’s volleyball returns from Provo, Utah on Sunday, the team hopes to bring home something that has evaded it for almost six years: a victory.

Since an upset win over Brigham Young University in March of 2009, No. 4 UCLA has gone 0-7 in away matches against its conference rival. With matches against the Cougars (1-1) Friday and Saturday, the Bruins (3-0) aim to buck that trend and pass their first real test of the 2015 season.

Because it is so early in the season, the team has spent more time trying to improve itself rather than analyzing its opponents like No. 7 BYU, said coach John Speraw. During exhibition matches and the UCSB Asics Invitational, he tried numerous lineup variations in hopes of maximizing the team’s depth.

“I think it’s really so much about how we’re playing the game this early in the season,” Speraw said. “There’s so much I feel like we need to do with our own systems that I don’t know that we’re really quite at a point where we’re starting to talk about what other teams are doing and how we’re gonna scheme against them. I just think we need to do a better job at how we’re playing the game.”

One thing the team focused on in practices this week was serving. In its final match of the Asics Invitational, UCLA found its touch with a school-record 15 aces, but the high elevation in Utah poses a unique challenge. With thinner air, serves often take off and sail further than normal. The team has been making adjustments in practices this week and arrived in Provo, Utah on Thursday to get a practice in before the matches.

For the team’s four new freshmen, this will be their first introduction to the intensity of conference play. Adding to that excitement, this weekend will include a reunion of sorts for freshman outside hitter Jake Arnitz.

“It’s the first big game of my UCLA career so there’s a lot of anticipation,” Arnitz said. “My best friend is on the (BYU) team so there’s been a lot of talk about it for a long time. We’ve been training really hard and having some good practices so I think we’re ready.”

While Arnitz and BYU freshman outside hitter Brenden Sander played together for the Balboa Bay Volleyball Club, they now kick off their Mountain Pacific Sports Federation careers facing off against each other.

BYU, while the reigning back-to-back MPSF champion, was picked to finish sixth in the conference this season. The most notable loss for the Cougars is All-American outside hitter Taylor Sander. Sander was the 2014 AVCA National Player of the Year and graduated last spring with program records in kills and aces. Although the team does return five starters, this season brings more questions than recent years. BYU has already lost a game so far, albeit to No. 2 Loyola-Chicago, the defending national champions.

There may be some uncertainty about the upcoming season for the Cougars, but the Bruins know exactly what atmosphere they’re traveling to this weekend. BYU went undefeated at Smith Fieldhouse in 2014 and averaged an NCAA-leading 3,460 fans per home match.

“We had a long fall season but since we haven’t played a conference match yet we’re all excited to go out there and play in Provo,” said redshirt sophomore middle blocker John Zappia. “No one really knows where they stand yet so it should be fun.”