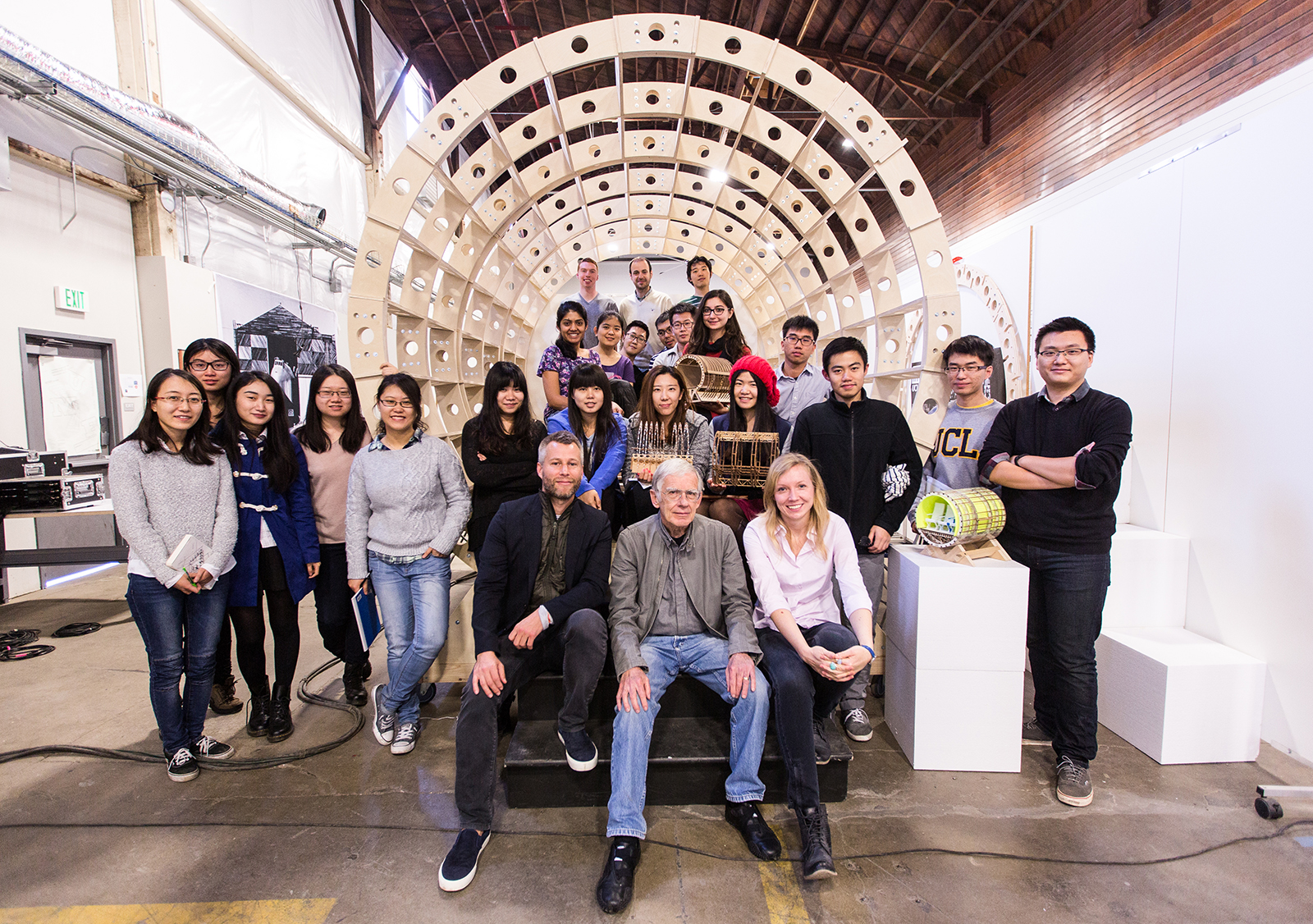 A full-scale wooden model of a hyperloop capsule stood in one room of the studio as students discussed potential designs for it next door, their desks cluttered with illustrations, measurements and laptops running animations of the futuristic transportation system.

The capsule in the making is a pod that may eventually hold around 30 people, and is expected to shoot through a tube at speeds of up to 800 mph, traveling the distance between Los Angeles and San Francisco in 30 minutes.

The hyperloop is a transportation system in progress that first appeared in Elon Musk’s white paper published in August 2013. Instead of a train on a track, the hyperloop is designed to be a capsule traveling at high speeds inside a tube with the help of low air pressure and a nearly frictionless surface. With a small burst of energy from photovoltaic cells on the tube, a capsule would be able to coast for several miles without additional energy, ultimately making the hyperloop self-sufficient.

A group of 25 UCLA architecture graduate students are working on the hyperloop in the SUPRASTUDIO program led by Craig Hodgetts, a UCLA professor of architecture and urban design, as part of masters of architecture II, a one-year graduate program.

“The hyperloop is part of a whole move toward the future and other designs and challenges,” Hodgetts said. “We’re beginning to look at things outside the conventional domain of architecture.”

SUPRASTUDIO, located in Playa Vista, is a huge space used for planning and ideas, giving students access to robots and facilities for their test drives.

“The speed at which we’re working feels like the speed of the hyperloop, it’s so crazy,” said Yayun Zhou, a student of the masters of architecture II program. “I pushed my limits as an architect so many times this past quarter.”

JumpStartFund Hyperloop Transportation Technologies formed in late 2013 as an organization based on worldwide crowd-sourcing to take on the challenge of building the hyperloop. SUPRASTUDIO reached out and formally announced their collaboration two months later.

“It’s a real project that’s going to become a reality in my lifetime,” said Matthew Whitham, a student of the masters of architecture II program. “It sounds like science fiction, almost something out of the movies, but there’s a lot of followers that are really passionate about it.”

Hodgetts said students were divided into teams and spent fall quarter researching and analyzing multiple methods of transportation including streetcars, trains, aircraft and so forth. As winter quarter begins, each team is working out the design and dimensions of the capsule, or passenger vessel. The capsule will ultimately determine the tubing, the supports holding up the tunnel and the final station design.

Whitham said a typical day in the studio starts with small groups and combining all the information they’ve found in the past two days, with about 15 new interesting ideas or concepts coming up every time.

“We like to think crazy from the start, but if each ticket is going to cost about $20, we need to make it very economical, including the production process,” Zhou said. “We need to make it elegant and compact, but we also need to be creative as designers.”

Keys clacked as students made edits to their animations of the hyperloop, refining parts ranging from possible station designs to passenger seating inside the capsule.

Hodgetts said students must work out the details of their designs, drawing their ideas from many different methods of transportation that exist today to create a completely new concept.

“Every facet of this project is novel,” Hodgetts said. “There’s simply nothing that exists today that is practical to incorporate into the hyperloop technology.”

In the first few months, the studio has already proposed multiple changes from Musk’s original proposal, which are all compiled in a 300-page book being released to the public next week.

“The hardest part is being part of a company while you’re still a student,” Whitham said. “As a student, you can be as creative as you want and your ideas aren’t necessarily going to be built in the real world. But everything single thing we do, people take into consideration in terms of what the hyperloop is going to be.”

“If you don’t have to spend much time to go from here to Las Vegas, then you might start to think Las Vegas is right next to you,” Zhou said. “This hyperloop can redefine the concept of time and space.”

Whitham said the company plans on building the first hyperloop as part of a Disneyland ride in Florida or as a full commuter transport system in Dubai or China within the next nine years.

As the number of people working on the hyperloop increases every day, the studio plans to see greater collaboration with other students and professionals.

“I think the most important thing is to be brave,” Zhou said. “A lot of people don’t trust the hyperloop because they think it’s too fast and not safe, and we have to be brave enough to prove to the world that we can build this up.”