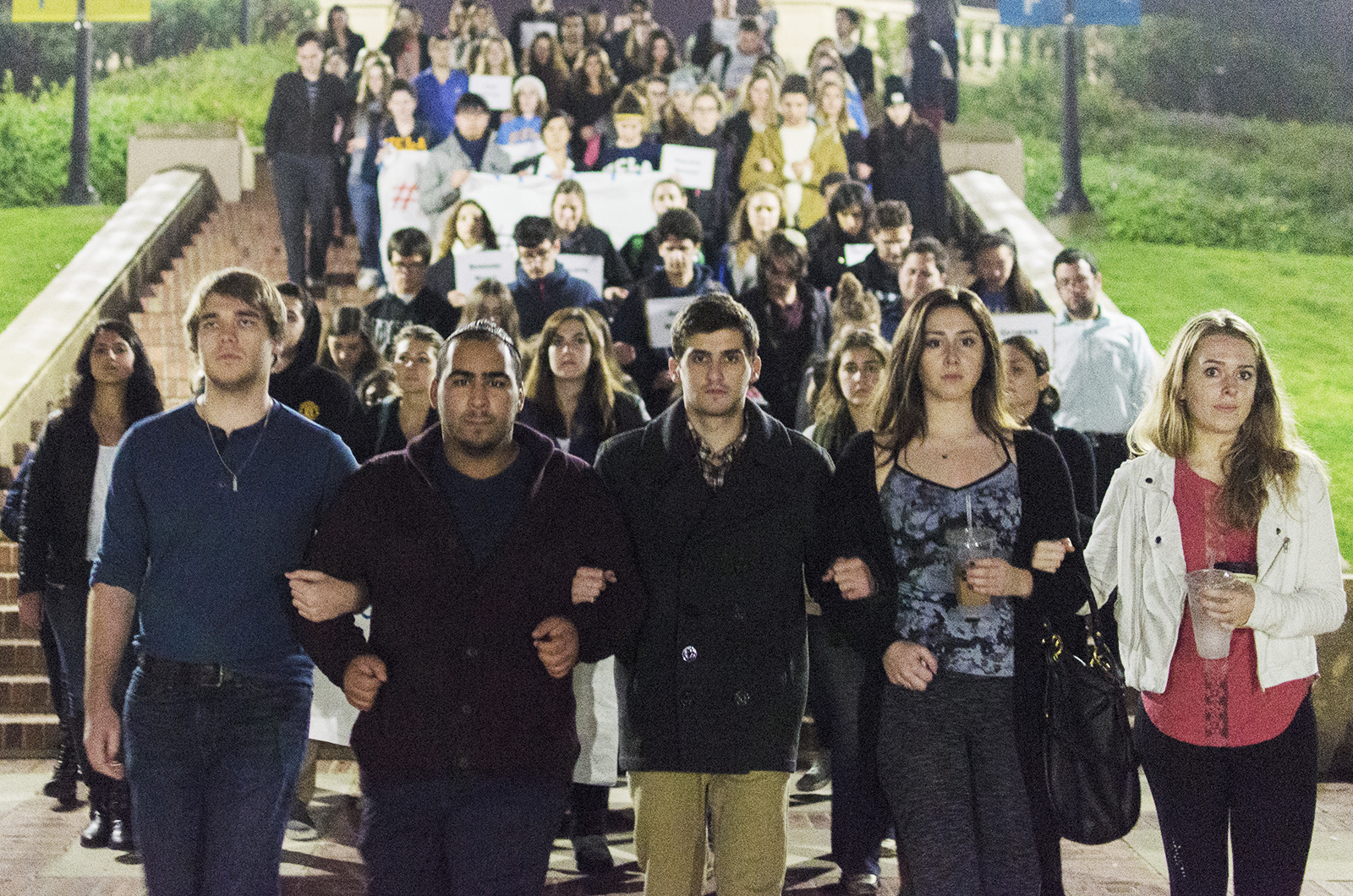 Dozens of students marched silently through campus Monday night as part of a vigil for the victims of the attacks at the French satirical newspaper Charlie Hebdo. The walk through Royce Quad and down Janss Steps followed the solidarity march in Paris on Sunday. (Daniel Alcazar/Daily Bruin)

The article contained multiple errors and has been changed. See the bottom of the article for more information.

About 70 students gathered in Meyerhoff Park Monday night to express solidarity with the victims of the recent attacks at the French satirical newspaper Charlie Hebdo and at a Jewish supermarket near Porte de Vincennes, France.

“I feel a mixture of emotions. I am angry and shocked at the same time,” said Valeria Mazzanti, a first-year biology student at the vigil. Mazzanti said she was shaken by the news because her brother works at the International New York Times in Paris and was also under lockdown during the attacks.

The vigil was organized by several student groups on campus, including Hillel at UCLA, the Undergraduate Students Association Council Office of the President and Eurobruins. Other groups such as the Muslim Student Association also participated.

On Jan. 7, two masked gunmen attacked the Charlie Hebdo office. The attack, which gained international attention, led to the death of 12 people and wounded 11 others. Following the attack, hostages were taken and four were killed at a Kosher supermarket near Porte de Vincennes on Jan. 9.

Natalie Charney, president of Hillel at UCLA, said she and USAC President Avinoam Baral organized the vigil because they wanted to show support for the victims and allow students from different communities to come together in solidarity.

The event ended with a silent march up to Royce Quad and down Janss Steps. Charney, a fourth-year global studies student, said the march sought to emulate the solidarity march in Paris on Sunday where about two million people marched through the city.

Baral said he thinks the vigil brought together people of different communities who have been affected by the attacks.

“As a Jewish-French citizen and a UCLA student, the attack hit me close to home,” he said.

Students from various student organizations spoke during the vigil about what they said has been an increased hostility toward members of the Muslim community following the attacks.

Since last week, dozens of attacks on mosques have taken place in France, according to The Telegraph.

“Unfortunately and unjustly it is happening and we need to prevent discrimination against any groups following the attacks,” Charney added.

Sarah Rahimi, external vice president of the Muslim Student Association, said she thinks hostility and attacks on Muslims after the Paris incident show that people have many misconceptions about Islam.

“One of my Muslim friends told me that her father shaved his beard after the attacks,” said Rahimi, a fifth-year international development studies student.

Mazzanati said she was disappointed by the turnout at the vigil and she had hoped that more people would have come to the vigil.

“I was just in Paris for New Year’s Eve, and I feel like more Bruins should have been here for their support,” she said.

Anya Platt, a fourth-year pschyobiolgy student who studied abroad in Paris last year and lived in the same neighborhood where the shooting was, said the shooting scared her because she had lived so close.

“It hit really close to my heart because that was my home for a while,” Platt said.

Correction: The students also held the vigil to express solidarity with the victims of the supermarket attack in Porte de Vincennes. The Muslim Student Association participated in the event but did not organize it.