Quarterback Hundley struggles as UCLA drops out of Pac-12 contention 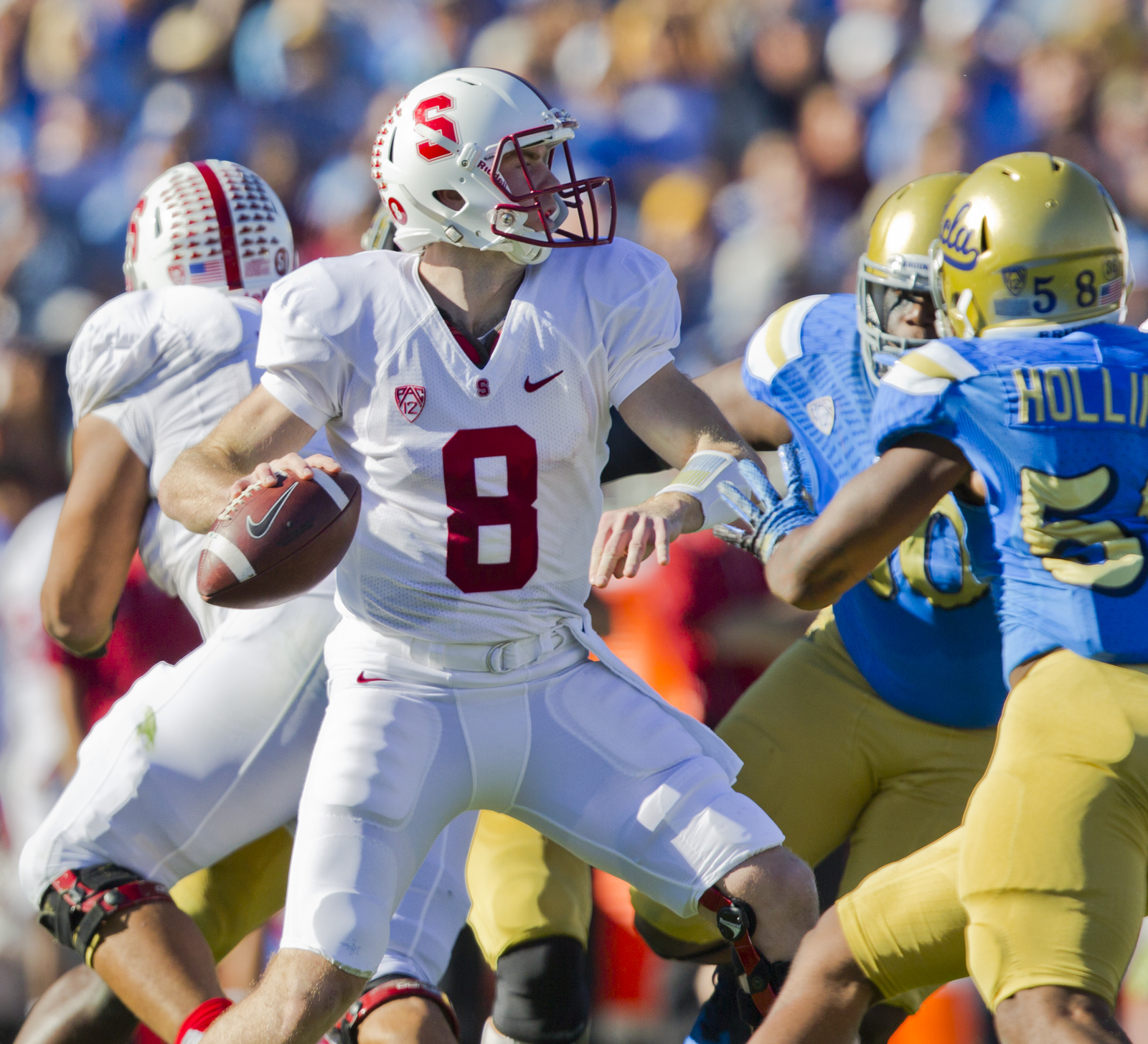 PASADENA — It was all there for UCLA. A Pac-12 South title. A rematch with Oregon in the conference championship game. A path to the College Football Playoff.

And then it wasn’t.

In what was likely redshirt junior quarterback Brett Hundley’s final game at the Rose Bowl, it was the opposing quarterback – Stanford’s Kevin Hogan – who stole the show, and with it UCLA’s Pac-12 and national championship hopes.

The Bruins didn’t look drowsy from a large Thanksgiving feast or distracted by the thought of a spot in next week’s Pac-12 title game.

And they were. Soundly.

“This is the worst (Stanford) has beaten us in the four games we have played them,” said coach Jim Mora. “They are just big and physical. I thought we had closed the gap, but we still have work to do.”

As blue and gold confetti rained down during halftime, any concern that they wouldn’t be enough for a post-game celebration was put to rest early in the third quarter. It wouldn’t be needed.

While UCLA honored former quarterback Troy Aikman with a halftime jersey retirement, its current one struggled.

Hundley guided the Bruins to a five-play, 64-yard touchdown drive on its opening possession, capped by a touchdown pass to sophomore receiver Thomas Duarte, but failed to do much of anything after that as UCLA never found a rhythm.

The Bruins converted just five of 14 third downs, while Hundley was consistently harassed by a thoroughly physical Stanford defensive front, which sacked him five times. In the few instances when the redshirt junior did have time to throw, Hundley completed just 13 of his final 27 attempts before exiting the game with an injured finger after hitting his hand on a helmet in the fourth quarter.

While Hogan put together a complete performance, Hundley couldn’t finish. And neither could UCLA. Its postseason dreams were demolished by a team it hasn’t beat in the last seven tries in a performance that will be sure to raise a few eyebrows inside and outside the Bruins’ locker room.

Given how UCLA had played of late – winners of five straight and looking as impressive as any team in the nation – Friday’s performance was at the very least that.

UCLA led 10-7 early in the second quarter and appeared poised to finally take care of Stanford en route to a rematch with its other Pac-12 North nemesis: Oregon. But then the Cardinal scored 24 straight and never looked back, leaving the Bruins – who had so much to look forward to at the beginning of the season – in an all too familiar position.

“That’s really what we set out to accomplish this season: to win a Pac-12 championship and kinda change things in the Pac-12,” said sophomore linebacker Myles Jack, who finished with 10 tackles. “To be one of the Oregon’s and Stanford’s – that was kind of our motto. We figured this was the year but I guess not.”

Cancel the trip to Santa Clara. Stop watching the scoreboard. And quit analyzing the playoff scenarios.

The Bruins won’t need them. The Cardinal made sure of that.

Instead, UCLA’s regular season comes to an end the same way the previous two have under Jim Mora – at 9-3 with a bowl game awaiting.

But whereas those finales felt like the building of something grander, Friday’s game was a deflation of 11 month’s worth of hype, promise and potential. A revolution still unrealized.

And because of that, this loss stings the Bruins all the more.

“I’m going to hurt for a while with this one, I think we all are,” said redshirt senior linebacker Eric Kendricks, who set UCLA’s career tackle mark in his final game at the Rose Bowl. “We’re going to get back in the film and do what we always do and correct what we made mistakes on and get ready for this bowl game and do it the right way.”