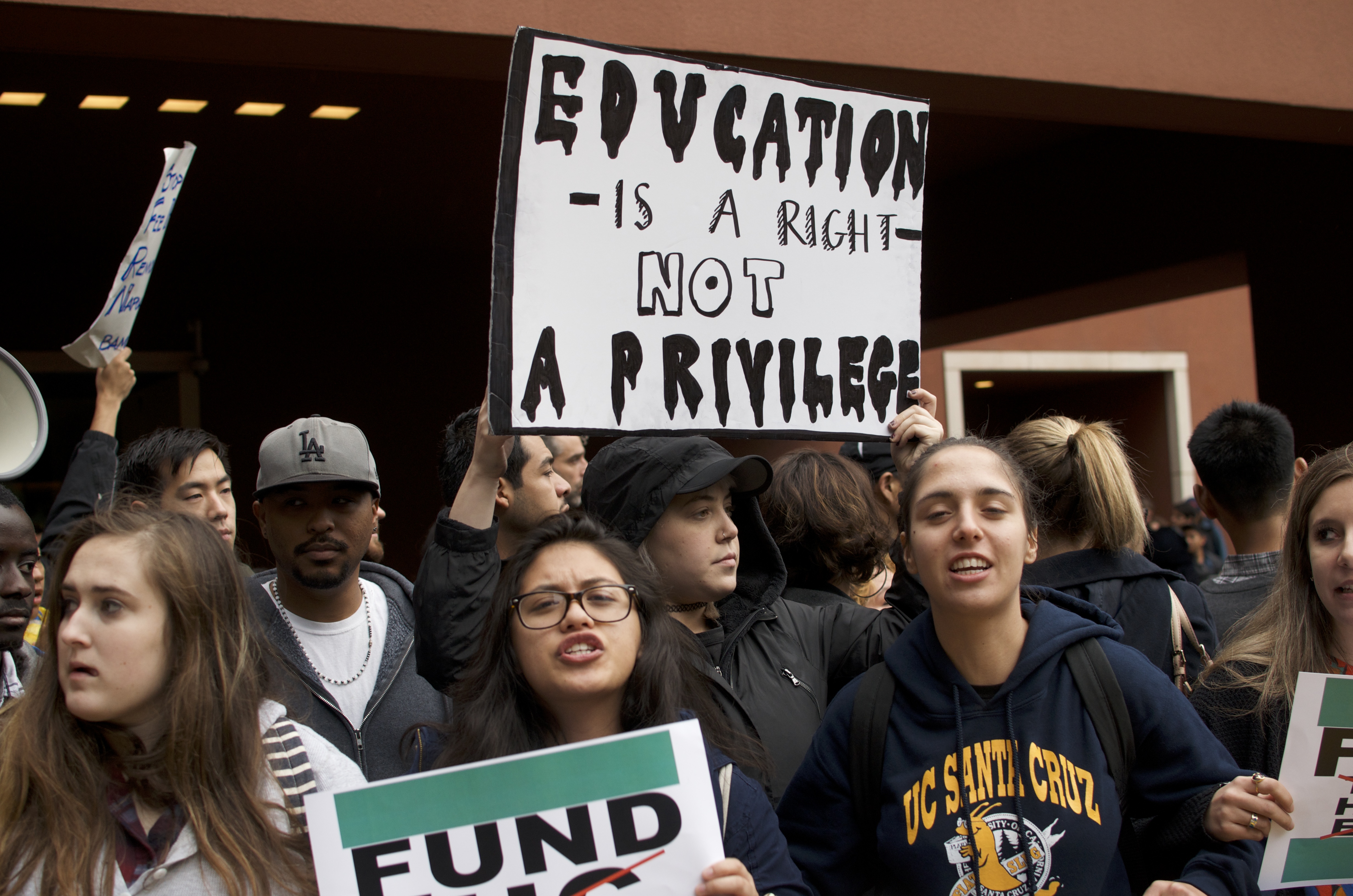 More than 300 University of California students came to the UC Board of Regents meeting Wednesday at UC San Francisco to protest a plan that could raise tuition for each of the next five years. (Daniel Alcazar/Daily Bruin)

A University of California Regents committee voted 7-2 to approve a plan to increase tuition by up to 5 percent annually for the next five years depending on state funding, as hundreds of students rallied outside its meeting Wednesday and protested the plan.

“The plan is not only integral to the stability, but to the vitality of the University of California,” said UC President Janet Napolitano at Wednesday’s UC Board of Regents meeting. “We need to figure out in the real world in which we live, how to bring clarity to, and reduce volatility in, the tuition setting process.”

The full regents board will vote on the policy as its meeting continues on Thursday. The board usually confirms committees’ votes.

The tuition proposal comes in spite of student protest at the meeting where more than 100 students came to blockade the entrances to the regents’ meeting place in UC San Francisco, chanting slogans and shouting “shame” at regents attempting to enter the building. More than 300 UC students attended the meeting in protest of the proposal.

During the meeting, at least one student was arrested after a struggle between students and police, in which a glass door was broken in the rear of the building, university police said. A UC Berkeley student was arrested on charges of felony vandalism and inciting a riot, police added.

A large majority of the speakers during the public comment portion of the meeting spoke out against the tuition hikes, including UCLA student leaders.

“I know today you may be frustrated with the state, but it doesn’t absolve you of your responsibility to keep the UC affordable,” said UCLA Graduate Student Association President Michael Hirshman.

At the UC regents’ meeting in July, the board voted to give up to 20 percent salary raises for three university chancellors, which students who protested outside Wednesday’s meeting said was a bitter pill to swallow.

If the full 5 percent increases are applied over each of the next five years, in-state and out-of-state students could be paying as much as $15,564 and $44,766 in tuition and fees, respectively, for the 2019-2020 school year. This represents a total increase of 27.7 percent from current levels.

Napolitano has said she thinks lower levels of state funding necessitates the tuition increase, which would go toward efforts such as reducing the student-faculty ratio, increasing course selection and increasing enrollment at the University. The plan, the UC has said, would allow the enrollment of 5,000 more Californians over the next five years.

Even with increases in tuition, the amount the UC spends per-student, as well as the state’s contribution per-student, has dropped since the 1990-1991 school year.

Nathan Brostrom, the UC’s chief financial officer, said that without a tuition increase, the University would need to scale back on enrollment of California students and ramp up enrollment on non-resident students.

The plan Wednesday challenges the multi-year funding plan Gov. Jerry Brown had for the UC, which has given the University steady funding increases in exchange for a tuition freeze. The tuition proposal approved by the regents assumes that the 4 percent increase Brown had planned for next year will still happen regardless of the tuition raise, but maintains that more is needed to adequately fund the UC’s educational efforts.

Brown voted against the proposal along with UC Student Regent Sadia Saifuddin.

Brown has remained cautious in allocating large funding increases to the UC, saying smaller increases are necessary for the state’s fiscal sustainability.

On Wednesday, Brown called for a committee chaired by him and Napolitano to examine ways to reduce University’s cost structure while improving access and quality. The committee would look at Brown’s ideas such as developing online education courses, creating consistent lower-division major requirements and starting a process toward campus specialization of disciplines.

“The pressure of not having enough money can force creativity that otherwise can’t be considered,” Brown said. “The only way to keep costs down is to change the cost structure in a more fundamental way than you now have an appetite to.”

Throughout the meeting, both the appointed and ex-officio regents – many of whom are state elected officials – sniped back and forth at each other, shifting blame for the UC’s financial situation on the other party.

“Money doesn’t buy everything in this world. If it did I wouldn’t have anyone working for me,” Brown said. “This is not Wall Street, this is the University of California.”

Other regents countered strongly, repeatedly expressing frustration at Brown for not allocating more money to the UC.

“No regent wants to increase tuition,” said Regent Sherry Lansing. “We have done our part. We are not close to getting what we need, and if we don’t get what we need, we are in danger of damaging this university.”

The regents will reconvene for the last day of their meeting on Thursday at UCSF.