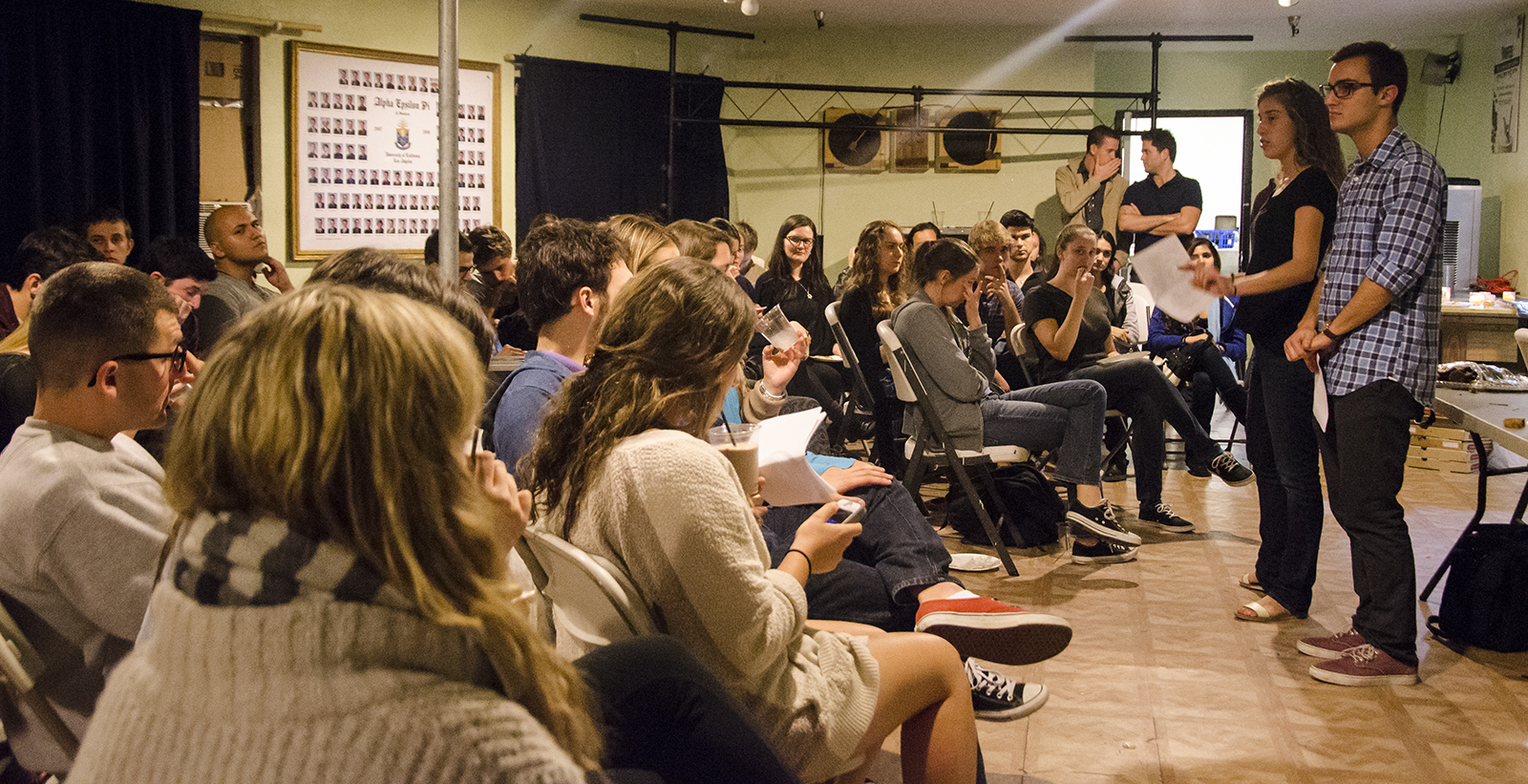 The original version of this article and the photo caption accompanying it contained multiple errors and have been changed. See the bottom of the article for more information.

Pro-Israel students gathered Tuesday night to examine how they think divestment affects pro-Israel and Jewish students and discuss ways to promote and strengthen their communities.

Several Jewish and pro-Israel organizations, including Bruins for Israel, Hillel at UCLA and J Street U, hosted the event at the Alpha Epsilon Pi fraternity.

The event was held as an alternative to attending Tuesday night’s Undergraduate Students Association Council meeting, where the council voted on a resolution calling for the University of California to divest from American companies that some say profit from and contribute to human rights violations in the West Bank and Gaza.

On Thursday, a coalition of pro-Israel organizations launched its Students First! campaign, which asked USAC to shift its focus to campus issues rather than global issues like those surrounding Israel and Palestine. The campaign had garnered about 2,000 signatures for a petition supporting its cause as of Tuesday, said Arielle Yael, a first-year undeclared life sciences student and director of public relations for Bruins for Israel.

Yael said the organization wanted to provide Jewish and pro-Israel students with an opportunity Tuesday to voice their thoughts and opinions on divestment and the Israeli-Palestinian conflict in what she said was a safe and positive environment.

The event began with a memorial in honor of the people who died in attacks in Israel in the past month.

Students stood up, performed prayers for peace and healing in Hebrew and lit five yahrzeit, or memorial candles, in honor of the people who died. Each candle represented a day there was an attack in Israel.

After the memorial, students gathered into groups and voiced their opinions on divestment and the ways they feel the topic is affecting campus climate.

Natalie Charney, a fourth-year global studies student and student board president of Hillel at UCLA, said at the event Tuesday that she felt there was no positive outcome from last year’s 12-hour USAC meeting about divestment held in February. She added that she thinks the resolution and the meeting hurt campus climate, even though the resolution failed.

Charney said Tuesday’s event was meant to welcome different conversations, not just about divestment, but also about the ways some people think divestment can divide communities, and let students voice their thoughts on the conflicts that divestment stirs.

AJ Howard, a fourth-year political science student, said he attended the event in support of the Jewish community.

Howard said he was at the divestment hearing last year and is against the boycott, divestment and sanctions movement because he thinks it targets Israel.

“(Divestment) is not a productive path to peace,” Howard said. “I believe in a two-state solution.”

Howard said he was disappointed to hear what he considered to be hurtful comments from both sides of the divestment debate at the February USAC meeting. He added that he thinks the Israeli-Palestinian conflict is too complex to be addressed in public comments at a USAC meeting.

At the end of the event, students were given sticky notes and encouraged to write ways they want to strengthen their communities.

Yael Zoken, a first-year undeclared life sciences student and a member of Bruins for Israel, said she was admitted to UCLA but deferred her admission to visit Israel. After spending a year there, where she studied at an advocacy school and worked with an ambulance organization, Zoken said she thinks she has an obligation to teach students about Israel and promote Jewish and pro-Israel perspectives.

The students concluded the event by discussing ideas for future events to strengthen the Jewish community on campus, such as a symposium focusing on how to achieve a more positive future for Israelis and Palestinians.

Correction: Natalie Charney and Brian Hertz are speaking in the photo. Howard said he was disappointed to hear what he believed were hurtful comments from both sides of the divestment debate, not just those against it. Students held a memorial for those who died in attacks in Israel in the past month.